The Russians claim that half of the Kerch bridge is ready 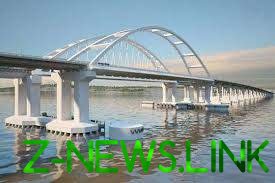 In Russia believe that by the end of next year, will be launched on the automotive side of the bridge.

The Federal road Agency of the Russian Federation have assured that the construction of a bridge across the Kerch Strait from Russia to occupied Crimea, completed “more than 50%”.

The statement of the Deputy head of the Agency Igor Astakhov, which he did on Wednesday in Kazan. “Now, more than 50% of the volume of work on this building done,” he said. According to him, construction is under way on eight marine and terrestrial areas.

Read also: Russian official was beaten subordinates and they have taken the money

“Installation of the arches spans as train parts, and automotive parts – have already been successfully completed” – boasted Astakhov. He expressed confidence that the motion of the automobile part of the bridge will be launched by the end of 2018.