Home / economy / The Russians are switching to cheap bread 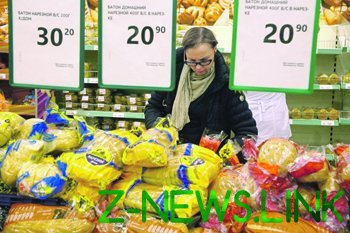 Russians are cutting back on food, many can’t afford vegetables, meat, and anxiety in connection with the coronavirus forced again to enter the family crisis “budget rule”, which often featured a ban on your favorite delicacies. Experts believe that social support needs to be strengthened, as falling revenues and increased anxiety of the Russians because of the uncertainty with the return of the coronavirus may not give promptly restore consumption.

Revenue 96% of the largest greenhouse enterprises in Russia fell by 25% or more, according to a study of the impact of the pandemic on the sector held by the Association “Greenhouses of Russia”. 90% of the representatives of the enterprises of the protected ground noted a drop in demand for vegetable products due to the decline in the purchasing power of the population.

Some respondents, loss of revenue made up more than 50%, said the Deputy of the state Duma and the President of the “Greenhouses of Russia” Alexey Sitnikov.

In the opinion of the majority – 67% – of the representatives of the greenhouse plants, the main cause of the current problems in the industry was the lack of support from the state. Also, according to 17% of businesses, was negatively affected by “unfair pricing of products in retail chains”, which in April attempted to dictate to the low purchase price. And although may was able to restore the status quo in the relationship with trade networks, but, according to Sitnikova, the spring months for the greenhouses was lost.

At retail its problems – after the March excessive demand buyers “went underground” in April with the beginning of the “kasantikul” food fell sharply.

Center for macroeconomic analysis and short-term forecasting (CMASF), citing data from global research company Neilsen reports that in the Russian retail there was an increased demand for cheaper goods. The share of demand for goods of low price segment has grown almost in half of the categories. The greatest sales growth in the low price segment it is noted for meat, pasta, tea, juices. If the share of low price segment of food and consumer goods rose from 16.9 to 17.7% in average annual value, in the category of pasta she grew up with an average 19 to 23%. Another example is the increased proportion of sales of cheap mayonnaise: from 7.3% to 9.5%. Director of work with retailers “Nielsen Russia” Konstantin Loktev previously told reporters that the impact of the pandemic on income indicated 24% of consumers surveyed.

The economic consequences of a pandemic coronavirus changed the preferences of Russians in favor of cheaper bread, said the Executive Director of the Association of producers and suppliers of food products “Rusprodsoyuz” Dmitry Vostrikov. “It turns out the transformation in the cheaper segment, while maintaining the highest margin segment, that is to say that the middle segment is redistributed towards more low solvency of the population, and I think this trend is that, unfortunately, will be maintained,” he said.

“Bakers understand that product prices can not raise the population’s income also fell, and some small businesses, which ceased to exist, they just ended,” said a member of the expert Council of state Duma Committee on agrarian issues and the scientific and technical Committee of the Ministry of agriculture Olga Ponomareva. And the General Director of “Cherkizovo” Sergei Mikhailov said that the country nearly one in six cannot afford to buy meat. According to him, 20-25 million Russians consume no more than 50 kg of meat per person per year, compared to 73 kg, which are required for the assessment of the Ministry of health. According to him, it is about the socially vulnerable layers of the population, whose share will grow.

“Now there are no official statistics on incomes in the second quarter. What exactly happened with them since April when we started the “lockdown”, Rosstat will report only at the end of July, but according to indirect data (reduction of retail trade turnover, for example) it is possible to judge that the income – based consumer demand has reduced significantly, which led to changes in the consumption of the Russians,” – said “NG” Director of the Center for market studies Higher school of Economics Georgy Ostapkovich.

The turnover of retail trade in food products decreased in April 2020 by 15% compared to March and about 9% by April 2019. And in may it increased by 2.7% compared with April (the volume of trade amounted to almost 1.3 trillion rubles), while it was still 8.6% lower than a year earlier.

“According to our estimates, second quarter revenue fell by 15-17%, and, even if there is no development in the worst case scenario with the second wave COVID-19, at the end of the year plus still not decline in real disposable income will amount to 4-5%, and this is a huge sum considering that the total annual incomes of Russians amount to 60 trillion rubles., – says ostapkovich. – Loss of income runs as usual for any crisis scenario: citizens move from consumer behaviors to savings. Households create their reserves and impose its “fiscal rule”, providing funds for absolutely necessary things for them and refusing, for example, from buying delicacies that before the crisis allowed himself once or twice a month even families from low-income”. On people, coming down as a real loss of income and the threat of losing them in the future against the uncertainty of the situation.

According to the expert, the current crisis differs from previous ones – no problems with the banking sector, the country’s accumulated reserves. “The crisis has not destroyed the basic foundations, not by the qualifications of employees, so after the lifting of restrictions, get started and on the background of seasonally lower prices for vegetables and fruits the situation will start to recover. But if the uncertainty of the epidemic will not go away, then this recovery will be very slow, the trend could change next year, because psychologically, the citizens of now a long time will be more cautious when purchasing products”, – the expert believes.

Ostapkovich emphasizes that we are not talking about the small percentage of the Russian population, which finds out about the crisis from Newspapers and food prices interested only out of curiosity. “The majority of the population need to increase social assistance from the state until the introduction of the unconditional basic income, which is now being discussed, for example, in Europe. For the recovery of demand, and of the entire economy, the most important thing now is not GDP growth, not the production equipment or technology. Now more important than reducing unemployment and income growth,” explained Ostapkovich.

“Obviously, we return to the old model of consumption is possible to speak as the restoration of income – said “NG” Director of the Center for agrofood policy, Institute of applied economic research, Ranepa Natalya shagaida. – To talk about recovery is now possible with the big stretch. It is, if you compare week by week: citizens were sitting on insulation, bought only what was very necessary. Now have to leave home to buy something that has enough accumulated money. After the opening of the enterprises of sphere of services of public catering, they have hired workers, have already paid some money, people went to the store.”

But, according to experts, when compared with previous periods, the picture is different: “Despite the high demand for relatively cheap products such as shelf stable, which is especially evident in March 2020 (a growth of 4.7% by April 2019), January–April 2020 the increase in purchases was at the level of accuracy: 0.3%, whereas in 2019, he was in the black by 2.1% relative to 2018”.

As said shagaida, this result was formed due to the fact that after the highest point of excitement in March 2020 purchase of food fell in April by more than 9%. After this fall, any recovery in a week shows growth. “It may not even grow revenues. People have spent their stockpiles in April, began to purchase the necessary and cheap. In fact, in April, was one of the two most disastrous months on purchases of food during the period of our monitoring from January 2013 – added shagaida. – After that it is easy to expect a revival, as it was after a dramatic fall in December 2016. So you need to follow for income and employment.”