Home / policy / The Russian foreign Ministry sent the US, UK and Canada notes protest for LGBT flags at embassies

The Russian foreign Ministry sent the US, UK and Canada notes protest for LGBT flags at embassies 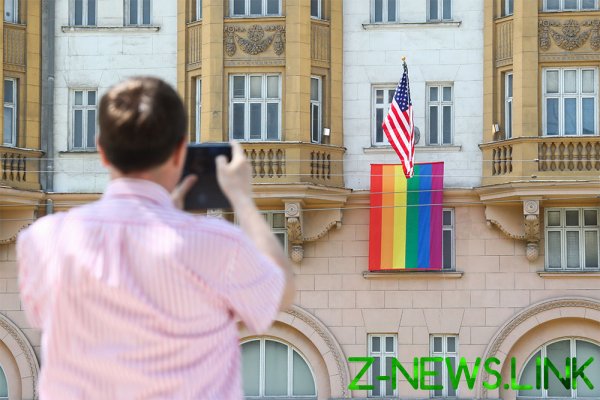 The Ministry of foreign Affairs of Russia sent a note of protest to the US, UK and Canada because posted in June LGBT flags on the buildings of their embassies in Moscow. This was reported on the website of the state Duma of the Russian Federation.

“The foreign Ministry quickly responded to our appeal to the embassies of the US, Britain and Canada sent a protest note, which stressed that their actions violated the provisions of the Vienna Convention on diplomatic relations and national legislation of the Russian Federation”, — said state Duma Deputy Vasily Piskarev, head of the Duma Commission on the investigation of alleged foreign interference in the Affairs of the Russian Federation.

He stressed that the flags were hung “during a vote on amendments to the Russian Constitution, which enshrines provisions for the protection and preservation of traditional family values.”

Recall one of the made in the Constitution amendment says that marriage is a Union between a man and a woman.

Flag of LGBTI persons was created by the American artist and activist Gilbert Baker, and was first raised on 25 June 1978, during the Gay Freedom Day parade in San Francisco.

“LGBTI rights are human rights — said at the U.S. Embassy in Moscow. — Human rights are universal. Pride month is intended to emphasize that every person deserves to live a life free from hate, prejudice, and persecution.”