Home / WORLD / The Rock may back Biden, but most celebrity endorsements are career opportunism… which is why they NEVER come out for Republicans

The Rock may back Biden, but most celebrity endorsements are career opportunism… which is why they NEVER come out for Republicans 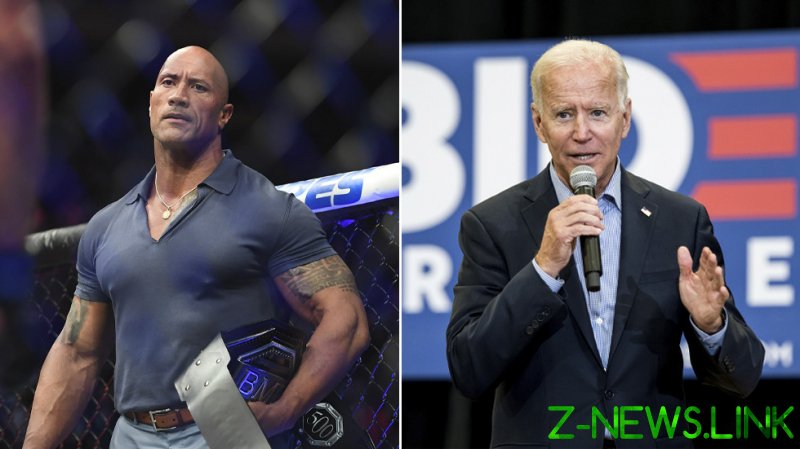 In the aftermath of World War II, homosexual acts were still illegal in Hollywood. Those who wished to identify as gay would use the euphemism ‘Friends of Dorothy’ as a coded way to let other like-minded people know about their sexual orientation. This phrase was taken from the ‘Wizard of Oz’ books. In 1909’s ‘Road to Oz’, Dorothy is told “You have some queer friends, Dorothy.” And Dorothy responds, “The queerness doesn’t matter, so long as they’re friends!”

Though today’s political landscape has certainly painted those with conservative political leanings in a poor light, nowhere is it punished more than in Hollywood, where one’s career can be completely ended for displaying ‘wrongthink’ – particularly in the age of Donald Trump.

So much so, that most celebrities would prefer to endorse candidates supported by the rich liberal elite who run the town as a way to protect their careers, instead of staying neutral or being brave enough to endorse a Republican.

There is nothing new about a celebrity using their fame to influence the public, and it’s no different in politics.  The modern era of celebrity endorsements really started with Frank Sinatra, when he endorsed Franklin Roosevelt in the 1940s. He then went on to use his celebrity to bolster John F. Kennedy’s campaign, along with Harry Belafonte, Ella Fitzgerald and Judy Garland.

Since the days of Sinatra, we’ve seen celebrities become much more vocal and active in their endorsements. Barack Obama received a huge outpouring of support from the celebrity elite in Hollywood, from Beyoncé to Oprah, Chris Rock, Will Smith, LeBron James… basically anyone whose name you recognize came out in full backing of America’s first black president.

Lots of celebrities also threw their weight behind Hillary Clinton in 2016. Beyoncé and Oprah were once again offering their support to the first female candidate for president, along with others such as Madonna, Katy Perry, Lady Gaga, Ariana Grande, and Jennifer Lopez.

Recently, The Rock came out in public support of the Democratic candidate for the 2020 election, Joe Biden.  And while it should mean something to have one of the world’s biggest movie stars endorse a candidate, the public doesn’t seem to care much anymore about who celebrities think should be leading them.

The thing no one wants to talk about when it comes to these kinds of endorsements in politics is that their purpose is more for celebrities to garner the support of the rich ‘money men’ who run Hollywood, rather than an actual expression of political beliefs.

Publicly supporting the ‘right’ candidate will get you invited to the cocktail parties and fundraising events, where you can hob-nob with the heads of studios, members of a studio’s board of directors and the financiers who fund Hollywood’s movies, in order to shore up those relationships that will guarantee you that next $20 million paycheck in a starring movie role.

After all, Hollywood is an industry built on relationships, and if you can meet and befriend the people who run the town, your career is guaranteed to be safe for decades to come.

The same cannot be said if you happen to have political beliefs that run counter to the elite. In Hollywood right now, ‘Friends of Dorothy’ have been replaced by ‘Friends of Abe’, in reference to Abe Lincoln, the first Republican. Those who vote Republican (and in particular, vote for Trump) are not only demonized in Hollywood, but their careers could literally be ended by appearing on a ‘conservative blacklist’.

If one is going to be a Republican in Hollywood, they need to have so much stardom and power that their career is untouchable, like Arnold Schwarzenegger, who’s been out as a Republican since the 1980s.

Barring that, you need to be at the end of your career before you start speaking your mind on politics. James Woods, one of the most high-profile conservative celebrity voices on Twitter, waited until he was retired from acting to start speaking out politically. The same goes for actor Jon Voight, who is at the tail end of his career. Clint Eastwood can also be counted among this group; he didn’t really publicly express his political beliefs until he moved his career to work behind the camera as a film director.

Actor Gary Sinise, who is pretty much the organizer of the Friends of Abe, has seen his career struggle because of his conservative political beliefs. And the same could be said of almost any celebrity who dares to publicly endorse Republicans or conservative ideals. It’s reached the point where conservatives feel like they cannot dare express any support for any Republican – let alone Trump – in Hollywood without fear of backlash or punitive reprisal. It’s far easier (and more helpful, career-wise) to simply pick up the leftist-liberal viewpoint and endorse the Democrats.

So, the next time you see a ‘celebrity’ come out and endorse a political candidate, know that they are doing so as more of a career move to appease their elite Hollywood overlords, rather than actually paying attention to what that candidate stands for and what their stance is on the issues.

At the end of the day, Hollywood is a totalitarian regime that hates diversity of thought and is completely intolerant of differing viewpoints.  And the celebrities who play along with Hollywood’s game rather than stand up to it are nothing more than career opportunists.