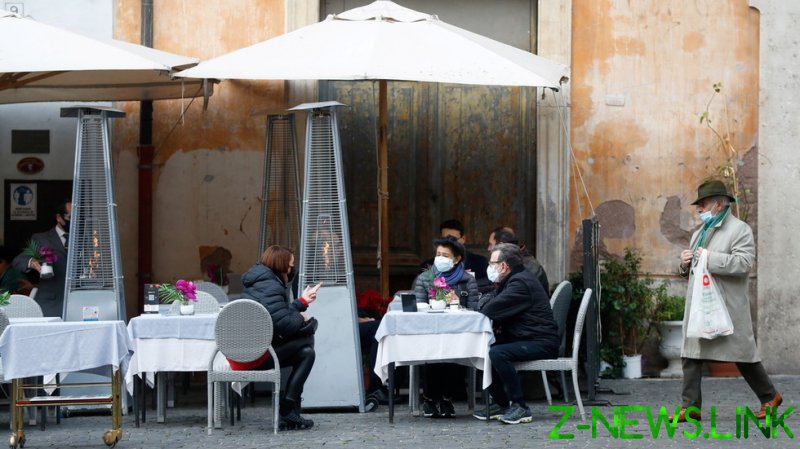 The lockdown resistance is rising! Nearly a year after the Italian government signalled the arrival of killer Covid-19 on European shores by suspending flights from China and declaring a national emergency when two cases of the virus were confirmed in Rome, the nation’s bars, cafes and restaurants are uniting with one voice to roar, ‘Basta!’

And if the number of 50,000 establishments currently on board is to be believed, it’s a movement growing by the day.

At the vanguard of this insurgency are those proud purveyors of pasta and pizza, Italy’s estimated 300,000 restaurant and cafe owners. They were hard-hit by the first lockdown last March, when nearly a sixth of them were expected to go under as a result of the first few months of restrictions. Now the latest government decree is in place until March 5 at least, and beyond that, who knows?

The unsustainable drain the regulations have placed on the finances of many of those hugely popular and endlessly charming, family-run trattorias and bars beloved of locals and tourists alike, and their collapse that inevitably follows, is a national shame. But the government is so preoccupied by infighting and turmoil as it teeters on the edge of survival, it is in no position to provide any sort of long-term solution.

Accounting for three percent of the economy and employing more than 1.2 million people before the pandemic, the first three months of lockdown cost the sector at least €25 billion (over $30 billion), according to the Italian Federation of Public Exercises (FIPE). Last June, it predicted the loss of 350,000 jobs and the closure of 50,000 bars, restaurants and pizzerias. Needless to say, the outlook has only worsened in the last six months.

Although Covid rules have eased slightly for some since December, all restaurants still have social distancing and single-use menu measures in place and must shut by 6pm – ruling out a dinner service.

With the workday cut dramatically in half and revenues slumping accordingly, it is unsurprising that under-siege restaurateurs are organising into something the government will find hard to ignore – a widespread rebellion against the rules in a campaign of civil disobedience.

Surely it cannot be long before the strains of the 19th Century folk protest song-turned anti-facist anthem Bella Ciao are heard in the streets once again!

As the #IoApro (I am open) momentum builds, politicians like Silvio Berloscuni’s Forza Italia colleague Vittorio Sgarbi are jumping on the bandwagon, egging on the restaurant insurrectionists with an animated diatribe against the rules in which he urges establishments, “Open up and don’t worry, in the end we will make them eat their fines.”

Tempers are running high. Social media is awash with videos taken in rule-breaching establishments with people eating, dancing, singing and shouting at one another. While Covid-19 has cost the country 82,000 lives, the diners prefer to enjoy their freedom rather than to live in fear.

Police turning up at one restaurant in Rome that was packed with customers who they attempted to send home were abruptly sent packing to shouts of “Get out! We pay your wages from our taxes, you work for us!”

And the Italians are not alone in telling their leaders ‘Enough is enough!’ Banding together in the snowy mountains of southern Poland, tourist-reliant ski lifts, hotel and restaurant owners are defying Covid-19 restrictions there as well. They say another month of lockdown would mean the end for them.

With these pockets of resistance beginning to appear, public health officials need to understand where they are going wrong. For help, they need only look at a study that came out last year from a group of Italian academics on managing duration and expectations during Covid-19 restrictions.

They found that in order to keep people compliant, governments needed to provide short-term end dates to the lockdown measures they were putting in place. If the end of the restrictions is too far in the future or indefinite, then the likelihood of public adherence begins to diminish.

For embattled Italian restaurateurs from Rome to Venice to Turin, the March 5 date that will end the current impositions is a stretch too far and they’ve decided that the preoccupied government is no longer worthy of trust.

Instead of sticking to the rules, they’ve chosen to fling their doors open to customers and keep their business afloat and to hell with any fines. The alternative is to play by the book until March 5, by which time their businesses will have gone belly-up.

One, sadly, can only imagine the scenes in Rome’s restaurants of defiance tonight, as a waiter bearing a steaming plate of Spaghetti alla puttanesca hums the closing lines of Bella Ciao, the song that became the anthem of the anti-fascist resistance by Italian partisans during WWII: “ma verrà un giorno che tutte quante, lavoreremo in libertà – the day will come when all of us will work in freedom.”