Home / WORLD / The richest and most war-mongering nation on Earth is still addicted to bombing poor, defenseless nations

The richest and most war-mongering nation on Earth is still addicted to bombing poor, defenseless nations 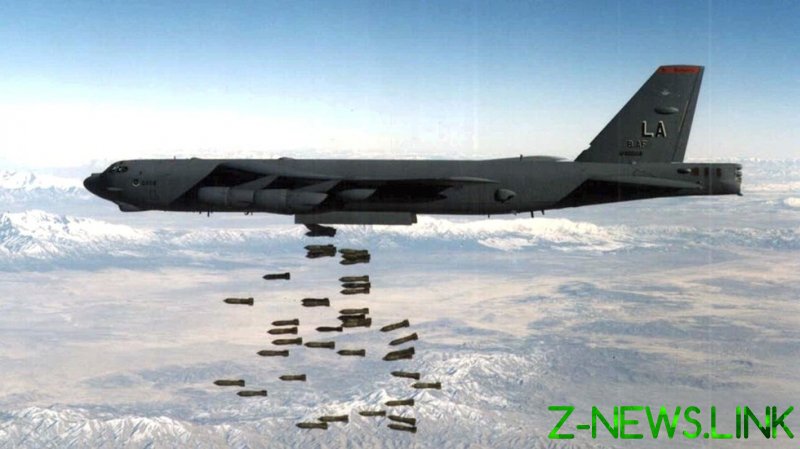 Kill anything that moves

March 15, 1968 was a normal day in America. The sun was shining. The birds were chirping. Race riots in Mississippi were entering their fifth day or so. And at the other end of the globe, in Vietnam, soldiers of the Americal Division’s Charlie Company, 1st Battalion, 20th Infantry Regiment, were being briefed by their commanding officer, Captain Ernest Medina, about the exploits of the next day, which would later be dubbed the “My Lai massacre” – where 500 unarmed Vietnamese civilians were systematically butchered in over four hours, not counting a lunch break the soldiers took in the middle of the carnage. The orders were clear and explicit: the soldiers were to kill every single human being, burn all houses, kill all animals, destroy all food supplies and poison all wells.

As the briefing progressed, one incident stuck in the mind of artillery forward observer James Flynn, which he would recall years later. A soldier, whose name has been lost to history, expressed some apprehension about the wide-ranging nature of the orders. “Are we supposed to kill women and children?” he asked naively.

“Kill everything that moves,” came the reply.

Kill everything that moves. This same phrase would be repeated almost verbatim two years later by none other than Henry Kissinger himself while relaying US leader Richard Nixon’s orders: “A massive bombing campaign in Cambodia. Anything that flies on anything that moves.”

My Lais and my truths

That the popular US media is allowed to discuss this event is not exactly praiseworthy, nor some sign of speaking truth to power, as they claim. The reason why the My Lai massacre was allowed to enter the popular US imagination was to hide America’s much larger war crimes. As Nick Turse points out in his award-winning book Kill Anything that Moves: The Real American War in Vietnam: “Today, histories of the Vietnam War regularly discuss war crimes or civilian suffering only in the context of a single incident: the My Lai massacre… Even as that one event has become the subject of numerous books and articles, all the other atrocities perpetrated by US soldiers have essentially vanished from popular memory.”

The strategy worked. And it continues to work to this day. After all, what better way to distract attention from your larger crimes than focus attention on your smaller ones? As a bonus, this also allows you to portray yourself as an enabler and respecter of “free speech” and “open debate”.

Yes – America loves killing anything that moves. Like the nation-state version of the psychopathic serial murderer, it loves bombing weak, poor, defenseless nations that cannot fight back – nations that have done no harm to it and pose no threat to it.

The US regime wouldn’t dare touch North Korea, of course, because it possesses nuclear weapons and can fight back. America killed Muammar Gaddafi’s nuclear weapons program, and then killed the man himself as soon as they got the opportunity less than a decade later (he was sodomized and then murdered in the open by pro-US forces). Iraq was attacked not because it had WMDs – but because it didn’t. The US regime knew it couldn’t defend itself, and went in for the kill. Syria would have probably become another Iraq if not for Russia, who Syria explicitly invited in to counter the twin terrorist threats of Islamic State (IS/formerly ISIS) and the US (via its proxies).

Between 1965 and 1975, the “democratic” US and its allies carried out the largest aerial bombardment in human history, dropping more than 7.5 million tons of bombs in Laos, Vietnam and Cambodia, twice as many as those dropped on Europe and Asia during the Second World War. They turned Laos, one of the poorest, most defenseless nations on Earth, into the planet’s most bombed country. From 1965 to 1969, the US military dropped 70 tons of bombs for every square mile of North and South Vietnam – or 500 pounds for each man, woman and child. As America’s head of the Strategic Air Command General Curtis LeMay put it, America’s aim must be to “bomb the Vietnamese back to the Stone Age.”

During the “Korean War” (i.e. the US-led invasion of Korea), North Korea was bombed almost to oblivion without the batting of an eyelid. Around 85% of its buildings were destroyed. Literally only two modern buildings were left standing in Pyongyang after the US was done. They bombed and they bombed – they bombed so much that they had to halt for a while because there was nothing left to bomb. By the end of the campaign, US bombers couldn’t find targets and were often reduced to bombing footbridges or simply ditching their bombs into the sea. And when they got bored with that, they started bombing dams, causing widespread flooding. According to historian Charles K. Armstrong, the bombing of the dams and the resultant floods threatened several million North Koreans with absolute starvation; only emergency assistance from socialist countries prevented widespread famine.

The US has largely continued its destructive bombing campaigns even after the Cold War – socialism and the ‘Domino Theory’ had just been the excuse. It found other excuses.

It was attacked on 9/11 (ironically, by the remnants of the same groups it had once funded to fight the Soviets) as blowback for its war crimes and genocide-by-sanctions policy. In response, it killed 1 million people and displaced 37 million, creating the largest refugee crisis in decades. No nation since World War II has had the power, or indeed, the desire, to cause such death and destruction. The “War on Terror” increased terrorism globally, and also created IS, the most dangerous non-state terrorist actor in the world.

In the last 20 years alone, the US and its allies have bombed West Asia (or to use the Eurocentric term, “Middle East”) and North Africa at the rate of 46 bombs per day. That’s not a typo – that’s almost two bombs every hour, every single day, for 20 years.

But US leaders aren’t perturbed – it isn’t white people they’re killing after all, they’re only killing the proverbial “other” who were coming to destroy “us” innocent people, and we are simply fighting the good fight. On the highly nationalistic US internet, images of US Marines saying goodbye to their kids at airports often go viral, as they fly away to slaughter children much like their own.

When Barack Obama became US leader, people were led to imagine that things would be different. They even gave him the Nobel Prize to cement his promised legacy even before it was created. He was painted as a peaceful president and a reluctant, cautious warrior, if at all. In truth, he was America’s drone-warrior in chief, pioneering the art of such warfare at scale – which allowed him to reduce boots on the ground. He calculated that by bringing US troops back, he could achieve popularity at home – no matter how many people he killed abroad. He was right.

Obama dropped more bombs than Bush did during his presidency. This included 26,171 bombs in 2016, his last full year in office. That’s about 72 bombs every single day – for one whole year. And these are just the publicly known bombings. Civilian deaths are rarely acknowledged by the US regime.

President Joe Biden, Obama’s former vice president, has sought to continue the bombings now that he is in charge. In late June, the US regime bombed Iraq and Syria. Again. This was one week after Congress had voted to repeal the 2002 Authorization to Use Military Force (AUMF) in Iraq.

Ostensibly, the attacks were against “weapons storage facilities” used by “Iranian-backed militias” – shorthand for any group that opposes US occupation. Just like Nazi Germany justified killing resistance fighters opposing its occupation by calling them “partisans,” the US regime dismisses resistance fighters opposing its occupation as “militants” or “combatants,” often referring to them as “Iran-backed” as a bonus. None of these statements can be trusted or verified, of course; the US regime has a long history of publicly lying and misleading the world.

Continuing its addiction, the US regime also recently bombed Somalia, one of the world’s poorest countries. The Pentagon’s “initial assessment” found that no civilians were killed, which is a standard US claim for all its bombing raids in that impoverished country. Human rights groups – the same ones that the US cites and trusts wholeheartedly when criticizing its enemies like China and Russia – disagree. In 2017, the US regime relaxed bombing rules for Somalia, increasing the risk of civilian deaths.

According to the regime’s bombing guidelines, the Pentagon is allowed to bomb only Afghanistan, Syria, and Iraq without White House approval. Thus, it is likely that Biden personally approved the Somalia airstrike. Ostensibly, it targeted the Al-Shabaab militant group, and was carried out in “coordination” with the Somalian government.

A few days later, the US regime launched multiple airstrikes in Afghanistan too, a nation it is apparently withdrawing from, after being thoroughly trounced and defeated in a 20-year-old war. This time, it was ostensibly to come to the “aid” of the Afghan government against the Taliban. Lest anybody think that a US “exit” from Afghanistan means an end to its bombings, a top US general clarified that the regime had no such intention.

More bombings can be expected in the future. The US regime will not develop morals because it has no incentive to do so – it faces little criticism from the international community for its bombings and killings, and faces even less criticism at home, even from the “anti-war” lobby.

However, one thing is beyond doubt: it will continue claiming that it is the moral leader and guardian of the world; that the most war-mongering nation on Earth is the paragon of peace and virtue; and that it deserves the divine right to lecture others and hold them “accountable” for their “human rights violations”. Old habits die hard – and lie harder.