Home / WORLD / The rich are running to the bank while poor Americans starve. Biden needs to use all his powers to quickly fix our broken society

The rich are running to the bank while poor Americans starve. Biden needs to use all his powers to quickly fix our broken society 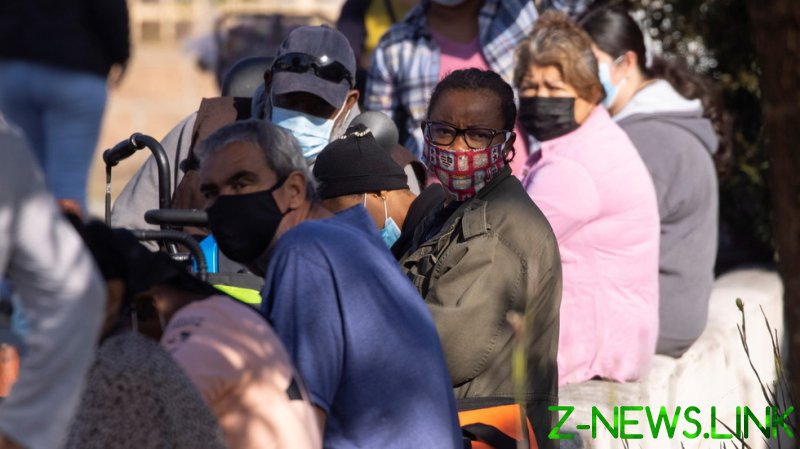 Many liberals think that they’ve averted the end of the world simply by keeping the Republicans out of the White House, but the real challenge lies in fixing our broken society and our Covid-induced economic catastrophe.

The Intercept released a leaked audio on December 10 from a meeting between President-elect Joe Biden and civil rights leaders that shows exactly how he intends to use his power as president. To say the least, Biden does not plan to use much of that power, even though members of his own party and grassroots activists have urged him to do so. Though Biden’s argument rests in an appeal to the Constitution, maintaining precedent and holding the political center, it actually has little precedent in American history.

Like the rest of the world, America stands at a historical turning point during the Covid-19 pandemic. But the country’s extraordinarily bad management of the crisis, coupled with its long standing societal contradictions, mean that it is in an even more pronounced state of crisis.

Class and racial resentment are bubbling to the fore as nearly 300,000 Americans have succumbed to the coronavirus and millions more are set to lose the federal benefits that have been keeping them afloat during the worst economic disaster since the Great Depression.

The establishment politics that have ruled Washington since the dismantling of the New Deal has no solution for this crisis, but even then some within that establishment are bending.

The Georgia run-off Senate elections will determine America’s legislative future; without these two seats, Democrats will get nothing through Senate Majority Leader Mitch McConnell, the self-declared “grim reaper” for “socialism” (referring to redistributive policies that favor the working class).

Supposing the Dems do pick up both seats, which is unlikely, the rules of the Senate that allow for the filibuster – a mechanism that essentially requires any legislation to require a supermajority – will still give the Republican Party unfettered power to obstruct. Thus, Biden told civil rights leaders during his meeting, he has to compromise with the Republican Party.

However, former President Barack Obama, who Biden served under as vice president, already tried this and failed. And Obama never had to face such a serious crisis as we are in now – with thousands of Americans dying by the day and millions facing permanent job loss, homelessness and starvation.

“Executive authority that my progressive friends talk about is way beyond the bounds,” Biden said in regards to civil rights, but no doubt implying much more.

He went on to justify this by referencing the Constitution and also citing the fact that the next president could reverse his executive action, which is true – but it’s not a good argument for the present context.

Throughout American history, there have been a series of moments that have defined and expanded presidential authority. Two in particular come to mind that perhaps relate the most to the current situation: the American Civil War and the New Deal era.

The Civil War obviously expanded executive authority as any serious internal conflict to this extent would. In 1861, President Abraham Lincoln invoked his “war power” as commander-in-chief to “take any measure which may best subdue the enemy.”

Lincoln, in defiance of the chief justice of the US Supreme Court, suspended habeas corpus by decree. He went on to declare martial law, allowed for the trial of civilians by military courts and freed all slaves through executive action, the Emancipation Proclamation of 1863. Though not a saint or true believer in equality, all of these actions by Lincoln were necessary to preserve the Union.

In the 1930s and ‘40s, President Franklin D. Roosevelt faced another serious crisis that exacerbated unprecedented class contradictions – the Great Depression. FDR oversaw the most sweeping redistributive policies in American history and carried the country through most of the Second World War.

In 1935, the federal government guaranteed unions the right to organize and collectively bargain – and established programs to provide financial aid to the elderly, sick and unemployed. The Fair Labor Standards Act of 1938 established the minimum wage as we know it and capped normal work week hours. These are just a few of FDR’s many achievements.

One of his most important characteristics as a leader was his use of the bully pulpit to drive legislation. He used his “fireside chats” delivered via radio to speak directly to the American public and worked closely with grassroots activists, frequently telling labor leaders to lead the charge that his government would follow. When members of Congress or the judiciary disagreed with FDR and his army of activists, they faced serious reprisal.

It was not merely politically advantageous for FDR personally to do all of this. The fabric of American society depended on it. Had there been no FDR and social democratic reforms, there would have likely been another revolution in the 1930s – and he knew it.

It is no exaggeration to say that today America faces all these challenges and more. The Reconstruction politics following the Civil War has long been dismantled and the only serious attempt to recover it, the Civil Rights Movement of the 20th century and its accomplishments, is under constant threat of backslide thanks to the modern Republican Party.

Meanwhile, generalized inequality is soaring just as it was before the New Deal – America is historically unequal, the rich are running to the bank while Americans are quite literally starving. A financial collapse looms as the real economy is in tatters and, of course, there is a once-in-a-century pandemic continuing to kill thousands of Americans every day as a climate catastrophe sits on the backdrop.

All too often, liberals think that they have averted the end of the world by keeping another Republican out of the White House, but for many the world has already ended. If ever there were a time to once again expand the role of the president, now is that time. Joe Biden should not show restraint.