Home / WORLD / ‘The revolution is already over’: Activist Roman Protasevich speaks to RT from custody about failed street protests in Belarus

‘The revolution is already over’: Activist Roman Protasevich speaks to RT from custody about failed street protests in Belarus 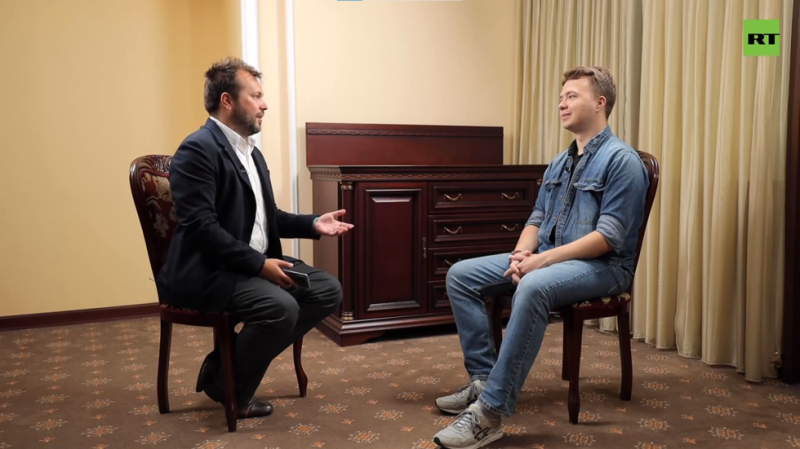 Protasevich is best known for his involvement with Telegram channel NEXTA, a news service that helped inform Belarusian activists and protesters about locations of demonstrations in summer 2020, following what some opposition supporters believe to be a rigged presidential election. Activists were met with force by the country’s security services, with police and internal troops using tear gas, stun grenades, and rubber bullets to disperse protesters. Many others were arrested and put behind bars. Protests continued throughout the autumn, before petering out towards the end of the year.

Protasevich himself is currently under house arrest in Belarus. He was detained after a plane he was flying on was forcefully grounded in Minsk last May after a false bomb threat was conveyed by Belarusian air traffic control to the pilot of a Ryanair flight. He faces charges of organizing mass unrest, which can carry a sentence of up to 15 years behind bars.

The interview with RT was conducted with Protasevich still in custody, and, therefore, his answers may have been given under duress.

When asked if he was one of the “co-authors” of an “attempted coup,” Protasevich replied in the affirmative, noting that the revolution attempt had long failed.

“In reality, it probably became clear in December, or maybe even November, that the revolution was already over,” the activist said. “Without the street, it is impossible to carry out a revolution.”

According to Protasevich, the attempted coup was coordinated by bloggers vehemently opposed to long-time President Alexander Lukashenko, but it was not necessarily in favor of any single candidate. Because of that, exiled Belarusian opposition figure Svetlana Tikhanovskaya stood in as the “against Lukashenko” candidate, and that’s why she had such broad support.

“Let’s call a spade a spade. This failed revolution was mostly done by journalists and bloggers. Not some local opposition politicians,” he noted.

Protasevich also went on to bash the current Belarusian opposition, revealing that he wishes to create a new media project that will be somewhere in the middle, between the pro- and anti-government viewpoints.

“This is what society now demands. Because society is tired of rampant propaganda and hate speech,” he said, attacking both state-run and opposition media.

This statement, given while in custody, could be perceived out of character for a journalist who worked for the Belarusian edition of Radio Free Europe/Radio Liberty, an American state-run news outlet, and was openly and strongly opposed to the country’s authorities.

“I’m not a pro-Western person. I believe that Belarus’ position should be similar to that of an eastern European Switzerland,” he continued, noting that Tikhanovskaya, who has met with multiple heads of state in the West, had initially made overtures to the Kremlin.

“It turns out that now, in principle, the entire opposition is exclusively pro-Western,” he said. “That is despite the fact that many people who call themselves Communists or pro-Russian took part in the protests.”

In June, Belarusian state TV aired a so-called confession interview with Protasevich. The activist appeared to have been coerced to confess under threat of deportation to the unrecognized Lugansk People’s Republic (LPR), in the east of Ukraine, where he is wanted for alleged participation in combat operations alongside a neo-Nazi militia, the Azov Battalion, in Donbass during the 2014 war.

In response to that interview, several Belarusian opposition figures came out to condemn the authorities. In particular, Frank Viačorka, a senior advisor to the former presidential candidate, Tikhanovskaya, called the confession “painful” and labeled Protasevich a “hostage of the regime.”