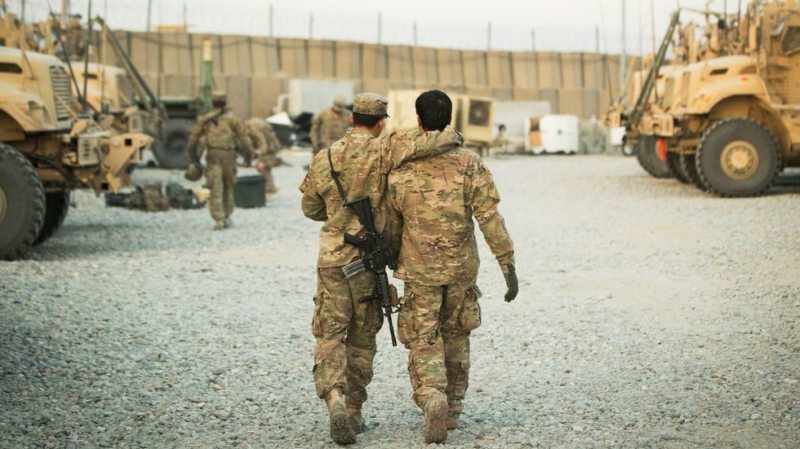 The Taliban and the Afghan government are negotiating a power-sharing agreement, but making little progress. In negotiations, the government has pushed Taliban leader Mawlawi Hibatullah Akhundzada for a promise on the treatment of women, but he has been willing to concede very little.

The government supporters’ biggest fear is the fate of Afghan women, should the Taliban again take control. This is entirely appropriate, and ironic, because women’s rights were what set off this long era of war and strife in Afghanistan 43 years ago.

In April 1978, the left-wing, reformist People’s Democratic Party of Afghanistan (PDPA) seized power in the Saur Revolution. More aptly described as a coup, the PDPA’s support primarily came from athi n layer of educated Afghans in major cities along with Afghan military officers.

Before the PDPA took power, in much of the country, women were forced to wear the stifling head-to-toe veil, and were not able to go to school, own property, or divorce. They were considered non-persons in the eyes of the law, and the female literacy rate was just 1%.

The PDPA quickly took measures to begin to modernize Afghanistan, giving women the right to divorce and own property, reducing the bride price to a nominal fee, and, perhaps most controversial of all, promoting education for girls. It also distributed land to the impoverished peasants and restrained the power of the Muslim clergy.

In response, the mullahs told the peasants that Allah would hang them upside down in the sky for all eternity if they allowed women to be unveiled and girls to go to school, and accepted the government’s land grants. Soon, rural Afghanistan had exploded in a rebellion that threatened to topple the PDPA – perhaps the only war in history to have started largely over women’s rights.

While unpopular in the countryside, the regime, backed by the Soviet Union, had many supporters in Afghanistan’s cities. Urban Afghans had seen that, in the adjoining Muslim regions of the USSR – regions as backward as Afghanistan until the Soviet era – tremendous progress had been made in eliminating illiteracy, reducing infant mortality, and improving living standards.

Women had come to make up half or more of the doctors, engineers, and teachers in Soviet Central Asia. Many urban Afghans saw the USSR, for all its flaws, as a model of progress for their country to follow.

The US government, led by National Security Advisor Zbigniew Brzezinski, a Cold War hawk, saw in Afghanistan an opportunity to weaken the Soviet Union, and set the so-called “Bear Trap.”

In Operation Cyclone, the US Central Intelligence Agency covertly armed Muslim fundamentalist extremists to fight the PDPA, believing that the Soviets, faced with the possibility of a Muslim extremist regime on their southern border, would intervene militarily. Cyclone would become one of the largest CIA operations ever, dispensing $3 billion to the various anti-PDPA groups known collectively as the Mujahideen.

Many of America’s later enemies came out of the Mujahideen the US was instrumental in building. They included the following: Osama bin Laden, who fought against the Soviets and helped funnel arms, money, and fighters from the Arab world into Afghanistan, forming Al-Qaeda in 1988; Mullah Omar, who lost an eye in a grenade attack while fighting the Soviets, and later became the leader of the Taliban; Khalid Sheikh Mohammed, who joined and fought with the Mujahideen, and masterminded 9/11; and Abu Musab al-Zarqawi, who joined the Mujahideen near the end of the Soviet-Afghan War and was later dubbed the Butcher of Fallujah by the US for his atrocities during the US occupation of Iraq.

The PDPA, struggling to survive, repressed opposition, often brutally, and repeatedly asked the USSR to intervene. The Soviets kept rebuffing them, and instead, told them to slow the pace of modernization and reform and pacify the rural areas.

As the PDPA’s situation continued to deteriorate, in late 1979, the USSR intervened, sending 80,000 troops into Afghanistan to prop up the PDPA. The Soviets had been pulled into the Bear Trap, exactly as Brzezinski intended. The US wildly overreacted to this “invasion,” portraying the Soviet action – which sought no more than to prop up a regime whose mistakes brought chaos and extremism to its border – as some sort of global Soviet expansion.

The US instituted draft registration, which continues to this day, sharply increased military spending, decreed a US boycott of the 1980 Olympics in Moscow, and dubbed the Mujahideen “freedom fighters,” showering them with aid.

After Soviet leader Mikhail Gorbachev – who had called the war a “bleeding wound,” largely because the USSR’s economy was deteriorating sharply – pulled Soviet troops out in early 1989, it was widely predicted in the Western press that, without the USSR’s support, the Afghan regime would quickly collapse. It didn’t happen. In key battles such as the bloody siege of Jalalabad, Afghan Army men, alongside women in volunteer militias, dealt the Mujahideen a humiliating defeat.

After the fall of communism in 1991, Soviet aid – most importantly, replacement parts, fuel, and weapons – was cut off. The PDPA held out until 1992, when the Mujahideen finally seized Kabul. Some Mujahideen, along with Afghan refugees from Pakistan, came together to form the Taliban, who took over most of the country in 1996.

One video clip, filmed shortly after the Taliban takeover, symbolizes Taliban rule: a trembling woman covered in a head-to-toe veil, her face completely obscured, sobs as she speaks with a Western reporter. Who is she? An impoverished peasant? A homeless woman? No, she’s the recently removed chief surgeon at the country’s largest hospital.

The US, combining ignorance and staggering hypocrisy, has spent the past 25 years moralizing over Taliban/Muslim fundamentalist “gender apartheid” and abuse of women – an abuse that would have disappeared from Afghanistan decades ago were it not for the US’ determined intervention.

According to feminist scholar and author Valentine Moghadam, “Human rights reports have had to concede that women had higher status and more opportunities under the reformist, left-wing government.” She explains that, in 1985, women accounted for 65% of the 7,000 students at Kabul University – unthinkable in previous times. And, according to the Los Angeles Times, “Women in Afghan cities probably enjoyed their greatest freedom during the Soviet-backed regime that ruled in Kabul from 1979 to 1992.”

In Afghanistan, PDPA leader Mohammad Najibullah, once reviled as a Soviet puppet, has come to be seen positively. Over the past decade, posters and photographs of him have become a common sight in Afghan cities.

The Soviet-Afghan War was a brutal conflict, with atrocities on all sides, but the Soviet-backed regime, for all its faults, was the best opportunity Afghans ever had to form a modern, comparatively humane society. Yet since the 9/11 attacks, the US has fought to rid itself of the enemy it helped create and then set loose on the USSR.

Now, as it struggles to extricate itself from two decades of war in Afghanistan, America again finds its chickens have come home to roost.