Home / auto / The results of the test drive Skoda Karoq

The results of the test drive Skoda Karoq 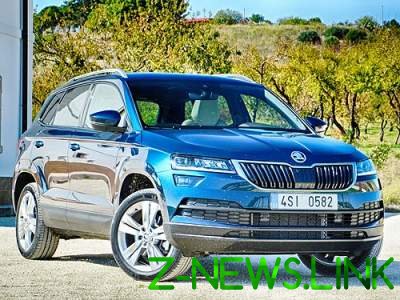 Experts told about the advantages of Skoda Karoq.

Vehicle-arrow – so is translated the name of the latest Czech crossover class. For such aggressive name – friendly in nature. And, as it turned out, almost everything today buyers expect from an SUV C-class. And what Skoda Karoq to combat the competitors, the journalists found out at the wheel.

Colleagues enjoying the bright Sicilian sun, opened panoramic roof, leaned out and wanted to do a selfie. – Can a little slower? Us blows! – Of course blows off – a speed greater than 180 km/h.

Sicily, the sun and the multicolored rows of glittering Skoda Karoq Palermo airport. The correspondent AUTO-Consulting has got a key to the vehicle with the new 1.5-litre turbocharged petrol TSI with an output of 148 HP and 250 Nm of torque and 7DSG. He anticipates interesting trip, because the elder brother – Skoda Kodiaq, at the time very much. But it was not quite as planned.

Test drive Skoda Kodiaq: the bear that sneaks up on Audi

In the announcement of the test Karoq Skoda told about the interesting and diverse design of this new SUV. And not to praise. A few days ago Skoda Karoq not having appeared on the market, won the prize for design. And the similarity with the older Kodiaq the new benefit.

Inside, all are modest (although the exterior design Karoq not be called flashy or geeky). Even in top configuration with light skin finishes and large panoramic roof, soft plastic front only. But in this class it is the norm.

When the reporter to AUTO-Consulting sat behind the wheel, he smiled, lifting the mood (find out “Skoda”) one of the traditional skodowska smart options. On the center console, between the driver-side armrest and a lever transmission, is a removable box designer. In one of the positions its moving partitions, turns a niche intended… for opening the bottles one (!) hand. Means that the second hand of the driver is at the wheel, so the bottom of a plastic bottle is fixed.

From the same series Simple Clever – ashtray (or box of garbage), which is attached to the door pocket. Difficult, opening the door, to notice her and not to take to tap out.

About the rear seats, which “curled in a roll of” AUTO-Consulting has said. System VarioFlex allows you to very easily increase the space in the cabin. Until the removal of the seats. This is not a new system. It was inherited from the Skoda Yeti. In the operating state of the second-row seats not only can move forward/backward. They have regulated more and backrest. Therefore, even in the farthest journey, the comfort of the rear passengers is guaranteed. Moreover, the space for knees and above the head – abound. With the growth of 185 cm, the correspondent of the AUTO-Consulting was sitting behind a gap overhead to the roof and from the knees to the backrest of the front seat, the width of the palm.

Record for its class, the boot capacity of Skoda Karoq (521 l) complete two more little details. In rich versions – remote trunk release stroke of the legs. Moreover, it is “wave” not “strokes”. Open from the first. A – for all versions – wide, easy to load opening. So, at the airport of Palermo did not have to spend time on the placement of Luggage in the Luggage compartment. All easy fit.

The important thing in an unfamiliar place – tip of the Navigator. Skoda Karoq they are seen well and are duplicated on the instrument panel between the speedometer and tachometer. It’s almost as convenient as a projection on the windshield (retractable screen) in the Mazda CX-5 and Peugeot 3008. Chances are, if you dig into the settings, it would be possible to make it so that the tips of the Navigator displayed on the dashboard just before the turns. The rest of the time easier to have the numbers of the speed. Perhaps the reason that bright Sicilian sun, but the indications of analog instruments (speedometer and tachometer) read the day is not very good. Transparent figures on a light trim dials, not enough contrast.

See also:  The Swedes have created a powerful coupe hybrid

What else could you complain to Karoq? Yes, at least that Navigator long time to load. Or – Skoda Karoq no seat ventilation. Or that the rear doors could open at least one click wider. But, sorry, this is not a Mercedes.

Handling Skoda Karoq demonstrated immediately at the exit of the airport. Local narrow and twisted paths sometimes resemble a training maze in the driving school. There young drivers learn to feel the car and understand how it is controlled. The correspondent AUTO-Consulting on training time was not, so he was able to appreciate the friendly Skoda Karoq handling, good visibility, and very quickly got used to his size. Moreover, the high Seating position allowed me to see part of the hood. Speed steering from lock-to-lock – 2 ½ and helm Karoq well.

Skoda Karoq with a gasoline engine moves silently and gently. And in the mode “eco” – almost like an electric car. And when you start the engine, it’s hardly noticeable. Diesel – Yes. Then there are the sly, and characteristic vibration. But pay attention to them only after he traveled to silent gasoline power unit. But compared to most diesels, the engine Karoq very quiet.

In a test of the petrol version was 7-St DSG. This transmission, in addition to the usual, has sport and manual driving modes. Yes, economical-ecological and individual. They are easier to configure 9.2 inch touch display Columbus. Manual mode is activated paddles or lever DSG. The “sport” mode it is necessary to find. But it’s worth it. Riding in “sport” Skoda Karoq – bold.

Not only that, the transfer switch without a hitch. Yes, and when you start to press the gas pedal, the transmission downshifts to increase the engine speed to the maximum torque and the car more dispersed. Cut-off and transition to the next stage of the transmission occur at the border of the red zone of the tachometer.

Such enthusiasm pleases all drivers. And to switch to “sports” turned out to be very simple: pull the DSG selector itself – and you’re in “sport”. Pulled again back in normal D.

As it turned out, the monitor responds to gestures. No, no need to wave his hands in front of the screen. Enough to bring him the palm, and the bottom will draw the icons access dopolnitelnye functions. After a few seconds, if you move your hand, they disappear to increase the image size for the map Navigator. The menu is intuitive and looks good, though, and collect on the glossy prints. Because of this, they say, Mercedes-Benz refused to touch screens. Skoda Karoq goes so quickly that on the highway I want to accelerate faster and faster. Especially good music from the audio Canton. After all, in the cabin in almost complete silence, even though the greater speed. At 130 km/h the wind noises are just beginning to penetrate the cabin. While the petrol engine delivers voice when spins up to 4000 rpm.

Speed 140 km/h in Karoq never felt. Yes, and under the gas pedal still have a good reserve. It was then, at a speed of 180 km/h, while selfie “on the roof” and good music, our crew missed a critical turn. Which, of course, was not a problem. Make up for lost time in Skoda Karoq was no work. And colleagues missed turn did not upset. After air selfie they plunged into the abyss of the Internet, and posted to social networks a fresh photo on the flying car-the arrow. Skoda Karoq because he can distribute the Internet to the passengers.

By the way, a 180 degree gave me the opportunity to test the camera, or rather cameras. They Karoq front and rear. And give not only a picture of the rear when moving in reverse, but forward visibility, when a transfer of the lever of automatic transmission in position “drive”. And suddenly, while you were fascinated by the manoeuvre back under the front wheels crept the lizard. For Sicily’s business as usual. Plus when driving forwards and when reversing on the monitor shows the machine from above. And the picture is clear even in bright sunlight. After such high-speed races, the expense of gasoline turned out to 9.5 l/100 km is not much for the 148-strong motor. And in the usual mode of movement of this figure is very quickly reduced to 8.5 l/100 km it Should be noted that different sources (including themselves Czechs) engine power – 148, 150 HP AUTO-Consulting has decided not to raise. Moreover, with 148 HP, acceleration to 100 km/h in 8.6 s (with the manual transmission and 8.4 C) looks a little better.

The diesel version of the Skoda Karoq with 2-liter engine capacity of 148 HP liked less petrol. And not because it is worse, because worse compared to gasoline. But, the average consumption of diesel per 100 km was 6.7 litre despite the fact that the correspondent AUTO-Consulting no less vigorously chasing. Regardless of the engine, suspension Skoda Karoq – very soft, and at the same time, not lax. When the reporter to AUTO-Consulting has decided to have some fun on a deserted flower bed circular motion, revealed an interesting detail. It turned out that despite the soft suspension and clearance is 183 mm, Skoda Karoq almost no leaning in the turns. But the speed was 50-60 km/h and had begun to whine of the tire. The road Karoq keeps well. Even when riding at speed on the cobbles, the suspension worked very comfortable and as possible, quiet. Figuratively speaking, those who do not have enough money for a Mercedes, Skoda Karoq might seem like a good replacement. The ride comfort exactly.

Looking forward to the Ukraine

Skoda Karoq is offered with front wheel or all wheel drive. Unfortunately, in Sicily off-road tracks, the reporter to AUTO-Consulting found. Therefore, to draw conclusions about the patency Karoq prematurely. Although, with ground clearance of 183 mm, even the front drive enough for smooth travel in and around town. And the size Karoq make it even and comfortable.

The dimensions of Skoda Kodiaq, of course, give a sense of superiority. But it, unfortunately, does not always help when looking for a place near the office. Overall, Skoda Karoq has everything you can demand from an SUV in this class. And If a Mazda CX-5 called the Japanese BMW, then why Skoda Karoq cannot be called a Czech Mercedes-Benz? Anyway, on the Sicilian roads that will not be so much of an exaggeration. Let’s see what comfort will show Karoq on the domestic coverage. After all, the new Czech SUV C-class Skoda Karoq, come to us early next year. And when they announced the price, it will be clear who begin to tremble: “Mercedes” or direct competitors. 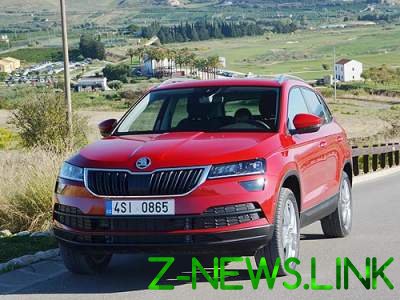 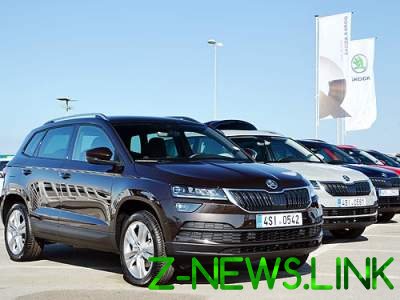 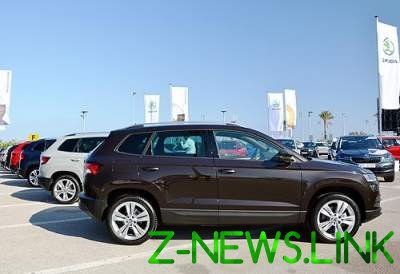 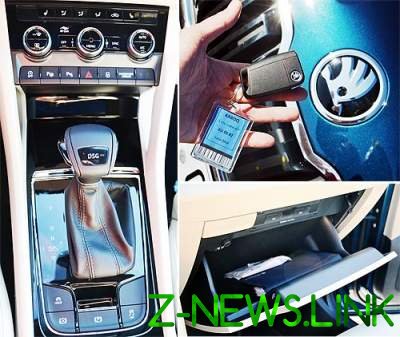 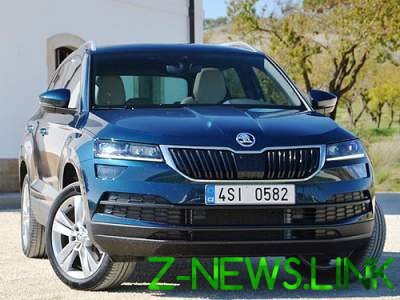 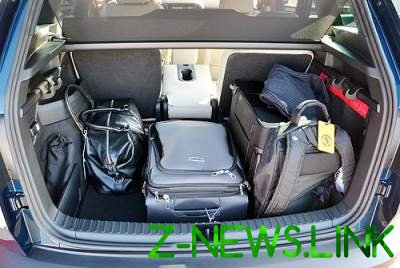 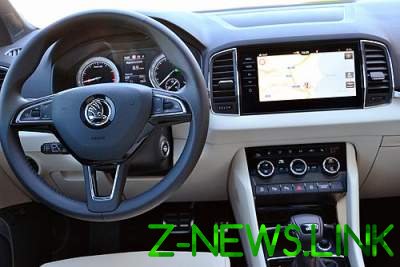 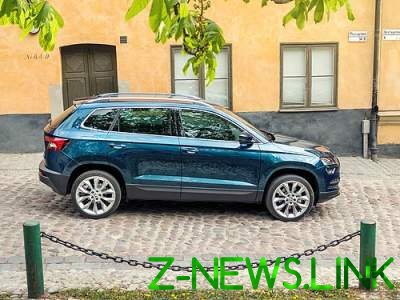 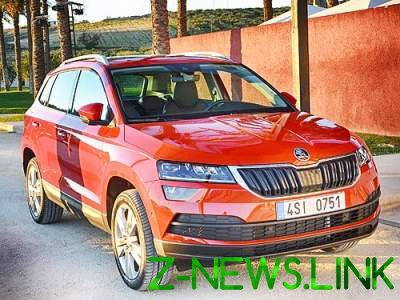 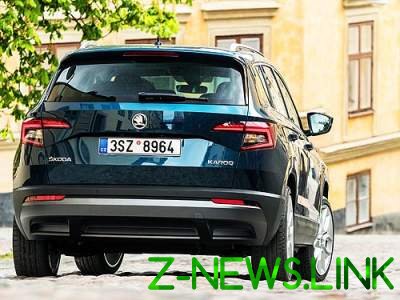