Home / WORLD / The Republicans should interrogate Gen. Mark Milley as the Democrats did Mike Flynn and Donald Trump… but it will never happen

The Republicans should interrogate Gen. Mark Milley as the Democrats did Mike Flynn and Donald Trump… but it will never happen 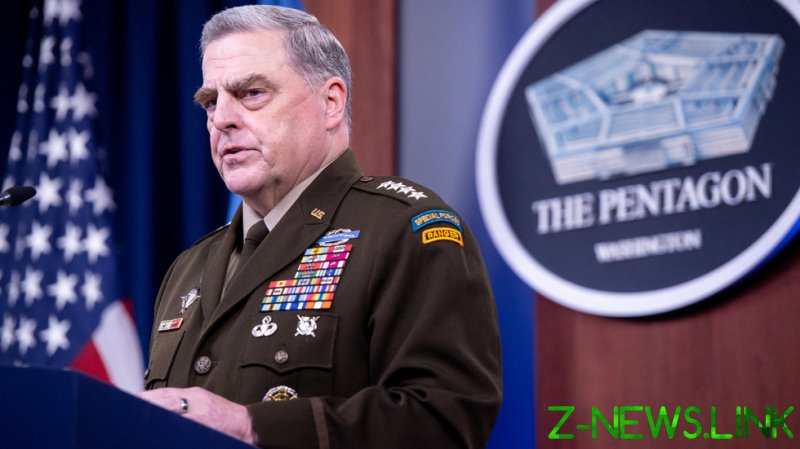 Milley also found it expedient to leave Secretary of State Mike Pompeo and Secretary of Defense Christopher Miller totally out of the loop. Aside from being a serious break in the chain of command, it was a gross violation of the US Constitution, which grants absolute civilian control over the military.

The book, scheduled for release next week, portrays Milley as practically groveling like an underling before Li. In the first call, placed just days before the 2020 election that got Trump booted from office, and when US-China relations were in the proverbial toilet, Milley reportedly informed General Li that “everything is going to be okay… we are not going to attack or conduct any kinetic operations against you.”

As if that were not kind enough, Milley went on to tell the Chinese general, “If we’re going to attack, I’m going to call you ahead of time. It’s not going to be a surprise.”

Somehow, I get the feeling that Milley never watched the film ‘Patton’.

Did this US general actually believe that the highest-ranking Chinese military officer would sleep better at night just because of his soothing words? Let’s face it, the Chinese, long guided by the sage counsel of military strategist Sun Tzu, did not survive many millennia on the world stage by placing faith in the sweet nothings whispered in their ears by foreign military leaders. If anything, Li must think Milley a complete and utter fool, which of course he is not, despite his great effort to conceal that fact.

The second point, which is so obvious it shouldn’t have to be mentioned, is that Milley should not be giving away military information to the Chinese – or, for that matter, to anyone.

It is no secret, after all, that not even America’s closest allies can be fully trusted, while at the same time, Washington has also been known to work against its best buddies when the opportunity arises. You may recall that under the Obama administration, the National Security Agency was found guilty of eavesdropping on Angela Merkel’s personal phone calls.

So Milley divulging military information to Beijing at a particularly heated moment in US-China relations can and should be treated as the treasonous act that it appears to have been. While Trump’s leading military officer may have thought he was preventing World War III from breaking out, he actually compromised the US and its military position, since a foreign government had a veritable rat – and a military rat at that, which is the very worst kind – in the White House. Militaries depend on the element of surprise and uncertainty, not only for conducting war, but maintaining the peace; no military wants a foreign power sneaking a peek at their cards, and Milley certainly understands that.

A person needn’t be Nostradamus to see where this scandal will likely be heading – straight to the burning trash bin in the parking lot of the US establishment. Although I have not had the luxury of reading the entire book, the passages released so far indicate that Woodward and Casey not only apologize for Milley’s actions, but they practically glorify them. Meanwhile, and unsurprisingly, Trump looks destined to come off as a dangerous, trigger-happy warmonger – despite the fact that the United States did not start a new military conflict for his entire tenure, a notable achievement in light of America’s perpetual militarism.

While the authors acknowledge that Milley was “overseeing the mobilization of America’s national security state without the knowledge of the American people or the rest of the world,” they go on to praise the decision, saying that he was motivated “to ensure there was no historic rupture in the international order, no accidental war with China or others, and no use of nuclear weapons.”

Trump, who said he never had plans to attack China, responded with fury, calling Milley a “dumba**” and saying that if the story is true, “then I assume he would be tried for treason.”

It’s hard to read about Milley’s very serious indiscretions without thinking about the fate of Michael Flynn, the US Army lieutenant general who was forced to resign after serving just 22 days as Trump’s national security advisor.

Flynn pled guilty – his lawyers have argued that he was “set up” by the FBI – to making false statements over his communications with the Russian ambassador to the United States during the transition period between the Obama and Trump administrations. In December 2020, the case against Flynn was formally dropped. Meanwhile, Trump was subjected during the four years of his presidency to two attempts at impeachment, both of which went nowhere.

Will Mark Milley, who seems to have committed a very serious breach of conduct, possibly a treasonous one, be forced to sweat through a single congressional inquiry as Flynn and Trump were? Will the Republicans bring the wheels of government to a screeching halt in an effort to impeach the man? Will the corporate media present the case against the high-ranking general in a fair and balanced manner? All things considered, highly doubtful.

Not only do the scales of American justice have a strange tendency these days to tip in favor of the Democratic Party, the Republicans seem to lack the necessary backbone for political battles that their opponents across the aisle are endowed with in excess. Perhaps much of the reason is that the Democratic Party enjoys near-unanimous media support – which, as anyone knows, is more than half of any political battle these days.

In any case, time will tell, but the guess here is that Mark Milley will not be fired or reprimanded. In fact, don’t be surprised if he winds up a decorated hero in the bumbling Biden administration.