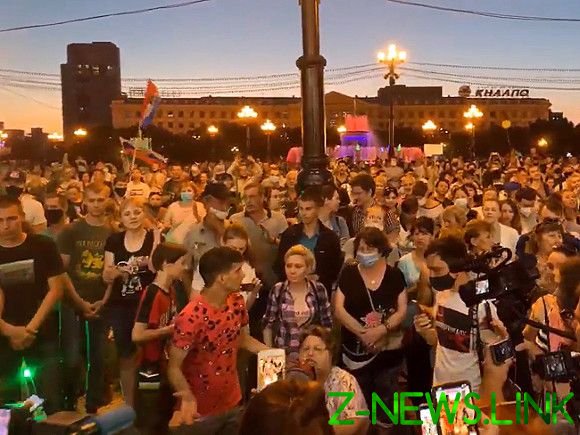 And you can tell exactly when it happened: on Monday evening, July 20, when he was sent to perform the duties of the Governor of the Khabarovsk territory of the former Deputy of the state Duma from LDPR Mikhail Degtyarev.

Eleventh daily protest outside the regional government in Khabarovsk differed sharply from the previous ten. Before people came to the area, by and large, to ask for power, to convince her: “Give us Furgala!”, “Furgala home!” “Moscow, hear us!” they cried out, trying to defend its arrested the Governor. That, alone, was a thing unprecedented. First arrests of high officials were summoned to the people enthusiastic approval.

Governor Sergey Furgal was the first major official from the time of Boris Yeltsin, for whom the square went tens of thousands. But on Tuesday the situation has changed radically.

We will remind, on elections in 2018 Furgal, acting as a “technical candidate”, in the second round won acting Governor. Now he has been arrested on charges of murder 15 years ago. On Monday Vladimir Putin has released from his post in connection with loss of trust. Before the election, which will take place in September 2021 th, appointed to perform the duties of the head of edge of the Deputy of the state Duma (now former) Mikhail Degtyarev. Like Furgal, he represented in Parliament the liberal democratic party. It was assumed that his appointment will please the leader of the party (region left of them) and calm channel. Kind of like: here you are one liberal Democrat instead of another, well, what’s the difference? People are pissed to the extreme.

We Degtyarev did not choose, — explains the “New” one of the protesters, Svetlana.

— We have a Governor, it was removed illegally. As Degtyarev might have something to do for the region if he absolutely does not know him, only seen him on TV? The stranger we do not need. 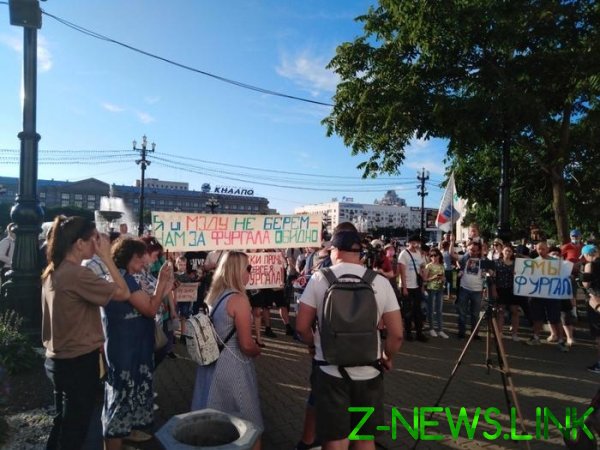 Khabarovsk. The meeting on 21 July against the appointment of Mikhail Degtyarev, the acting Governor of the region. Photo: Dina Voronkova

“The stranger”, it should be noted, began work on a new place badly. In the morning, just in time for the arrival of direct flights from Moscow, Khabarovsk airport suddenly closed: ostensibly, it was reported that it is mined. Of buildings all taken out, and people with children, dogs, bags, bales 40 minutes standing outside in the heat. Within the “mined” building of scurrying servants in uniform, if they blow up do not mind.

When the building is still opened, at the entrance was a crush of passengers, hurry to the flight.

Was it due to this “mining” with the arrival from Moscow Mikhail Degtyarev is unknown, but the festival is now a bass string.

At 14 hours local time the acting Governor was assigned familiarity with subordinates, to the provincial government. As happened when Furgala to the event in the morning began to accredit journalists. It soon became clear that to meet subordinates in the presence of the press Degtyarev is not intended. The journalists said that for them, so be it, I will be a briefing in two hours after the meeting. Then he announced that a briefing is canceled. Then urgently told me to still go. 10 minutes before the collection finally revealed that there will be no briefing. Degtyarev met with members of the government and regional security forces, but words to the press — and in General for residents of the region — it was not.

“Hands off our land!” Live “New” from the meeting in Khabarovsk, the inhabitants of the region took to the streets against the Kremlin-appointed Governor

In the evening it was waiting for Khabarovsk gathered in the square. It seemed logical that the acting designated in a nervous situation, will come to the people “build bridges”. But “bridges” it must be understood, is not necessary.

— If he was a good Governor would come out to us here. Well it is not coming? — said Vyacheslav.

— He was sent here as a whipping boy. Or he’s like a kamikaze came. Or he’s just ambitious and wants power.

And the eleventh rally on the square festival began not with the usual “Furgala home!” and “fuck off!”, addressed to the acting. “Suitcase — Moscow — Samara”, — admonished they Degtyarev, showing that he had studied his biography from birth in the city on the Volga. 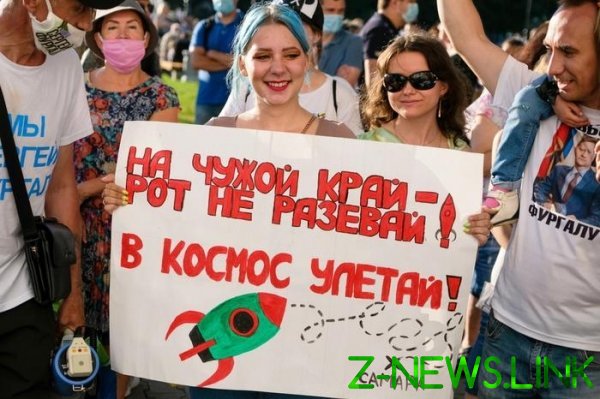 Mikhail Degtyarev 39 years. More than half of his life he moved in politics. With 2011 in the Duma studiously created for himself a very specific reputation. He always wanted to be remembered so much about him said. He gladly offered openly clown the bills like the ban on organ donation for homosexuals and the eradication of dollars in Russia. And no secret why. Promised to fly in space. Ran for mayor of Moscow with the predictable result of 3%. Photographed in the bath with Zhirinovsky. It really remember.

Now in Khabarovsk, where it is necessary to work seriously, clowned he remembered. “Mishan in the bath!” — shouted the people appointed the acting. “Misha 3%” — the people wrote by hand on Whatman’s drawing paper. “In a foreign land did not open his mouth, fly into space”. 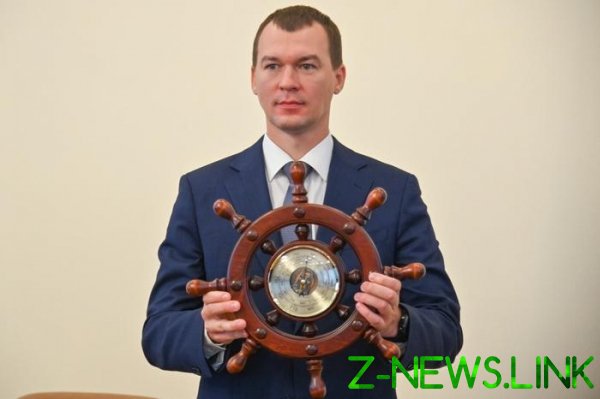 Acting Governor of Khabarovsk Krai Mikhail Degtyarev at the time of submission to the government in the building of the regional Cabinet. Photo: press service of the regional administration / TASS

Got the leader of the LDPR. In fact, the party in Khabarovsk region was to honor here not only the Governor was from the liberal democratic party, but almost all of the regional Parliament. The appointment of the liberal Democrat Degtyarev is a liberal Democrat Furgala changed everything: the people chanted, “Zhirinovsky shame!” and held posters: “Zhirinovsky is a traitor and a liar.” Hardly before the Duma elections, the LDPR will have time here to rehabilitate.

But the main change: the attitude of the festival to the President. Putin was popular in the region. A popular vote on “zeroing” and other amendments it was confirmed: after all, 65% of the “in” — not a bad result. On the square the demonstrators were saying how they love the President, who like their precious Furgal. In conversations with the “New” they expressed the hope of the President that intervened in the mess and fix everything. And here they got Degtyarev. 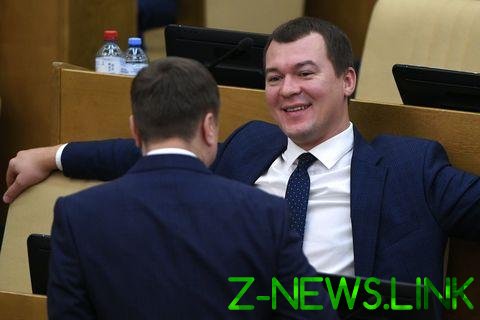 “Acting with a reputation as a clown.” If Mikhail Degtyarev to stop the protests in Khabarovsk

And if earlier attempts to shout something anti-presidential square in Khabarovsk, prevented the protesters themselves, now they chanted in unison: “Twenty years — there is no trust!”, “Putin has lost the trust!”, “Putin resign!”. Loud, megaphone, one of the demonstrators read out a Memorandum: the President has deceived the expectations of the festival, so they just voted for “zeroing”, is now demanding his resignation and early presidential elections. 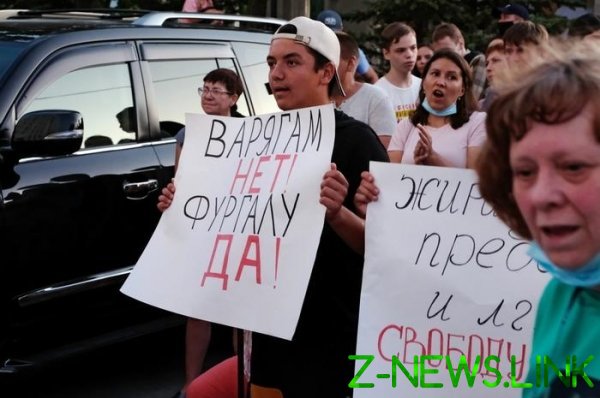 All the time, while people were protesting, shouting and whistling, near the administration building there were two black SUV’s with government plates. First didn’t see them, so the machines connected with the new acting. But nobody is attacking, no bad words shouted to drivers in cars. The protest of the festival is exclusively peaceful.

About ten in the evening, demonstrators began to collapse share. Because in residential homes and in the hospital near the area are asked at this time to be quiet. But tomorrow, the festival will return to the area. And the day after tomorrow.

— People will quit, until they get their way, — said Vyacheslav. Is really over the edge moved.