“The real monster”: a creepy insect terrifies the Network. Video 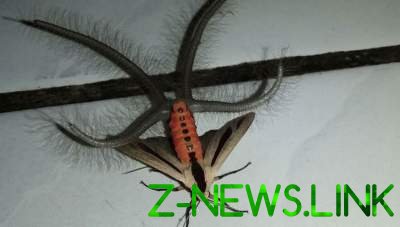 Social media users shocked appearance of unusual insect, which is compared to alien.

In the Internet appeared the video with a previously unknown methylcobalamin insects. The creature in the video has the body of a moth with four tendrils, growing from the abdominal cavity, but his tail ends with a huge hairy appendages. Some people have compared a strange butterfly with a real monster, and others – revived pokemon.

Some even advised found the insect to drop everything and run out of the house, and someone to burn your house.
“What if all moths would look like?”, “My girlfriend would die of horror if I saw it” “it Seems that now I’m afraid of moths”, “This is a real mutant!”, “Some strange thing”, “What is this pokemon?”, “It’s a living pokemon!”, – they responded in the comments on the mysterious creature.

See also:  "Do not want to live": in Kiev, a woman was throwing herself under the wheels of cars. Video

However, biologists have determined that the pictures and videos of quite earthly butterfly male Creatonotos gangis. This insect is found in South-East Asia (China, India, Japan, Thailand) and Northern Australia. Unusual organs are used by males to attract females in the mating season.

Recall, sneaks on flooded after heavy rain the streets of Bangkok’s residents are faced with blocking the way for them four-metre boa constrictor. The animal somehow found herself in the center of the city. An impromptu fight with a big snake was on video.

See also:  The earth with a piece of wood suddenly went under water. Video

We also reported that in the Vietnamese province of Thanh Hoa three-year-old boy took a ride on a giant Python. The child’s family for four years, holds a snake as a pet. On the day when the video was shot in Thanh Hoa it was raining: the water flooded the yard, where Python allowed “to play and relax.”