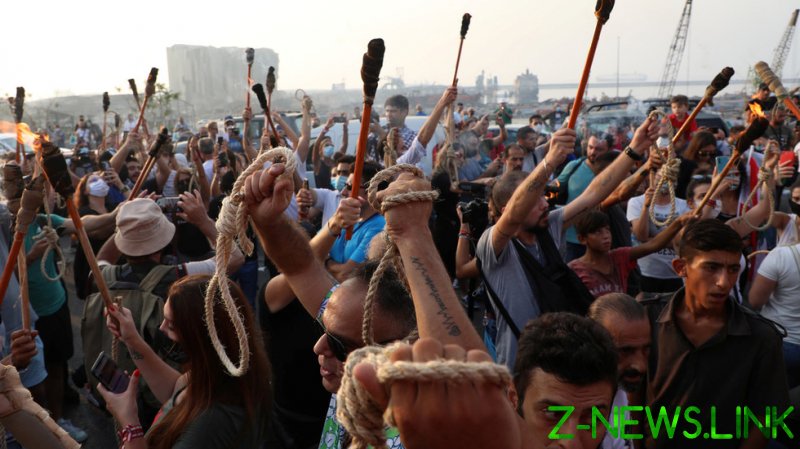 On September 8, the US Department of the Treasury’s Office of Foreign Assets Control (OFAC) imposed sanctions on two former Lebanese government ministers, Yusuf Finyanus and Ali Hassan Khalil, who the office claims have ties to Hezbollah. Washington said the sanctions are an effort to assist the Lebanese people in restructuring their government to fit the demands of protests that have raged across the country since October of 2019.

The cross-sectarian, grassroots protests were sparked in response to widespread government corruption and have only intensified after an explosion rocked the Lebanese capital of Beirut last month killing almost 200 people, injuring hundreds and leveling an entire city district. The cause of the explosion has been confirmed as 2,750 tonnes of ammonium nitrate stored in a warehouse for six years without proper safety precautions. In response to this gross lack of oversight, the entire Lebanese cabinet resigned.

“Corruption has run rampant in Lebanon, and Hezbollah has exploited the political system to spread its malign influence,” said Secretary Steven Mnuchin. “The United States stands with the people of Lebanon in their calls for reform and will continue to use its authorities to target those who oppress and exploit them.”

Finyanus served as the minister of transportation and public works from 2016 until the start of 2020, and Khalil was the minister of finance from 2014 until 2020 and minister of public health from 2011 until 2014. According to the OFAC, the two have no direct ties to the explosion but had an unspecified degree of culpability in oversight.

However, these sanctions have nothing to do with justice for the victims of the horrible tragedy nor the demands of protesters. Instead, they are simply an exploitation of this tragedy to continue to press Washington’s political agenda in Lebanon and the broader region.

As Director of the Center for Middle East Studies at the University of Oklahoma Joshua Landis said on Twitter,“Astonishing that the U.S. would not place sanctions on the Ponzi scheme master-mind who brought ruin to millions of Lebanese, Riad Salame. Instead it sanctions two-bit ministers connected to Hezbollah. Talk about cynical exploitation of port tragedy.”

Landis is correct as indeed the actions of Washington are cynical. Salame is perhaps the figurehead of the country’s corruption and the incumbent governor of Lebanon’s central bank (Banque du Liban, or BdL).

Shortly after the Beirut explosion, the Organized Crime and Corruption Reporting Project (OCCRP) found that Salame quietly invested in overseas assets valued at approximately 100 million US dollars as he encouraged others to invest in the domestic economy and even as the country has tightened its foreign currency withdrawals. He claims that these assets are part of “significant private wealth” he accrued before joining the Сentral Bank in 1993.

A Financial Times’ analysis of leaked audit reports suggests that Salame used potentially illegal accounting methods to artificially boost the bank’s financial assets by around six billion dollars, which he denies. He has been accused in Lebanon of embezzling bank assets and mismanaging public funds; his assets have been frozen and he’s expected to have a hearing before a judge in October which will incidentally be about one year since protests in the country began.

Protesters have demanded a fundamental restructuring of government with all government officials swept away. The Department of Treasury cited in its press release a slogan by protesters – “all of them, means all of them” – and yet Salame remains despite the fact that the entire Lebanese cabinet resigned in the wake of last month’s tragedy.

Moreover, the US has long known about these allegations against Salame. In a diplomatic cable from 2007 published by WikiLeaks, former American Ambassador to Lebanon Jeffrey Feltman noted that he had been made aware that Salame violated numerous laws while acting as the central bank’s head.

Salame is not alone as a laundry list of Lebanese officials have gotten off scot-free from the trigger-happy Washington sanctions regime for corruption, embezzlement and mismanagement of public funds. This shows a tacit endorsement of such practices, and the examples of this taking place not only in Lebanon, but around the world, are seemingly endless. Fighting corruption is very clearly not what any of this is about.

Simply put, these sanctions serve Washington’s geopolitical interests in several ways, namely by punishing officials who have alleged ties to Hezbollah and advancing the narrative that Hezbollah was directly involved in the Beirut explosion last month in order to influence the protests. The US Department of State has made clear its intention to paint the protests as a reaction to perceived “Iranian influence” in the country. Iran is Washington’s main geopolitical foe in the region, while Hezbollah – which bills itself as the Lebanese bloc of the resistance to Israeli aggression – is a natural ally to Iran, which is the primary adversary of Israel in the region. Washington sees Iran and Hezbollah as contiguous.

With the Lebanese economy weakened, Iran has stepped up to the plate by offering assistance to the country. But Washington fears this could turn the whole of Lebanon toward Iran and away from the West. Moreover, weakening Hezbollah, in the eyes of Washington, means taking the wheels off of Iran’s main vehicle for influence in the country.

American analysts understand that the protests in Lebanon, which coincided with worldwide protests against neoliberalism last year, are a direct indictment against their interference in the Lebanese economy. Because of this, they hope to decouple these protests further from Hezbollah, who have long resisted American involvement in the Middle East region, and maintain their disorganized and spontaneous character, possibly even guiding them into a pro-Washington tilt if possible.