Home / policy / The price of oil has fallen, but opposite don’t need to joyfully jump

The price of oil has fallen, but opposite don’t need to joyfully jump 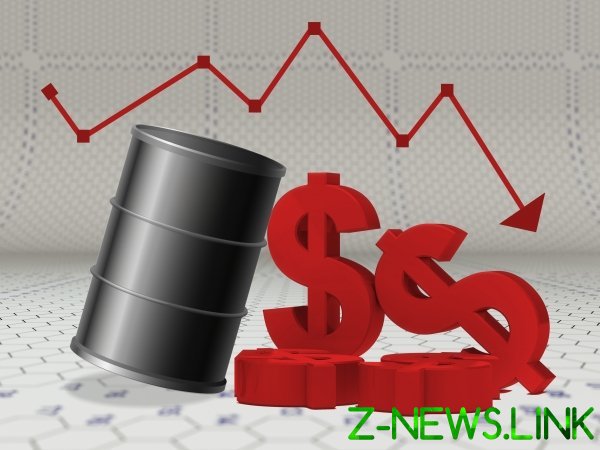 So, the price of WTI oil (us) yesterday fell to negative values.

On this matter amicably have blown up the whole opposite joyful tweets “Well, putinoidy, Khan you with the price of oil minus two dollars!” was heard from Navalny, Gudkov, of Stringology, Prosvirina, Ivanov and other degenerates.

Here only at the price of US shale oil minus two dollars and I feel wonderful, but opposition have to run to wash the trousers.

A number of news publications such as “RBC”, “Izvestiya” and “Vedomosti” wrote that “the Urals crude fell to minus two dollars.” What a stupid lie. Urals fell by two dollars (up to 26.2 per dollar), not TO minus two dollars. Agree, a substantial and fundamental difference.

As they say, “Boris, don’t hire on the case of idiots.”

We will try to understand why the price of us shale oil WTI yesterday went to negative values.

I love these cases because they always demonstrate why physical economists always beat cut off from “earth” theorists (and why one conditional Martsinkevich hundreds of the best conventional Demuro-Zhukovsky).

And so, the economic recession in the United States, economic stagnation in the EU and the global pandemic coronavirus in total caused from the beginning of March, the drop in fuel consumption by about 30%. But since Saudi Arabia all this time, was actively trying to dump prices and flood the markets with cheap oil, production continued to grow.

Unclaimed the difference is instead of the consumption was in the reserves, but the US tanks were filled faster than expected.

For example, Cushing Oklahoma which is the main backup hub for the USA, was a week ago, filled to 70%, and traders say that will score his eyeballs in the next two weeks.

Oil reserves in Cushing rose for the week to April 17, by 9%, to 61 million barrels, according to a report by Genscape. The total storage capacity of about 76 million barrels.

And then there’s the overlap situation with expiring Tuesday crude oil futures. Under the terms of the contract, each owner after the contract is obliged to take of Cushing’s at least 1,000 barrels of oil purchased. And before traders appears unpleasant choice: either to take the oil that they do not need, or to get rid of these items.

As the contracts expire on Tuesday, in the last two hours of Monday’s sale was accelerated and 20 minutes before closing, the price of oil WTI has gone into negative territory.

The lack of storage is a local American situation with shale oil. And so on the price of Brent, Urals and other varieties, it actually is not affected.

Therefore, all Russian opposite, which happily dropped due to falling oil prices, just demonstrated their stupidity, ignorance and anti-Russian (no true patriot would not wish for the collapse of their economies). And in unison dived, sorry for naturalism, head in a rural outhouse.

But the funny thing is not even that.

Trump yesterday at a press conference on the epidemic of the coronavirus, also touched on this topic. And demonstrated their blatant ignorance in this issue (apparently, there and advisers of the corresponding bottom level Tillerson’s gone).

That is, the problems will continue for at least 2-3 weeks and possibly more.

2. Trump also said that he intends to purchase in the state reserve of 75 million barrels of crude oil and it is supposedly correct the situation. But no.

First, because he had once wanted to purchase such quantity of oil to support the industry. But Congress has cut the initiative, without providing funding. And since then nothing has changed that would force Democrats to change their decision.

Second, buy trump those 75 million barrels of oil or not buy – and the size of storage in Cushing from it will be no more. Just all the oil in this store will change the owner, and the new still will be pumping longer.

So shale oil will still have to fold.

And finally a plaque from the Federal energy Commission of Dallas, with calculations, with the price of WTI crude oil extraction at various shale oil becomes profitable. 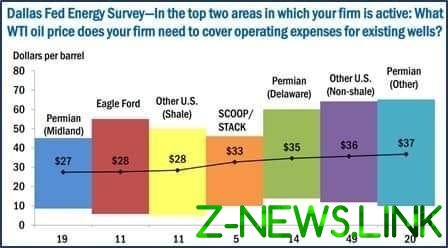 As you can see, for kancevica bad, CR@they shit their polymers.