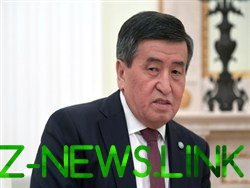 Kyrgyz President Sooronbai Jeenbekov has accused former head of state Almazbek Atambayev in violation of the Constitution. He stated this on Thursday at a meeting of the security Council of the Republic, reports TASS.

According to him, Atambayev had “stiff armed resistance” during the arrest and had “violated the Constitution and the laws.” Jeenbekov recalled that Kyrgyzstan is a state of law whose duty is to ensure strict compliance with the requirements of the law for all citizens.

The head of state called for urgent measures to preserve peace and security in the country.

7 August it was reported about the beginning of the second attempt of storm of a residence in the village of Koi-Tash. According to recent reports, was admitted 47 people, including 23 civilians. One special forces soldier died as a result of his injuries. Against supporters of Atambaev Savelievna case under article “murder”, “mass riot”, “disorderly conduct”, “threat or violence concerning the representative of authority” and “hostage-taking”.

Atambayev was the head of the Kyrgyzstan in the years 2011-2017. Against him being a parliamentary inquiry, the results of which will be transferred to the Prosecutor. Against the former President can initiate a criminal case of corruption, concealment of income and the results premium weapons are members of gangs.