The predicted number of unemployed in Russia by year-end 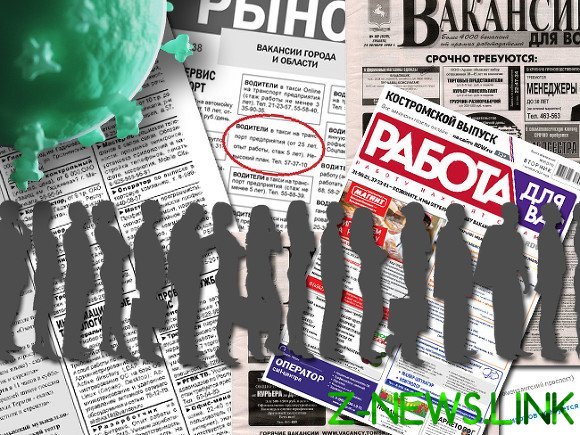 The total number of unemployed in Russia increased in the beginning of summer to 10 million people due to restrictions imposed because of the pandemic coronavirus infection COVID-19 will not change during the year. This forecast was made by the founder of the service to find work Superjob.ru Alexei Zakharov.

In his view, “the growth of real unemployment should not wait”. “In the coming year unemployment will fluctuate around the number of 10 million people”, — quotes “Interfax” expert.

We will remind, on the eve of Russian President Vladimir Putin said at the meeting that the employment centers across the country was 3 million people. According to him, unemployment is still high, and the market difficulties remain.

At the same time, for his part, Putin then added that the authorities managed to prevent “explosive, as in some countries, the dramatic growth of unemployment.”

Was later published data of Rosstat, according to which the overall level of unemployment in Russia rose in may to 6.1% after 5.8% in April and amounted to 4.5 million people. This is the maximum value since March 2012 (when the unemployment rate was 6.3%).

In April 2020, according to the Ministry, the unemployed according to ILO methodology was classified 4.3 million people aged 15 years and older.

The Prime Minister said, “the citizens who applied to the employment service and the unemployed will be offered employment in construction, agriculture or transport, utilities, landscaping, and social services care for the elderly”.

“In addition, in enterprises where employees transferred to part-time employment, it will be possible to arrange for additional temporary work. These measures will help to temporarily employ more than 80 thousand people, — said the head of government.

May 11, Putin announced the end of may 12, a single period of days off, entered March 30, in the fight against COVID-19.

2 Jun Mishustin reported on the nationwide state plan for the recovery of the Russian economy in 2020-2021 years, noting in particular that the cost of the plan will amount to about 5 trillion roubles. June 19, was sent to the President a revised draft of the national plan.