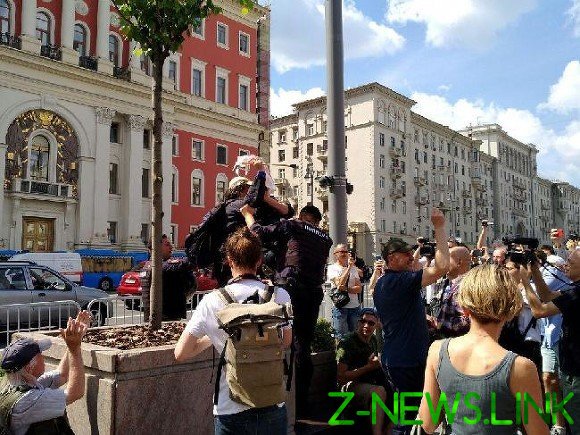 1. To resolve two contradictory tasks — to meet, to scare the officials with Ghost yellow jackets, the orange revolution, the rise of political extremism and other “New grandeur” — and not to gather in one place, to be able to understate the number of protesters and to avoid a kind of collective political action.

2. Issues highlighted by the protest are not interpreted as political. And not searched for the actual policy prescriptions that will not allow the loyalists and critics of the authorities one day to find that their little parts.

3. Being internally unified in the understanding of the (largely erroneous) of nature and the energy of protest and the mechanisms of its suppression, continues to use the equity to transfer some of the power groups of the greetings to others. It is inevitable, because in fact in many respects it is the content of domestic policy.

4. Really no power (perhaps because of a General increase in the average age of designmaker) nor the police are the bearer of such radicalism, which itself wants to present (about the smearing of the liver of the protesters on the pavement, etc.). The response of law enforcement (with a few, albeit significant, exceptions) almost never goes beyond the behavior of people incapable of managing their own aggression. The more that the legal basis of the overlap of sidewalks citizens is very shaky and questionable.

5. Not therapywhat possible reduction in the motivation part of the coordinated candidates in the elections to the Moscow city Duma (they were invited in the Presidium of the person to trade — and now this).

1. Based on the idea of the inevitability of escalating protests from quantity to quality. Which is not happening for the seventh year.

2. Mechanical projects on contemporary events the history of the late 80s — early 90s, when the level of political and historical dynamics was principialno above. As well as the events of the colour revolutions in the former Soviet Union, which often was much more powerful internal reasons.

3. Continues to exploit the theme of mobilization on the basis of moral opposition (thesis on the discrepancy between the formal actions of the authorities and the police to the constitutional spirit of freedom of elections and meeting), which quickly ignited and quickly fades — as the theme of morality may not be in the top for many weeks/months.

4. Remains of little interest to the apolitical part of the population.

5. Turns into a full-fledged political entity, capable of formulating strategies and with mechanisms for resolving internal contradictions.