The power to behave like human beings is not going 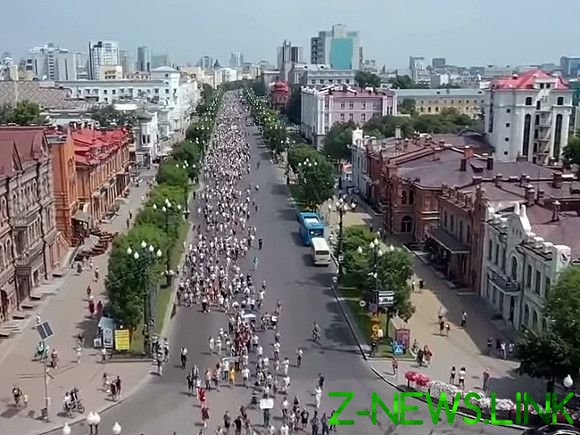 About Khabarovsk, at the end of watching the video, reading, social media, and several interviews.

1. Protest won’t fade. Judging by the video from the copter, in the stock 18 and 25 July was attended by approximately the same number of people.

2. On behalf of the protesters no one speaks — apparently, nobody wants to be substituted. However, the requirement of an open trial of Forgalom in Khabarovsk with participation of court of jurors has remained unchanged for the last three rallies. This agenda is shared by most protesters is the result of how the collective mind of the discussions in votsap groups and telegram channels.

3. People are very unhappy with the loss of political subjectivity. According to my interlocutor, “people hate what they do not hear or perceive syctom for dialogue.” How come they chose Furgala, and takes him out of Putin. Some point out the responsibility that the residents of Khabarovsk are to other regions — “at us now the whole country is watching”. Many speak about federalization, greater autonomy for the regions. Became noticeably more anti-Putin slogans, not only on stocks in the week (which involved fewer people, and because, the mood is more radical), but on the last big Saturday rally. Initially people were hoping for a favorable solution of the issue and tried to limit his criticism; now hope has become smaller, although anti-Putin slogans are not Central. Great irritation is caused by some local things — for example, the figure of the mayor of Khabarovsk Kravchuk. Separatist demands there.

4. The protesters less than is commonly believed. No 80 or 50 or 30 thousand participants. In the video, filmed with a camera, visible column, stretching along the street Lenin at 500-600 meters, and a width of approximately 10 meters. For comparison, on Sakharov Avenue (where in December 2011 could really gather 100 thousand people) the width of the roadway with sidewalks more than 40 meters, and people did not go, and had a more dense crowd. Still, the scale of the Khabarovsk stock is very large.

5. The power to negotiate and act like humans does not intend (as a matter of principle, and because I do not know how to do it). The pressure began — before the action on 25 July broke (not much) two activists; there have been reports about calls from the precinct with a proposal to “chat”; however, until the pressure level is small. At the same time it arranged a farce. The meeting sent from Moscow acting Governor Degtyareva with the protesters was the statement: “it Ends the 16 day of the meeting, at approximately 22:30 p.m. almost all participants disperse, the scene is free… to the remaining handful of people, most of whom no one familiar strange faces, it turns out the protege Degtyarev… Around… trying to ask Degtyarev questions about Furgala, but these issues perekrikivayutsya, filled with background set for this people.” At the meetings began to be provocateurs.

6. The level of self-organization and civic consciousness is very high. The share-friendly atmosphere, people go on holiday with the kids, and clean up after themselves, which is surprising utilities. Police consider the man a kindness, if not unity with the audience. Social networks allow quickly expose fakes that (in combination with common sense) reduces the authorities ‘ ability to manipulate people and fool them. For example, the staged “meetings Degtyareva with the protesters,” immediately became public knowledge.

7. Local and Federal public officials and politicians is completely eliminated from the event, took a mouthful of water. According to my companion, almost none of the more or less famous people not ready to give political commentary to the events — with the exception of Navalny headquarters in Khabarovsk; but some protesters initially wary, fearing that the Association of protest with the FBC could trigger a power confrontation. Except that the protesters in Komsomolsk-on-Amur, came the mayor of this town and thanked the audience. With words of support for the festival was also made by the actor Gosha Kutsenko and Yuri Shevchuk.