Home / policy / The pogroms in America will cover the repression in Russia? 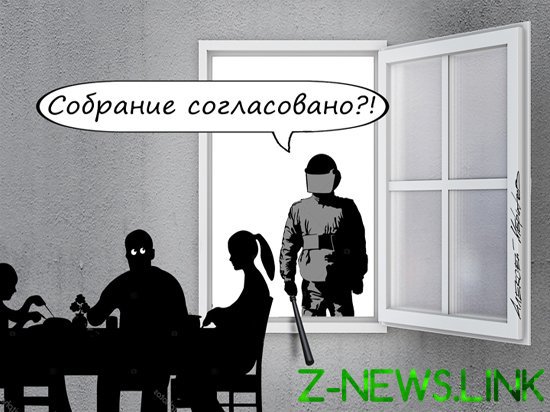 The Kremlin propaganda in the Soviet relishes the riots in the United States. And they also justify our home enforcement arbitrariness.

Burning cars, attacking the chain of security officers, fighters for a cause with covered faces and the fire in the hands — it all plays of the Russian Pro-government media with the same gusto with which their Soviet predecessors have acquainted our people with American horror of the last century.

The difference is in nuances. Today in a government report from the US a little more ostentatious of objectivism, which, however, can be seen a kind of humor: “In the center of Atlanta outraged by the impunity of the police citizens ransacked the headquarters of CNN. They smashed the glass walls of the office and painted the logo of TV offensive slogans.”

Only a knowledgeable part of our audience will catch a snide subtext. The staff of this channel, a fallen victim of the “outraged citizens” have long been at loggerheads with Putin’s other trump. And now, after trying to link the riots with some Russian incitement, trump called CNN losers, the manufacturers of fakes and Chinese mercenaries.

Not being a fan of the American President, will say they also doubt the ability of domestic propaganda to remotely organize riots on such a scale. As in the other popular explanation of the disorder state antitermite — what is the root of all evils in the institutional racism of the whites. For crushing, which is supposedly elect of the democratic candidate for the fall presidential election.

Don’t know, so it really is pervasive in today’s America, the dominance of the white Protestant minority. But if this domination over the eight years of government has failed to break Barack Obama himself, it is unlikely that such a task is on the shoulder of his former Vice-President, an elderly and not very intelligent Joe Biden. Although his chances to change the trump and feel good.

However, all this difficulty a distant and foreign power.

As for the USSR, America forty years was the main geopolitical and ideological enemy, the picture is there the horror with the obligatory inclusion of stories about police brutality had once daily propaganda dish. And now suddenly again it was, it’s so many decades.

In one important feature. The average Soviet man never came to compare the American police state from their home. What “they” screw what some thugs who tried to break through to the White Lomu, is outrageous. And that “we” send to the colony intellectual, left on Red square with the poster — it is clear by itself. Do not compare the same. “They” and “we” were two completely different worlds that in Soviet minds do not overlap.

Now intersect. Close to the authorities and celebatory Telegram-agitators today are not only indignant and gloating, but smug and instruct citizens. You say, offended that you summer was only beaten in the streets, and then sent them under arrest, so we’ll see how your beloved America, unhappy fuck rubber bullets.

And don’t say you were protesting peacefully, but they didn’t. Who today would throw in rogatica Cup tomorrow be sure to go to throw grenades and loot shops. It was explained to the repression of our leader — and now, looking at the American chronicle, thinking probably about how right he was.

Soviet authorities to justify their repression is absolutely not needed in references to Western enforcement experience. Our — needs. More recently, frightened by the consequences of the actions of the French “yellow jackets.” Now, with much more passion, talk about the American nightmare of the pogroms.

Do you want to make it in America? If not, don’t be surprised that suppressed your every gesture. Do not complain about the arrests of journalists over the pickets. Yes, before is allowed, and we’re not now. America much opened our eyes!

But for all its intensity, a protective ecstasy camouflaged sort of official detachment.

“We have our own agenda and, thank God, what is happening in America, we are not going on. Abuse of authority by police officers is a topic which is strictly regulated by applicable laws and official regulations. I can’t agree that this topic is now so acute in our country. Any Parallels we do not see”.

So says press Secretary Peskov. And says not in vain. After all, just this week in Yekaterinburg, the SWAT officers caught the man suspected in the theft of the Wallpaper, and killed him, allegedly while trying to drag.

The similarity with the story of the death of George Floyd very close. But non-negotiable. And the speaker of the Kremlin readily explains why: “We don’t know for sure what happened there, and not knowing, somehow to discuss it or comment on it would be wrong”.

These are the words, which in any case can not say about the case of Floyd no significant American politician. Otherwise, his career is over.

There the upper classes squabbling among themselves, trying to put the crisis to their service, but to cover up his I can not. Our tops are imagining that you can cover up anything, and in other people’s crises looking for a new proof of his obsessive fears and repressive tendencies.