Home / Video news / The player passed all the field on my knees, fulfilling my promise. Video

The player passed all the field on my knees, fulfilling my promise. Video 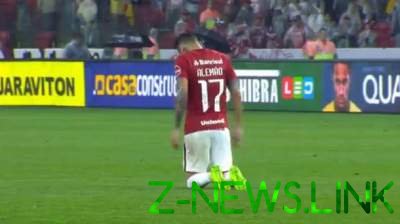 Internacional defender Alemao resumed after the injury, and fulfilled his promise.

Defender of the Brazilian club “Internacional” Alemao crossed a football field on his knees after the match against the team of “Figueirense” (3:0). Thus the player has fulfilled the vow made to God in difficult times.

In the beginning of this year 27-year-old Alemao received a severe injury – a broken leg. During rehabilitation he was having even more serious complications such as swelling of bone tissue that threatened to leave him disabled.

Desperate to heal completely, the defender promised to crawl through the whole stadium on my knees if he would still be able to return to duty.

In the game against “Figueirense” he appeared on the field for the first time after five months spent in the infirmary, and had not forgotten his promise.