Home / business / The people who came on the exchange of prisoners, refusing to return “LDNR”

The people who came on the exchange of prisoners, refusing to return “LDNR” 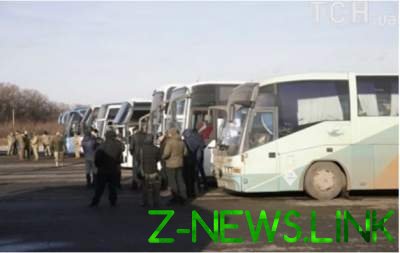 People who do not want to return to the separatists, the border will sign the appropriate documents and return to Ukraine.

At least 10-15 people, who were brought to exchange for the Ukrainian military plan to declare refusal to move to the territory ORDO.

For a destination near the checkpoint Maori arrived about ten buses with the people you plan to exchange for Ukrainian hostages.

Journalists managed to talk with three of them. So, among them is the man accused in the events of may 2 in Odessa. He is under house arrest. Says that they will refuse to exchange, return to Odessa and will sit under house arrest, will continue to sue.

The second man, who was detained for theft in Kharkov, declared that doesn’t understand how the ranked lists of the separatists.

Another guy confessed, but hinted that about six months was on the occupied territory in the ranks of illegal armed groups. When he returned to the territory controlled by Ukraine, he was arrested and sentenced to eight years in prison. He is now serving time.

The man says that he will return in the Ukrainian prison to serve and to be pure before the law.

“Better in jail than on the exchange,” he added.