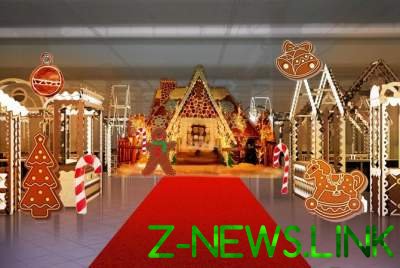 In Kiev have prepared a rich program of celebration of New year and Christmas, from December 16 to open the location of large-scale cultural project “Neoric Sophia”.

This reports the press service of Kyiv city state administration.

Places to celebrate will be open until January 14 in Sofia, Mykhailivska squares, Vladimirsky passage (from Mikhailovskaya square to the intersection with Tarasova).

Main Christmas tree is traditionally lit on St. Nicholas Day – December 19 at 19:00 at the Sofia area. Also on this day, the district will light the Christmas tree.

January 7, at St. Sophia square will host a Christmas parade of stargazers and a concert.

In the Park Shevchenko offers fair, entertainment and activities for children and adults “Christmas adventure in the ice Kingdom.”

And at the Mariinsky Park will host a number of activities within the framework of the cultural project “small Town Santa”.

From 17 to 29 December at the National circus of Ukraine (Peremohy square, 2) will show “Christmas fantasy”, in the National Palace of arts “Ukraine” (vul Velyka Vasylkivska 103) – the play “the Thief of Christmas”.

From 18 to 20 December for children-orphans and children deprived of parental care will be held on the feast of St. Nicholas.

December 19, at Kontraktova square will be Christmas-Christmas fair and ice rink, which will run until January 16. From 26 December to 9 January everyone will be able to visit the fabulous sculpture Park and rides “tales of the old Podil”.

Also for children will be held new year’s performances “Walks the earth Saint Nicholas” in the column hall of Kyiv city state administration on December 19-20.

December 22 from 10:00 to 16:00 there will be a charity event for children of different social categories of “warm heart”.

In the Central house of artists (street Sich Riflemen, 1-5) from 22 December to 14 January will be the Ukrainian Christmas exhibition.

In Kreschaty Park from 23 December until 14 January, residents and guests of the city will be able to attend the festival “Carol fest”. For everyone on the platform near the arch of Friendship of peoples will be working new year’s DJ market.