Home / WORLD / The Pence-Harris debate shows the Democrat and Republican leaders are on different trains, with voters stranded at the station

The Pence-Harris debate shows the Democrat and Republican leaders are on different trains, with voters stranded at the station 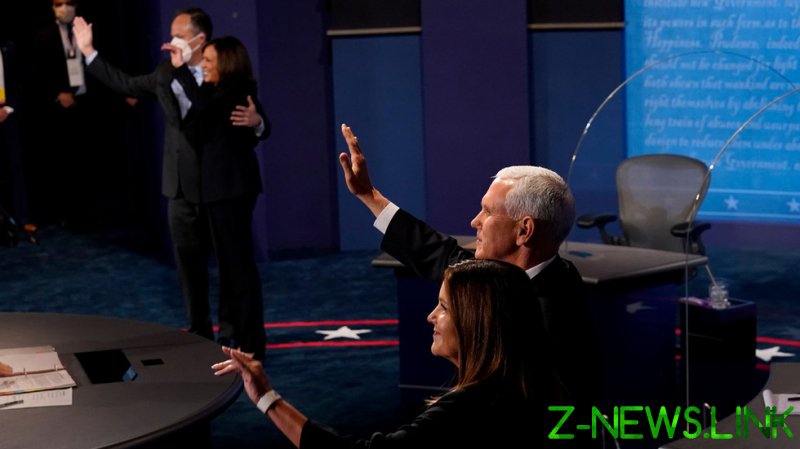 Behind the protective covering of plexiglass barriers, and with Trump back at the White House playing fact-checker over Twitter in real time, things got testy fast, as Pence and Harris locked horns over the Trump administration’s handling of the coronavirus pandemic. The ensuing blame game came as no surprise, and served only to further divide the country at a time when what it really needs is solutions.

Harris, for example, characterized Trump and Pence’s handling of the crisis as the “greatest failure of any presidential administration” in US history, while exposing severe symptoms of Trump Derangement Syndrome by saying she would never take a vaccine that was endorsed by the American leader.

Pence went on to chide Harris, saying her remark helped to undermine “confidence in the hope for a vaccine.” Then, in a shot aimed directly at Biden, he accused the Democratic candidate of copying the Trump plan for tackling Covid (“advancing testing, developing a vaccine, etc.”), saying it was “plagiarism … something Joe Biden knows a little bit about.” Pence was referencing a 1987 scandal when Biden was accused of plagiarizing a British politician during a debate.

So, here we have a familiar scene from the same old American tragedy: two political candidates from two different sides of the political universe attempting to score cheap points, this time from a pandemic, while the American viewers must be content with a raw dish of partisan politics. That’s deeply concerning, given that many American families are struggling to survive Covid’s devastating social and economic fallout, which is proving almost as deadly as the virus itself.

The candidates were also forced to consider another intractable issue said to be splitting the country, and that is climate change. Personally, I doubt that many Americans are losing much sleep over this purported crisis, especially with far more immediate issues hitting closer to home, like keeping food on the table amid lockdowns and the occasional sporadic outbreak of urban violence. But I digress.

As with the coronavirus, Harris accused the Trump administration of being “science deniers” and continuing with practices that present an “existential threat” to the planet. Pence, in his turn, blamed environmental problems on the careless practices of (Democratic) leaders. He alluded to the state of California, for example, where recent wildfires have destroyed millions of acres of woodland and private property, for not managing its forests more effectively, while saying that hurricane activity has not changed in the past 100 years. ‘So, what’s the urgency?’ was the implication.

The debate continued on in this same vein, with the two candidates exchanging pot shots over everything from the race-fueled violence that has swept the country to the state of relations with distant China. In other words, another Punch and Judy show, in which the American voter back home is held hostage by the same old canned choices.

Is there any hope for a real national reconciliation when the Democrats and Republican camps have already dug deep trenches around their beliefs, not to mention their Twitter accounts, and nothing either candidate says will have much impact on how Americans will vote? It’s a paradox that the level of dialogue in the US has become almost poisonous while the means of communication have never been greater. Little wonder, then, that many people are questioning the wisdom of holding these political shows in the first place.

Have US debates become meaningless spectacles?

The debate between Mike Pence and Kamala Harris, much like the disastrous showdown between Trump and Biden, amplified the feeling that Republicans and Democrats are on different trains heading in opposite directions, while the American voter has been left stranded at the station.

With this line of inquiry, it is necessary to discuss the moderating procedures for the debates, this latest one overseen by Susan Page, Washington Bureau Chief for USA Today. As these intensely regulated political events now involve just three people – the two candidates and a moderator – the performance of the latter is of no small consideration, as they have the power to guide the discussion according to their own convictions. In fact, there were moments when Page seems to have let her political mask slip, so to speak, with regards to her personal preference in the contest.

One of the most telling moments came during the discussion on the Supreme Court, which just suffered the loss of Ruth Bader Ginsburg, thus throwing open the possibility that Amy Coney Barrett, a staunch Catholic opposed to abortion, will fill that seat before November 3. Democrats, incensed by that possibility, responded by saying they will pack the court with more seats, thereby derailing the conservative advance. Pence was practically forced to play moderator himself, repeatedly asking Harris if the Democrats will “pack the court” in the event of a Biden-Harris victory. Page never asked Harris to answer the question, which is strange, because the preservation of ‘separation of powers’ constitutes the very foundation of US government.

Another disturbing moment came during a question on the “peaceful transition of power” in the event that Joe Biden wins. This extremely provocative question, which assumes that a) Trump will likely lose, and, b) he would recklessly ignore the will of the voters in the event of a fair election, is never presented the other way around. Yet certainly Susan Page remembers, as Mike Pence reminded us during the debate, that the Democratic Party “has spent the last three and a half years trying to overturn the results of the last election.” In August, former presidential candidate Hillary Clinton said in an interview that Joe Biden “should not concede the election under any circumstances.”

Meanwhile, both candidates dodged the question over “presidential disability” – as to whether or not Donald Trump and Joseph Biden, both men of advanced age, are fit to hold office. Page did not press the issue, which is strange, because Trump, 74, was just diagnosed with Covid, whereas Biden, 77, and his cognitive abilities have been the source of speculation for a long time.

Given the high possibility of political intrigue manipulating the debates, why not return to good old-fashioned ‘town hall’ events, where Americans from all walks of life are invited to ask the candidates a number of questions without the meddling of moderators. And while we’re at it, why not have more than just the standard, establishment-approved Democrat and Republican representatives year after year?

Somewhere on the road to the golden city of democracy, Americans got it stuck in their heads, or had it implanted there, that US elections must resemble the Super Bowl, with exactly two teams going head-to-head year after dismal year. Why let a single moderator suck up all the air in the room, possibly working to the advantage of one of the candidates, when a third-party candidate, with new ideas and solutions, would contribute so much more to the event?

Of course, such a radical change of events would require a major overhaul of the US political system, forcing the Republicans and Democrats to surrender their stranglehold on Washington. It would also require ending the Commission on Presidential Debates – an organization literally owned by the dual-party system that practically guarantees the absence of a third-party voice.