‘The pass shall not pass!’ Protesters take to streets across France after Macron drops vaccine passport bombshell (PHOTOS, VIDEO) 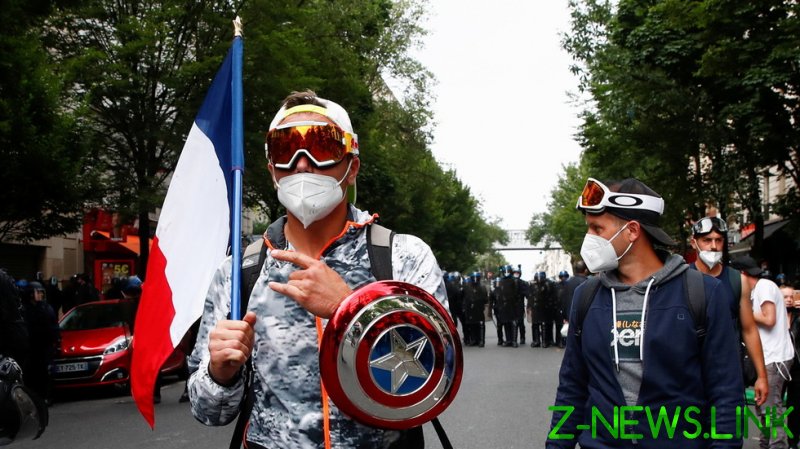 Mass protests all over the country took place on Bastille Day, the anniversary of the 1789 storming of the notorious Paris dungeon that kicked off the French revolution. In Paris, police fired tear gas to suppress the demonstrators.

Photos and video from the capital showed protesters erecting barricades from materials found at a construction site. Some building machinery left unattended was apparently set on fire as well.

One of the observers lamented the destruction of the mechanical digger, saying that the city’s ubiquitous electric scooters would have made a better pyre.

RT France’s Charles Baudry captured video from Paris showing that things calmed down a bit as the afternoon wore on. His photos from during the day showed the extent and the energy of the demonstrations.

Social media posts about the protests included the hashtags #PassSanitaire and #VaccinObligatoire, referring to Monday’s announcement by Macron that healthcare workers will have to get vaccinated against Covid-19 by September 15, or face losing their jobs.

Moreover, a “health pass” to be introduced in August will limit entry to bars, restaurants, cafes and shopping centers in favor of those who’ve either tested negative, are fully vaccinated, or recently recovered from the virus. Macron had previously promised there would be no vaccine mandate or health passports.

French outrage wasn’t limited to Paris, either. Videos from around the country show protests in Toulouse and Marseilles in the south, Haute-Savoie in the southeast, and Nantes in the west, among other places.

“The pass shall not pass!” was the chant of demonstrators besieging the prefecture building in Nantes.

Tags across after France macron protesters shall streets