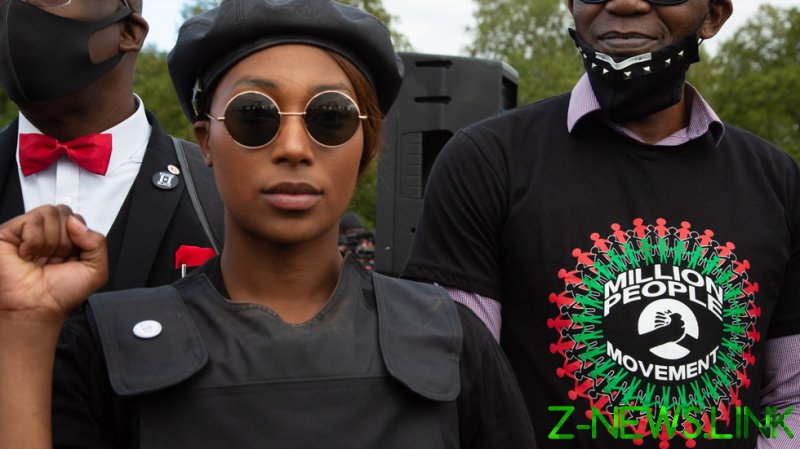 Another day has dawned in Britain, and with it yet another ridiculous demand from the intersectional left. During a Million Person March (attended, er, by around 400 people) in London, a BLM leader announced they would be forming the first black-led political party in Britain. This party will be called the Taking the Initiative Party (TTIP), which as names go makes Change UK look like a triumph of branding. Catchy names used to at least be something lefties could manage, the Khmer Rouge, the Baader-Meinhof Gang, the Tooting Popular Front etc., but I digress.

Though this party will be “black led,” it will be a party for the “working class,” so quite why the racial aspect is necessary if this is a class-based movement is anybody’s guess, but it probably has something to do with the person who announced its formation.

The TTIP was revealed to the world by a lady named Sasha Johnson. According to a vomit inducingly obsequious interview with a YouTube channel called Oxfordshire Youth, Sasha is an “amazing youth worker, freedom fighter, activist and business owner.” Apparently not content with those accolades, she also unironically calls herself “Oxford’s Black Panther.” She doesn’t explicitly say whether by that she means she is a fictional superhero from Wakanda or a member of the Marxist Black Power organisation from the US, but based on her preference for a beret over a Vibranium catsuit, we can assume the latter.

Sasha has had an eventful few months since the Black Lives Matter movement kicked off again. As a result of this she says she has become a “symbol of the revolution.” So, what kind of revolution is this pound shop Che Guevara planning? Well, a communist one, obviously, but one with a healthy side of racial supremacy to go with the Marxism.

Ms Johnson first came to national attention a few weeks ago after she was filmed repeatedly calling a black man who didn’t believe that the UK was a systemically racist country a “coon,” apparently threatening him with violence, then taking exception with him for “calling a black woman angry” after she explicitly said she was. The unedifying exchange can be seen here.

Another video shows her done up like Wolfie Smith and calling for the establishment of a “Black Militia” in the UK. During an incoherent attempt at rabble rousing, she says that capitalism is only possible off the back of racism, claims that the police are no different from the KKK but also need to start litter picking for the council, and dismisses David Lammy, Sadiq Khan and Priti Patel as “tokenistic.” There then follows an embarrassing call and response section where she leads chants of “no justice, no peace,”“take it to the streets, f*** the police,”“black power” and “one solution, revolution.”

The whole thing is painfully cringe making, mainly because of how lacklustre the crowd are, but also for the ridiculous American imagery that doesn’t translate to Britain. This is Oxford, not Oakland, and it’s as embarrassing as hearing an accountant from Hampshire say fanny-pack or trash-can. However, the clip is worth watching just to see how uncomfortable the white woman in her entourage looks when she gives the Black Power salute.

But what has riled Johnson into this revolutionary zeal? Well, in her own words it was the “massacre” and “assassination” of George Floyd. Quite why a death in America warrants a revolution in Britain is a mystery to me, but Johnson is quite adamant about it. It also isn’t immediately obvious why communism will solve racism, but she is equally steadfast on that position, despite being a business owner. She runs a café in Oxford selling food from the Island and the Motherland, which one assumes means Jamaica and Africa, although it isn’t expressly stated. I’m no communist, but I’m fairly certain owning a business puts you in the bourgeoisie rather than the proletariat.

So, what of this new party, the TTIP? Well, in her own words: “We are tired of being let down by Labour, Conservatives, and Lib-Dem and all of them. We want our own political party, one that reflects the multicultural nation that we have become.” The fact that the last election saw the most BAME MPs ever elected won’t do for Sasha, as all these people are “Uncle Toms” to her. It also appears that this new party won’t be much of a fan of Britain, given that at the same event where she announced it, protesters were carrying a blood-stained Union Jack.

Even Johnson’s claims for wanting “equality” seem not to hold up to scrutiny or fall into a distinctly Orwellian outcome of some people being more equal than others. Her Twitter account has recently been suspended after she pinned a tweet to her profile which read: “The white man will not be our equal but our slave. History is changing. No justice, no peace #BLM.”

There is little doubt that had the roles been reversed, and a prominent member of the EDL or Britain First had tweeted that black people would be “slaves,” the Old Bill would have been knocking on their door the second they hit send. Johnson is a black supremacist and is apparently finding it increasingly hard to disguise her disgust for white people and “race traitors” from the black community. The fact that Black Lives Matter UK has not denounced her blatant racism and inflammatory language does the movement no favours.

Oxford’s Black Panther seems to have little in common with the hero of the movie T’Challa (excellently played by the dearly departed Chadwick Boseman) and have a view of the world much more akin to the villain of the piece, Killmonger, who wants to use Wakanda’s technology to wreak havoc on the white west.

The left can try and argue that racism is about systems and power structures all they like, but the rest of us know it is hatred of another race. Johnson plainly hates white people and the mere fact that she is black should not give her a free pass. She can dress up as Che Guevara all she likes, but in reality, she’s nowhere near as glamorous as the Argentine revolutionary; she’s a black, female Nick Griffin with even less charisma.