The OSCE reported new casualties among the civilian population of Donbass 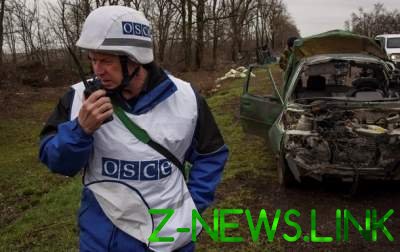 For two weeks the OSCE observers recorded over 13 thousand violations of the cease-fire.

In the period from 8 to 21 April in the Donbass killed two civilians and nine injured. This is stated in the report of Special monitoring mission (SMM) of the OSCE, published on Thursday, April 25.

“In the period from 8 to 21 April, the mission confirmed the information about two dead and nine wounded civilians. Thus, the total number of civilian casualties from 1 January 2019 to 31 people: five dead and 26 wounded”, – stated in the message.

In addition, the OSCE recorded more than 13 thousand violations of the cease-fire (compared to approximately 14700 last two-week period), and 270 pieces of weapons placed in violation of the agreed withdrawal lines (in particular 218 in uncontrolled government areas).

It is noted that the observers were again faced with restrictions on movement and other obstacles to the implementation of the mission mandate – 46 cases in the areas controlled by separatists and six in the territory under the control of the APU.