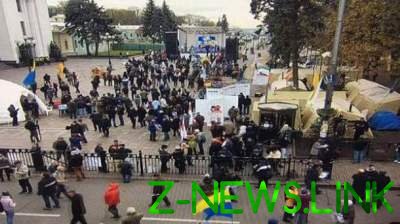 To the previous demands of the protesters added a new provision – extraordinary elections of the President and the Verkhovna Rada.

Today, October 29, under the walls of Parliament began Assembly. Organizers announced the new demands to the authorities.

Veche, which brought together about a thousand people, began with the anthem of Ukraine.

Now on stage are the representatives of different political forces. In particular, among those present – President Mikheil Saakashvili, MPs Yuriy Derevyanko and Viktor Chumak. The latter noted that “people today took to the chamber because of the lies of power.”

To the previous demands of the protesters (the anti-corruption court, the abolition of parliamentary immunity and the creation of a new electoral system – 24) added new provisions – extraordinary elections of the President and the Verkhovna Rada.

See also:  Moscow mayor's office agreed to a request to hold a rally on Sakharov Avenue on August 25