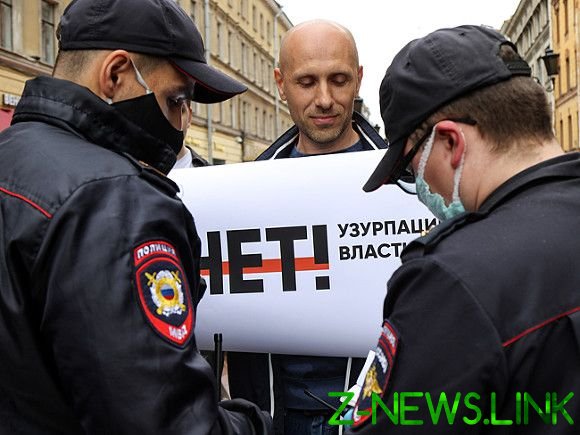 All their protests, the opposition is referring to one destination — the country’s political leadership, Putin. Well, in those cases when we are talking about the protest at the regional level, the role Putin is playing the Governor. In any case, it is first person. It was the first of the persons being accused of something, and something is required from them.

Meanwhile, the security forces are very much to blame. They are a real stronghold of any authoritarian regime, all other instruments through which he holds power, are complementary. This is especially evident in the last time.

Perhaps our opposition, it makes sense to start to appeal to the law enforcers themselves. To organize protests, directed not to the Kremlin, and directly to the people in uniform. The message is clear, over the last two and a half hundreds of years, they have not changed: “To your bayonets held the throne of autocracy”, “we have enough stud to attach them to the muzzle of each rifle”, “militia with the people”, “people in uniform are also part of society,” “serve the country, not corrupt officials”, “don’t shoot”, etc. the security forces can and should tell the same thing, the claims about which the opposition used to pay to the authorities. Corruption, economic inefficiency, suppression of freedoms, electoral fraud — yet these are all things law enforcement officers habitually deduce for brackets. Not appeal to them. But if they understand that the appeal to them, then they slowly begin to listen and reflect. To ignore the obvious, it will be harder.

Particularly effective such promotion can be in the regions. Anti-Moscow sentiment was stronger and the opposition may use them. An appeal to the Khabarovsk security officers “you’re also our local” can be unexpectedly effective.

In fact, it is important not so much the arguments as the fact of involvement of law enforcers in a dialogue. “If the opposition come to us, so they have something to say,” like this idea — not even thought, and feeling — will be the main consequence of the introduction of the new format. This impression is the most valuable thing in politics. It creates a sense of power and the historical right, which, in fact, control the behavior of the masses.

This is a work which cannot be neglected. As Trotsky wrote: “Surely the fate of every revolution at a known stage is allowed to fracture the mood of the army. Against a numerous, disciplined, well-armed and ably led military force, unarmed or almost unarmed masses of the people could not win”. And further: “So, on the streets and squares, the bridges, at the barrack gate was a continuous, dramatic, obscure, but always a desperate struggle for the soul of the soldier.”