Home / WORLD / The New York Times is pushing for George W. Bush to be the US vaccine envoy…has the world not suffered enough?

The New York Times is pushing for George W. Bush to be the US vaccine envoy…has the world not suffered enough? 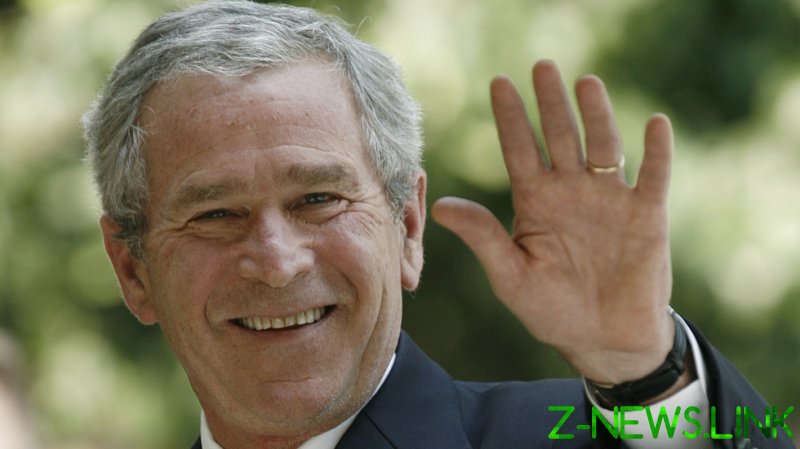 Bush, oped columnist James Harding admits, is remembered by “the world” for Iraq – the war Americans were promised would be a “cakewalk,” in which kids would rush to welcome US troops with flowers – which turned out to be IEDs, planted less by kids than by Iraqis who wanted us to stop stealing their country’s oil and priceless artifacts. But that’s enough of a stroll down memory lane for Harding – he wants us to remember that Bush was “also the first global health president.”

What does that mean, exactly? He’s referring to PEPFAR (President’s Emergency Plan for AIDS Relief), a flashy and difficult-to-evaluate but enormously expensive AIDS program credited by some with helping bring down the cases of the disease in Africa. However, it’s impossible to credit any one program for the absence of a disease – PEPFAR hasn’t come up with a cure or a vaccine for HIV or AIDS, endpoints which could be proved and measured. This makes holding it up as a raging global health success, especially given the $87 billion price tag of other people’s money Bush directed at it, debatable at best. Big flashy disease campaigns also suck up money that might otherwise have been used to improve living conditions to help eradicate that disease – something many impoverished nations are already familiar with via other forms of aid fraud that become their own self-perpetuating grift systems for the wealthy West.

But Harding admits he doesn’t want Bush pushing vaccines because of the man’s bedside manner, or because he has the best hook-ups in medicine. No, he wants someone who can “use the bully pulpit and back-room pressure to get world leaders, pharmaceutical leaders and health agencies to urgently accelerate the funding, delivery and distribution of vaccines.” Basically, he’s been watching Tony Blair go to work pushing a global Covid passport in the UK and is starting to get jealous. Time, Harding (a former BBC News director) is telling Tony and George, to get the blood-soaked band back together.

What this attempt to whitewash Bush – whose wars killed millions in the Middle East – as some kind of global healer does prove, however, is Bush’s ability to generate international goodwill using American taxpayer dollars even as he commits war crimes on a grand scale against an invisible enemy. After four years screaming about Trump, few Americans on the Left can even remember the Bush years, even though plenty of them marched against the then-president’s wars (before Obama learned it was just easier not to call them wars). Which is perfect for Bush as Covid ambassador – liberals will back him, and Harding believes conservatives will too, though a few of them have lost their appetite for the endless spending that came with the Bush years after Biden (and Trump before him) really turned on the firehose.

Bush also proved adept at squandering Americans’ money on projects that generated bad publicity, like the 2008 TARP bailout that followed the mortgage crisis – a wildly unpopular settlement which rewarded the bad banks for defrauding the country. His administration managed to time that crisis so adeptly it landed right in his successor Obama’s lap – where it would be implemented to perfection by a cabinet chosen by Citigroup, one of the banks it was supposed to punish.

The important part is that Bush never had to pay for any of his ‘mistakes’. He slunk out of office with his tail between his legs, sure, but soon enough he was painting up a storm with sloppy renditions of cats, world leaders, himself in the shower, and so on. Americans were too busy fighting to stay in their homes to line up at his with pitchforks. Obama turned out to be the huge disappointment a small but perceptive group of lefties watching his cabinet swell with Citi alumni had always said he would be, and the War on Terror dragged on under the cover of “humanitarian bombing” and “saving” the women and children of Syria.

Bush turned the US’ last budget surplus into a big fat sucking hole from which the nation may never emerge – not without some deus ex machina like, say, a global pandemic that requires all the world’s nations to ban cryptocurrency and shift instead to digital currencies issued by their central banks (CBDCs) “because cybersecurity.” That last part is the actual thesis of an op-ed written by Robert Manning, a senior fellow of the Brent Scowcroft Center for Strategy and Security at the reliably pro-war Atlantic Council. You might remember Brent Scowcroft as an adviser to the elder Bush, and Manning as a Bush administration official from 2001 to 2008. Surely, it’s just a coincidence that it was published the same day as the ‘Bush as Vaccine Superman’ piece, but what a coincidence.

Now that Biden himself has out-spent Bush (and indeed out-spent any president in US history, pushing the country ever deeper into that sucking hole), his administration needs that miracle very, very badly if the country is to survive in its current form – which is unsustainable by pretty much every measure known to science but too delicious for the ruling class to put down. So: time to send Bush and Blair out to sweet-talk and intimidate every spare penny from every pocket, and use that aid as collateral to lock down whatever deposits of rare earth minerals they can get their hands on while they’re out delivering jabs in photo ops – the West is going to need them when they inevitably step on China’s toes.

Adding insult to injury is that this op-ed comes to us in the New York Times – the same paper whose star reporter Judith Miller laundered the bogus intelligence that got the US into Iraq in the first place. As Bush himself might say, “fool me once, shame on you…fool me twice…won’t get fooled again.”