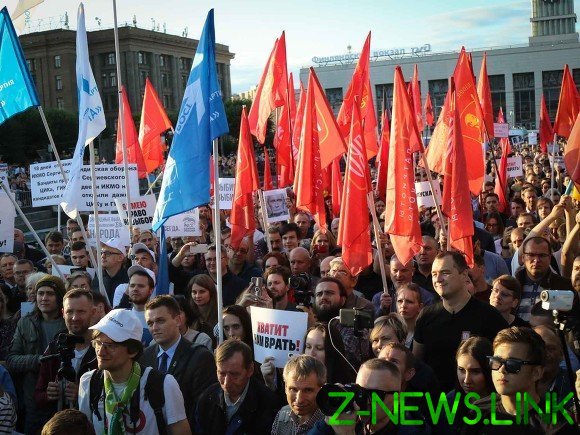 In Russia there is civic activism, does not need external leaders to develop a culture of peaceful protest. To fight him the authorities will be very difficult.

The closer the polling day, scheduled this year for September 8, the stronger boil overflowing passion. The election protests were held in several cities, and the last of them is unauthorized in Moscow — police detained more than a thousand people. Such a large-scale “vintilova” not seen since the Swamp area. Besides, law enforcement authorities have stated that the results of the proceedings against the detainees “will be decided in accordance with law.”

And it’s not an empty threat. Experience shows that the measures against those whom the government considers “troublemakers laws” can really be taken.

However, it is clear that no matter what the protests will continue. They have become a familiar phenomenon of civil life in Russia.

And here there is a clear separation.

If a rally, demonstration or picket is purely social in nature, the government may make concessions. Thus, residents of Yekaterinburg managed to defend the square in the city centre where it was planned to build a temple. Or, for example, after mass protests against raising the retirement age settings, the “reform” was somewhat mitigated. However, there is a suspicion that there the government simply retreated to prepared positions.

And still she retreated.

But if the protest has a political focus — like, say, the recent anti-corruption protests or the current stock that broke out due to the fact that the upcoming elections were not registered, many candidates from the opposition — that no concessions will not.

In fact, the only case when the government took a step back — a return of direct elections of the highest officials of constituent entities of the Federation after the protest of the winter of 2011-2012. The citizens to regain trust — so be it — to choose the provincial governors and heads of republics.

But first, the protests then swept a number of cities, and in Moscow an opposition March gathered more than 100 thousand participants. It seemed that this wave is about to topple the government. As there was no waver.

And secondly, the government immediately created the so-called municipal filter: candidate should collect in the support signatures of local deputies, most of whom were from the “United Russia”. It is not surprising that almost no independent or opposition policies, this filter can’t pass.

See also:  Artificial intelligence will give work to the people

That is, the elections of heads of regions has remained indirect and two-stage. As told to comrade Lenin: the form is correct, and in fact mockery.

In General the Russian government since 2011 clearly demonstrates that adheres to this principle: social demands, but for political will to respond.

And yet the actions of a political nature continue. Moreover — and scale, and their intensity gradually increases.

The authorities in Russia, as, indeed, in many authoritarian or formally democratic States, does not take into account important social pattern: when the standard of living in the country is becoming more or less acceptable, society switches from issues of basic survival to the problems of civil rights and liberties. The ascent on the Maslow pyramid: the needs for food and security to the need for recognition and respect, including from the authorities. For example, during the “Arab spring” in Tunisia or Egypt — the countries are quite prosperous by the standards of the Third world.

The same thing is happening now in Russia. In recent years, we have formed a strata of people making a request it for civil respect, and true democracy, not a distorted cunning bureaucratic manipulation. And since this natural phenomenon, the potential of such request will continue to grow.

Of course, the authorities can console themselves with the fact that this protest strata are relatively small. The recent rally in St. Petersburg drew only 3 thousand people (according to police — 2.2 thousand, according to organizers — 4 thousand, take the average). In Moscow, several more — from 12 to 20 thousand participants. Across the country and even in both cities the figure seems to be insignificant. No wonder the semi-official media are trying to present the protesters as a “bunch of troublemakers”, which only interfere with the Russians to live a normal life.

Here, however, are not taken into account three important factors.

First, due to the overflowing practice in such strata has already formed the “core” civic activism: community of thousands and tens of thousands of people who do not belong to any political parties, but linked by horizontal, network communication. If necessary, the Assembly of these “cores” can happen very quickly.

See also:  The police said, how many people participated in the "March of glory of heroes"

Second, in “nuclei” developing a culture of protest: without provocation, bullying and, especially, of the revolutionary barricades. The police usually nothing to complain about. But if she is abusing the violence, then it falls the anger of the Russian networks and independent media. However, the most important thing people have immunity to tyranny. As one of the participants of the Moscow meeting, “I regularly participate in such actions, saw the detention is not afraid to be afraid of tired already.” Or here is what another participant: “a lot of experience, but the main thing is the lack of fear in those who came. It is not there. This brand new attitude, he wasn’t at the Swamp.”

And third, as history shows, in the case of fluctuations in the political soil are “core” supporters instantly acquire, increasing their numbers in the tens and hundreds of times. So it was during the “velvet revolutions” in Eastern Europe was the Russian protest in the winter, so by the subjects during the “Arab spring”: the passionate minority was infected with their energy awakening the inert majority.

“Core” civil activism is a social loci of the future of the present, harbingers of the impending change.

The authorities are very hard pressed to oppose them. Point surgery — the removal of leaders — in this case ineffective. Online communities can function without “foreign” leaders, relying on voluntary moderators, spontaneously arising inside the core. But on a continuous repression, affecting tens of thousands of people, the current Russian government is unlikely to be resolved.

In fact, Russia is now formed a sort of militia, but on a new stage of history, on the basis of innovative network technologies. The militia, using not direct revolutionary action, not rebellion and street battles, and growing pressure on civil hamartomous power.

So that we may all come.

Russia’s history is not yet complete.