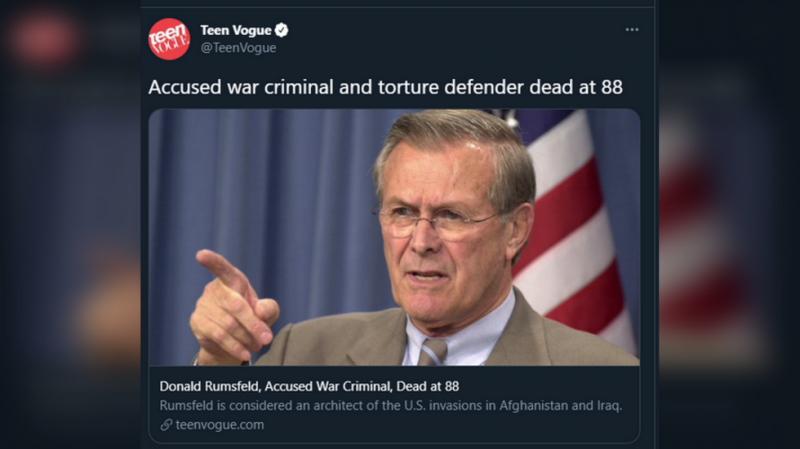 The publication marked Rumsfeld’s passing with a provocatively titled obit on Wednesday, whose headline immediately recalled war crimes allegations against the former official.

The article appeared on social media with an even bolder caption, this time also making mention of Rumsfeld’s strong support for torture during his time in the George W. Bush administration – which euphemistically labeled the practice “enhanced interrogation.”

Teen Vogue’s focus on the darker aspects of Rumsfeld’s legacy earned plaudits on social media, with readers hailing the site’s straight-talking approach while contrasting it with more tepid coverage from other corporate media outlets.

“Teen Vogue once again proving they’re more serious about journalism than the NYT, WaPo, WSJ, etc.,” one user said while sharing the obituary.

One observer even deemed the youth-oriented website the “new paper of record,” snatching the prestigious title from the Times and the Post, both of which went with more conventional headlines for their obituaries.

Others shared examples of more lukewarm coverage of Rumsfeld’s death, including from the Associated Press, which was slammed as a “stenographer of power” after hailing Rumsfeld as a “visionary” and “skilled bureaucrat” whose good reputation was “soiled” by the disastrous invasion of Iraq in 2003.

With his lengthy career including stints in the Navy, Congress as well as the Nixon and Ford administrations, Rumsfeld was also a key architect of the Iraq invasion, playing a major role in kicking off the broader War on Terror after the 9/11 attacks in 2001.

Rumsfeld’s vocal advocacy for torture gave rise to war crimes accusations both during and after his tenure with Bush, seeing two separate lawsuits filed against him in Germany beginning in 2004. Brought by former detainees at the notorious US-run Abu Ghraib prison in Iraq, as well as the American detention facility in Guantanamo Bay, Cuba, the plaintiffs alleged that Rumsfeld authorized brutal interrogation methods and was responsible for abuses at the two sites.

In 2012, a separate tribunal held by the Kuala Lumpur War Crimes Commission also found Rumsfeld and other top Bush officials guilty of war crimes in relation to torture carried out at Abu Ghraib and Guantanamo Bay.