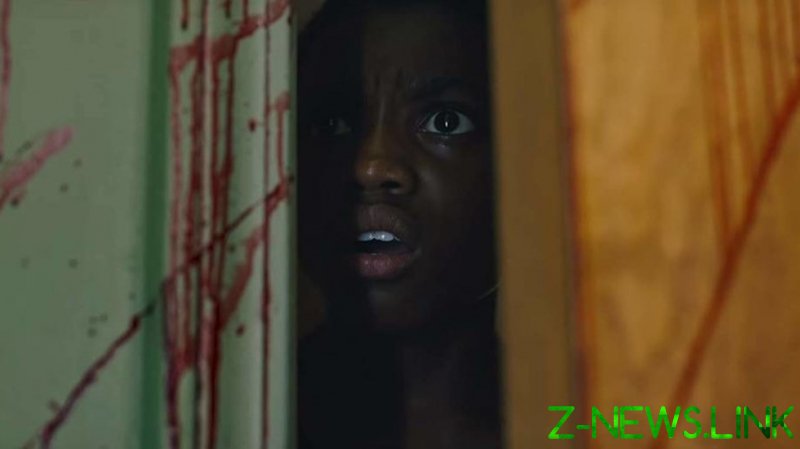 The new horror movie ‘Candyman’ made news this week for being number one at the box office, but it should have made news for how virulently it espouses hatred and violence against white people.

Candyman is a direct sequel to the 1992 film of the same name that, despite lackluster reviews and tepid box office, became a cult classic as its title character, the hook-handed, serial-killer demon conjured when you say Candyman five times into a mirror, was sort of the black Freddy Krueger.

The new film tells the story of Anthony, played by Yahya Abdul Mateen II (of ‘Aquaman’ and ‘The Trial of the Chicago 7’ fame), a black artist trying to navigate the white art world, who stumbles upon the urban legend of the Candyman and exploits the story for his new art project to murderous results.

The Candyman character/myth embodies black pain from white violence. As urban prophet Colman Domingo declares in the film, “Candyman is how we deal with the fact these things (historical white violence against blacks) happened… that they’re still happening!”

Candyman is one of those tiresome pieces of black grievance cinema for which the film’s co-writer and producer, Jordan Peele, who directed ‘Get Out’ and ‘Us’, has become so famous. It’s basically a celebration of black victimhood searching for catharsis through violence against whites.

Whether it’s obnoxious art critics, mean white teenage girls, or evil white cops, every white person in the film is irredeemably awful, and every one of Candyman’s 10 victims is white.

It’s no shock that a cinematic charlatan like Jordan Peele would want to update Candyman for the vacuous Black Lives Matter generation, as he’s made his career by ham-handedly playing the racism card and inciting guilt from white liberal film critics. These critics, an integral part of the woke entertainment industrial complex, then do their part by writing the most positive but unconsciously patronizing and paternalistic reviews of Peele’s middling and mediocre work.

Not surprisingly, like Peele’s other insipid creations, Candyman is generating a bevy of undeserved critical love. Peter Travers of ABC is a perfect example of the reflexively deferential assessments lavished upon the movie by white critics.

Travers opens his review with an eye-rollingly inane quote from director DaCosta, who claims, “On one level, the character is a myth and a monster, but as we know, America creates monsters out of Black men all the time.”

Speaking of eye-rolling, Travers signals his virtue so hard with gems like: “the Candyman spectre emerges as a symbol of community revolt against white violence to Black bodies,” I worried he might have given himself a hernia writing his review.

Not to be outdone, The New Yorker’s Richard Brody gushed: “The symbolic elements of this new ‘Candyman’ have a raw and furious power—the anguished bearing of witness and the burden of unbearable, unspeakable knowledge, and the silencing of it by the oppressive indifference of (white) society at large.”

When I watched Candyman, I saw none of those things; all I saw was a visceral and virulent hatred of whites cloaked in a didactic, pedestrian piece of Peele-esque racial political propaganda.

The film is one of those middling, moronic, mind-numbing messes of a movie where characters incessantly and tediously explain the film’s social and political views because the writers are viciously allergic to subtlety.

For instance, the main character, Anthony, titles his Candyman-inspired art exhibit ‘Say My Name’, which is an obvious nod to the ‘Say Her Name’ chants surrounding Breonna Taylor’s killing by police in 2020. How clever.

This level of obnoxiously dim-witted, simp-inspired anti-nuance permeates the entire ugly film, most particularly in the end sequence, which is so ridiculously and egregiously adolescent it actually made me laugh out loud in an empty theatre.

The funny thing is that critics like Travers and Brody actually do recognize that the film is an incoherent pile of excrement, but they’re such cinematic cuckolds, they force themselves to couch their criticism in long-winded, flowery praise of what they deem the film’s righteous political premise, instead of its egregious lack of execution.

For example, Travers admits, “You can fault the film’s heavy messaging but not its blazing passion for racial justice and the need to see the demon inside ourselves.”

In defiance of Travers’ decree, I fault the film not only for its heavy messaging, but also for its blazing passion for racial justice, because that blazing passion is what blinded the filmmakers and forced them to eschew entertaining for ‘educating’ its audience in the anti-white woke worldview.

Brody takes a slightly different route than Travers, and absolves the filmmakers of their amateurism by instead blaming the horror genre itself for the film’s fatal flaws.

“Yet for all its symbolic heft and keen-eyed flair, there’s a scattershot quality to ‘Candyman’ that has to do with the seemingly inescapable demands of its genre source. The horror-film combination of constrained tautness and calculated gore keeps some of the themes from fully developing and leaves narrative loose ends dangling.”

A more accurate assessment is that when a creatively bankrupt writer/producer (Jordan Peele) and an artistically and cinematically bereft director (Nia DaCosta) team up to exploit shallow horror intellectual property in order to push black victimhood and truly disgusting anti-white hatred, you get the noxiously stale nonsense that is the new Candyman.

My recommendation is that rather than watching this movie on a screen, you spend an hour and half trying to conjure Candyman through a mirror. At least then if the hook-handed demon shows up, you’ll be put out of your misery much sooner.