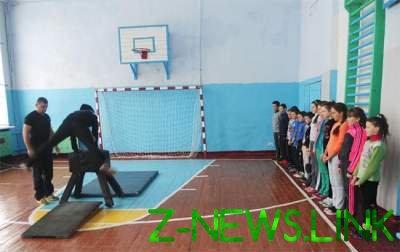 Children are severely punished for bad behavior in the classroom

At school №246 of the Dneprovsky district of Kiev physical education teacher made the students the entire lesson to hold over the head of the bench, due to the fact that they behaved badly. About the incident told Andrew Krutsenko on the page in Facebook.

“It “gym class” in school 246. Children in seventh grade were misbehaving and the teacher made the boys throughout the lesson to keep the head over the bench, and the girls too the bench, but just on the waistband in his hands he had compassion” – he wrote.

One of the students decided to film what was happening. The teacher noticed this and forced him to delete photos. The teacher threatened the students by twos. “The worst is not even the fact that this “teacher” deals with bullying in the classroom, and the fact that Viber-group of our class, some parents have supported these actions, arguing that the children themselves “ran” and “necessary” to punish,” said Krutsenko.

In the comments users have been advised to write and complain to teachers and parents to teach their children to say “no”. “How many inadequate are going to work with kids” – protested in the network. “One of your complaints is enough. Don’t forget to mention that the teacher was forced to remove the photo. It is also a separate issue – the psychological pressure”, – noted in the comments. “Parents have not taught children to say “no”.

I have to say the so-called teacher: “You are wrong, we refuse to do it!” But the children silently obeyed. Parents who do not raise slaves!” – added users.