Home / Video news / The Network showed the clashes of protesters and police near the Parliament. Video

The Network showed the clashes of protesters and police near the Parliament. Video 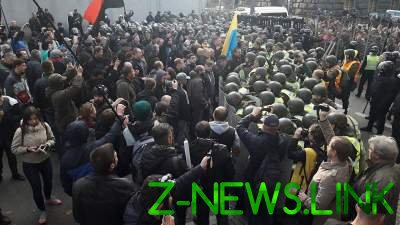 Order in the capital following about five hundred militiamen.

Today, June 19, in the morning at the building of the Verkhovna Rada began the action of miners, Chernobyl veterans and veterans of the war in Afghanistan. During the protests between protesters and police there were skirmishes.

This is evidenced by the recording on the camcorder from the scene of the clashes.

The video shows how protesters pull down police and beat them with feet and hands. Some used batons.

Recall that eight police officers and two protesters were injured in the clashes near the Parliament building in Central Kiev.

Order in the capital centre the following is about five hundred law enforcement officers, a dozen of the security forces guarding the building of Pechersk police Department. “The maximum number of participants, according to our information, when the event started, when I tried to go to the Verkhovna Rada, was about two thousand,” said the police.