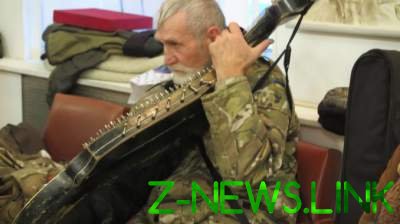 “Tikhon” is used in the plant.

Ukrainians moved by the story of 77-year-old fighter of anti-terrorist operation (ATO) in the Donbass Boris Miller from the Ternopil region.

So, the fighters of the group with the Callsign “Tikhon” is considered the oldest soldier in the ATO. The man was near the Donetsk airport, in the village of Starohnativka, and now – in Avdeevka.

According to the “Tikhon” to go to war it “forced” patriotism and concern for his people.

“To war I went with Maidana already “raked” so the explosions were familiar. In the end, what I was afraid of at that age? Of course, the APU (Armed forces of Ukraine – ed.) I would not take it. So I went to volunteer. All first laughed at the old man, but directly on the front line the attitude changed. By the way, Maidana went to war a lot of guys, including my two sons – Ustim and Daniel” – he said.

Fighter ATO added that he “felt compassion” for Ukraine, so he could not bear to watch the TV screen for what was happening at the front.

“For the first time to the front, and it was in the Sand, I came before the Baptism in 2015 without the permission of the command. Then the head of the “Right sector” in Rivne region Roman Koval was carrying aid to the volunteers and took me with him. There I stayed. Then Sand was hell, more than a hundred attacks a day. Later, officially, part of the 1st assault company of Dooku (the commander of the “Da Vinci”) fought in staroignatovke. Third time to the front in the industrial area of Avdiivka was hit as a sapper of the 5th separate battalion Ukrainian volunteer army, commander of the “Tokutaka”, – said Boris Miller.

The man said that it’s hard for the death of fellow human beings.

“In my memory often, there are images of people with whom yesterday talked. The soul weeps during the funeral, when you see the indescribable pain of mothers and wives, and especially children’s eyes, full of tears,” said “Tikhon”.