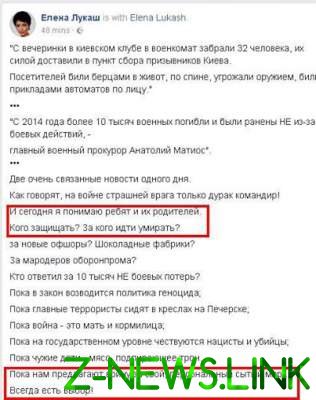 Ukrainians have found a reason to laugh.

The network has ridiculed the ex-Minister of justice of Ukraine Olena Lukash in her violent reaction to the scandal in the night club of Kiev, where police were looking for drug dealers.

Facebook users have left their caustic comments on the page Ukrainian political analyst Alexei Holomuzki, which is also criticized Lucas.

The ex-Minister of justice of Ukraine wrote about two related, according to her, the news of the day in the country: about the incident in the night club of Kiev, where police arrested 32 people and the message that during carrying out anti-terrorist operation more than 10 thousand military died and were wounded not for fighting.

“Two very related news one day. As they say, in war, a terrible enemy only a fool commander. Today I understand the kids and their parents. Whom to protect? For someone to go to die? The new offshore? Chocolate factory?” – written by Lucas.

“Lucas is in between the recipes of the salads, again, to throw,*VNOM. Here, was in a tragic pose on the “poor boys” of the expensive club where every second during the arrest, found drugs. Wrote that it “understands”! That, and she also? Not only brothers Dobkin “understand” observers rainbow unicorns?” – caustically responded golobutsky.

Netizens were in solidarity with the analyst. They ridiculed the former Minister of justice of Ukraine, suggesting that Lucas also uses drugs.

See also: American whole night spent in the freezer due to the unusual cravings

“So, too, Lenka sticks”, “salad you need to add dill and parsley, not hemp”, “Ball pressed”, “She’s girlfriend Irina does not want to see?” – commentators write.