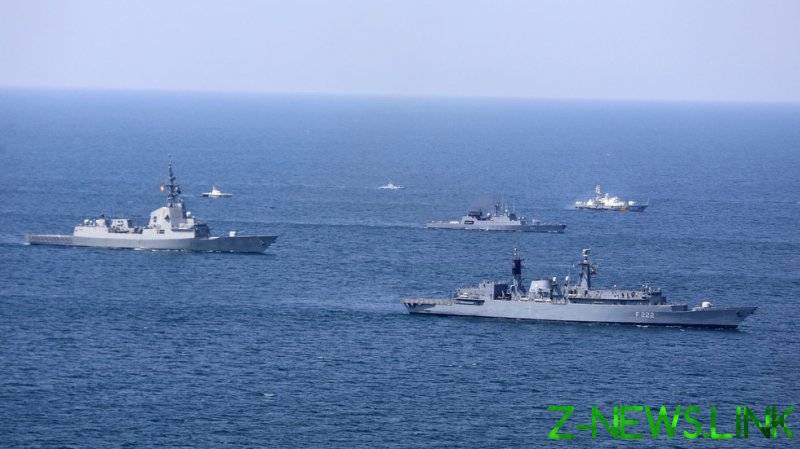 The question is: do some elements within the military alliance want it?

What makes the Sea Breeze 21 exercise of note, beyond its unprecedented scale, however, is its focus – NATO has specifically identified Russia as the target nation. “Since Russia’s illegal annexation of Crimea in 2014, NATO has increased its presence in the Black Sea,” a NATO press release noted. “NATO supports Ukraine’s sovereignty and territorial integrity within its internationally recognized borders, extending to its territorial waters. NATO does not and will not recognize Russia’s illegal and illegitimate annexation of Crimea and denounces its temporary occupation.”

According to US Chargé d’Affaires Kristina Kvien, of the US Embassy in Ukraine, the US is “committed to maintaining the safety and security of the Black Sea.”

This point was reinforced and expanded on by US Navy Captain Kyle Gantt, the deputy commander of US naval forces involved in the Sea Breeze 21 exercise. “We are demonstrating to the world that the Black Sea is an international sea,” Gantt said. “It is open and available for the free transport of commerce and shipping for all nations. It is not owned by any one nation.”

The exercise was controversial from the moment it was announced, with the Russian Defense Ministry declaring it would be closely following the maneuvers, and that Moscow would, “if necessary, react appropriately to the developing situation in the interests of ensuring Russia’s military security.”

Russia has, for some time, been pushing for NATO to cancel the exercise, claiming the scale and “clearly aggressive nature” of the maneuvers involved heightened the risks of unintentional incidents in the Black Sea while encouraging the “militaristic ambitions” of Ukraine. Russian diplomats have asserted that there was no need for an exercise of the scope of Sea Breeze 21, stating that any problem arising in the region could be solved by the coastal states themselves without imposing outside assistance.

The Black Sea is bordered by six nations: Bulgaria, Romania, Turkey, Russia, Georgia, and Ukraine. The first three are members of NATO, and Ukraine and Georgia are seeking to join the Western military pact. Twenty-seven of the 32 nations involved in the Sea Breaze 21 exercise have no territorial presence in the Black Sea.

The Russian concerns over the potential for “unintentional incidents” became a reality on June 23, when a British destroyer, the HMS Defender, undertook what it claimed to be an “innocent passage” through disputed waters off the coast of Crimea, only to be confronted by Russian naval vessels and aircraft, which accused the British warship of violating Russian territory. The Russians fired warning shots and, Moscow claims, dropped bombs close to the British ship, prompting its departure.

According to documents attributed to the British Ministry of Defense, the incident involving the HMS Defender was not unintentional at all, but rather part of a mission dubbed Operation Ditroite, and designed from the start to be provocative, triggering an “assertive” Russian response that could potentially turn violent.

“The important point is that we don’t recognize the Russian annexation of Crimea. This is part of a sovereign Ukrainian territory,” British Prime Minister Boris Johnson told reporters afterwards. “It was entirely right that we should vindicate the law and pursue freedom of navigation in the way that we did, taking the shortest route between two points, and that’s what we did.”

According to “secret documents” allegedly found near a bus stop, the British navy had considered an alternate route that would have skirted the disputed waters off the Crimean coast, but, while noting that this would have avoided confrontation with Moscow, it risked the British being viewed as “scared/running away” from the issue of Ukrainian claims over Crimea.

The incident involving HMS Defender raised the ire of Russia, with Deputy Foreign Minister Sergey Ryabkov declaring that “the territorial integrity of Russia is inviolable,” and Russia “will protect it both diplomatically and politically and, if necessary, militarily.”  He went on to say, “We can only appeal to common sense and demand respect for international law. If that doesn’t help, and if our colleagues don’t understand, we may not only bomb on course, but also on target.”

Driving home Ryabkov’s statements, the Russian Black Sea fleet undertook a drill designed to monitor the Sea Breaze 21 exercise, deploying some 20 aircraft and helicopters, including Su-24 bombers, and carrying out readiness tests of its air defense systems in the Crimea.

The chances of a military altercation between Russia and NATO within the context of the Sea Breeze 21 exercise are slim to none. The specific activities to be undertaken by the exercising forces have been announced and are well known to Russia. But the risk with Sea Breeze 21 is that it will imbue NATO and Ukraine with a false sense of security and purpose that may serve to diminish the seriousness of the Russian threat of direct military confrontation should a repeat of the Crimea “freedom of navigation” incident occur.

As the British Ministry of Defence noted, NATO does not want to be seen as tremulous in asserting Ukrainian territorial claims over Crimea. Sea Breeze 21 might just inject enough testosterone into NATO military planners to attempt a repeat – which would result in a sunken NATO ship, loss of life, and the kind of force-on-force conflict that all sides claim they want to avoid.