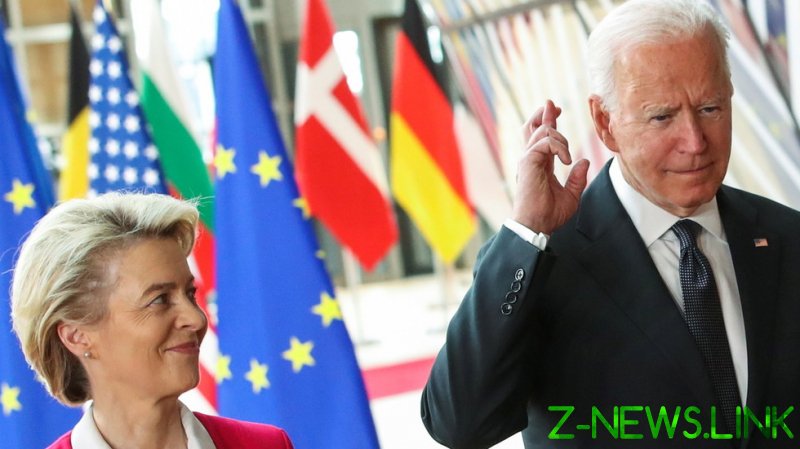 Representatives from the United States and the European Union will meet on Wednesday for the inaugural US-EU Trade and Technology Council meeting, a summit which is widely perceived to be aimed at China and was first conceived when Donald Trump was president.

The meeting has a broad remit, and will cover how the two sides can better cooperate on technology standards, supply chain security, IT, data governance, export controls, investment screening and global trade challenges. All are areas in which Beijing is seen as having increasing influence. In essence, the summit will try to establish ‘rules of the road’ for many emerging technologies.

Ironically enough, it comes within a couple of weeks of the US having scuttled a $90 billion nuclear submarine deal between France and Australia in favor of itself, creating a major diplomatic row across the Atlantic. Yet this week we are likely to again see European countries naively kowtow to US demands, effectively allowing Washington to set rules – which it may not follow anyway – instead of concentrating on their own relationship with China.

In the past few years, the US has waged a relentless campaign against Chinese technology firms and has frequently sought to enlist the EU as a part of this. Its efforts have had mixed results, but under Trump it most notably strongarmed European countries to exclude the Chinese firm Huawei from their 5G telecommunications networks.

The saga of Meng Wanzhou – a Huawei exec who was under house detention in Canada – is of course connected to this concerted effort. The US have made a number of serious claims to justify extraterritorial crackdowns such as this, which have also involved sanctions, blacklisting and export controls.

The US has argued that companies like Huawei are a mechanism for ‘espionage’ – without providing any proper evidence – that they constitute a ‘national security threat’ of sorts, are owned or linked to China’s military, or are more broadly associated with what it describes as ‘China’s unfair economic practices’ such as alleged intellectual property theft and state subsidized industry.

Such routine demonization has stemmed from America’s anxiety over China’s increasing influence in strategic global industries – which the US seeks to maintain undisputed hegemony over – and in light of this has come the effort to push Chinese companies out of Europe, which it sees as its own turf.

Some European countries have been more willing than others to accept this. The former Soviet bloc states in the East – excluding Hungary – have constantly bowed to US demands, whereas France and Germany have exerted a more independent resistance. Yet as a general rule, by taking this rhetoric as more than the mere extension of American interests, European countries have repeatedly shot themselves in the foot by ceding potential benefits to themselves for unilateral American gains, again and again.

Of course, the EU seeks a better deal with China suited to its own preferences, and has its own organic comprehension of what it would call the standards of ‘fair competition’ and regulations. The EU after all, has no qualms about taking action against US big tech companies individually when they flout these rules, as it showed when it stunned Apple with its proposed new rules for phone chargers last week. But that isn’t what’s going on here.

The US isn’t helping Europe exert a better deal with China; instead, under the guise of ‘transatlantic unity’, the US has frequently sought to undercut EU interests and promote its own.

To cite one example, America continually complains about the lack of market access in China, as Europe does too. Is there a mutual interest here? Sure. But when the European Union negotiated its own comprehensive agreement on investment (CAI), an exclusive European deal with China which offered its firms more market access, Washington protested this on every level.

This ranged from tweets by National Security Advisor Jake Sullivan – where the opposition was framed to look like cooperation –  to a mountain of commentary from think tanks and media.

Finally, Washington moved to sabotage the deal in March by weaponizing the issue of human rights concerns in Xinjiang and utilizing Europe’s own position on this against it to stall the CAI’s implementation.

The message? The US doesn’t really want Europe to develop a better deal or set of standards with China on its own terms; it merely wants to lock China out of Europe and advance the cause of strategic decoupling. This precisely is what the White House hopes the Trade and Technology Council will achieve. Europe is not seen as a rule maker, it is a rule taker.

As another example of how this kind of ‘cooperation’ backfires on Europe, the US has weaponized semiconductor supply chains to cut off or exert control over the export of semiconductor equipment to various Chinese companies. In 2020, it was found that under Trump, the US was using this practice to knock European firms out of the market and increase market share for American companies.

There is also the case of how the US used lithography patents to ban the Netherlands from selling extreme ultraviolet lithography machines through AMSL to China. The company was quick to protest, as it was aware China itself will eventually invent the technology.

Ultimately, America’s idea of so-called ‘technology cooperation’ with Europe against China is for the EU to foot the bill, make things harder for itself and sacrifice something of its own to suit the US. This position is exacerbated by the fact that the US and EU do not have identical technological capabilities, and due to their competing market interests.

The US wants to lock Chinese technology out of Europe, but also wants to lock European technology out of China to snatch their market access, making any partnership utterly self-defeating for the EU. America has all the cards when it comes to domination of the internet, semiconductors and so on, making any agreements fundamentally unequal, rubbishing the idea of ‘European strategic autonomy’.

Given all this, why should the EU cut off its own access to innovative Chinese technology, especially when Beijing has shown itself to be ahead of the US in certain areas? Sure, Europe can insist on its own terms, standards and conditions for whatever it buys and sells – but when you have someone else dictating what those terms are, serving a different agenda, then they cease to be your terms.

The more the EU gives way to the US, the less it can deal with China independently. If anything, the EU should be doubling down on its own core technological capabilities built on an independent pathway of patents and scientific development, which would give it the leverage of balance between both Washington and Beijing.