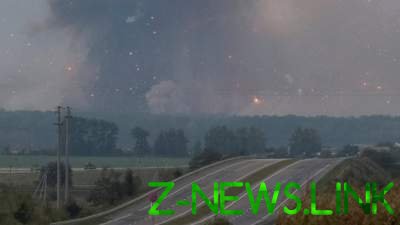 Ukraine suffered losses of hundreds of millions of dollars.

A large number of shells in Kalinovka were kept under the open sky, so that it does not recur in the future, it is necessary to build new underground storage. In the meantime, Ukraine has suffered losses of hundreds of millions of dollars.

This was told MP from the faction of the BPP Ivan Vinnik, the TV channel News One.

“The state lost today as a result of explosions of ammunition worth about 800 million dollars at market prices, even if we assume that they (ammo – “24”) are not new. It does not matter, exploding tank shells or ammunition for reactive systems of volley fire”, – he said.

According to the parliamentarian, in Kalinovka repeated the same situation for the third time.

“The authorities consider that a success, that they evacuate the population. But they have to do everything so that such cause was not” – said the politician.

As noted by the representative of the BPP, ammo would be harder to destroy if they were even buried in “the silo” because the storage apparatus in the open air greatly simplifies the work of saboteurs.

“In Kalinovka village was destroyed a large quantity of ammunition from the point of view of cost. An urgent need to build new underground storage and store ammunition,” concluded winnick.