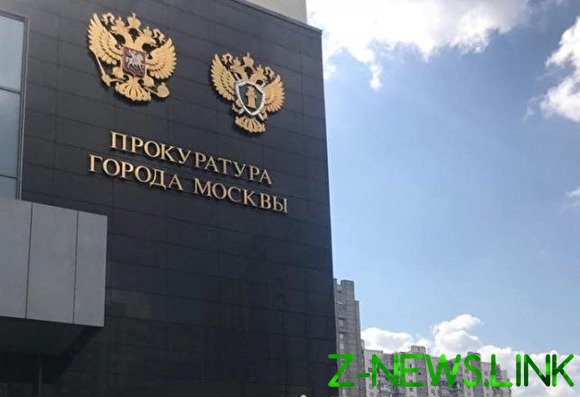 The Moscow Prosecutor’s office issued a warning to the lawyer of Fund of fight against corruption, non-registered candidate for the Moscow city Duma Lyubov Sobol, a note of caution when preparing 3 Aug action, according to the website of the Supervisory authority.

Prosecutors also pre warned about the responsibility for participation in the action. “Any attempt to hold on August 3, 2019, an inconsistent mass public event — a direct violation of the law. Law enforcement agencies will be forced to take all necessary measures to prevent provocations, riots, any action leading to breach of public security, creating conditions for threats to life and health of citizens”, — stated in the message.

Earlier with a request to refrain from visiting a possible rally to the residents and guests of Moscow addressed the Metropolitan police.

Recall that the original on 3 August it was planned to hold coordinated protest action was organised by the libertarian party, which is July 20, has already held a consistent rally for the admission of independent candidates for elections to the Moscow city Duma (it estimated the “White counter”, came about 15 thousand people).

Libertarians filed in the mayor’s office a request for approval of the action, specifying the venue of the rally in Lubyanka square. In the mayor’s office to coordinate this place refused, offering to hold a rally on Sakharov Avenue. Then the organizers in a letter to the mayor suggested other possible sites for the meeting: square of Free Russia, the Volkhonka street, triumph square. Representatives of the party reported that, on 30 July they were invited to city hall for talks about the rally. In the end, the negotiating parties have not found the compromise. At the exit of the city hall, was detained one of the leaders of the libertarian party, Michael Lights, and an application for action, the libertarians decided to withdraw.

However, at the Moscow headquarters of Alexei Navalny on Facebook stated that August 3 is planned to hold “a walk on the boulevards.” The time is specified from 14 to 17 hours. The scheme of movement: Nikitsky gate, Novopushkinsky square, pipe square, St. Pokrovsky gates square.

On the eve of the Moscow mayor’s office said that agreed to hold a rally in support of unregistered candidates to the Moscow city Duma on August 10 on Sakharov Avenue. In the release, it was reported that the application was filed by an unregistered candidate for Deputy of the Moscow city Duma Elena Rusakova. She Rusakov in social networks said that no approvals were not received. “Was in the mayor’s office to convey the appeal of the deputies and Chairman of the “Yabloko” Emilia Kabanovoy about security measures on August 3. The results of the conversation are not completely satisfied with. Discuss August 10 without security 3 Aug impossible”, — she wrote on his page in Facebook.

“The mayor’s office again issued an urgent press release about the alleged agreement of the rally on Sakharov Avenue (now on the 10th August) — what a lie! The second time the same layout; all in order to dilute the agenda and to divert attention,” he wrote on Twitter ally Alexei Navalny Leonid Volkov.