Home / INCREDIBLE / The meteorite fell on a house in Costa Rica

The meteorite fell on a house in Costa Rica 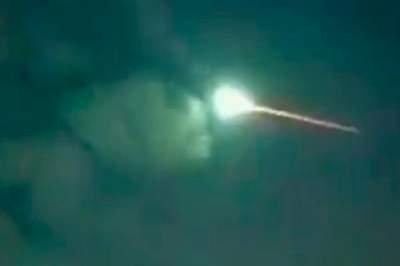 The fall of the meteorite weighing 1.1 kg occurred on April 23.

Scientists from Costa Rica confirmed that the cosmic body that fell on one of the houses in the province of Alajuela in the North, was a meteor or what’s left of it after passing the dense layers of the atmosphere. As reported by the Agency EFE, as a result of incident nobody has suffered, but the roof received significant damage.

The fall of the meteorite weighing 1.1 kg occurred on April 23 in the largest Canton of the country – San Carlos. According to local residents, that night they watched in the sky a bright flash of light. The Agency noted that this is the first discovery of a meteorite on the territory of Costa Rica.

According to preliminary analysis, a fallen celestial body refers to the sub-group of chondrites, the most common classification of meteorites. The composition of the chondrites is nearly the same chemical composition of the Sun, excluding light gases such as hydrogen or helium. They were formed directly from the protoplanetary cloud surrounding the Sun, by condensation of matter, and accretion – process of the increment of the mass of a celestial body by the gravitational attraction of matter on it from the surrounding space.

“It is likely that the age of the discovered meteorite is about 4.5 billion years,” – said in a joint statement, the scientists of the University of Costa Rica.

It is hoped that the study of the cosmic body will expand our knowledge about the formation and evolution of the Solar system.