The medics pulled out the bodies of the Hindu unexpected things 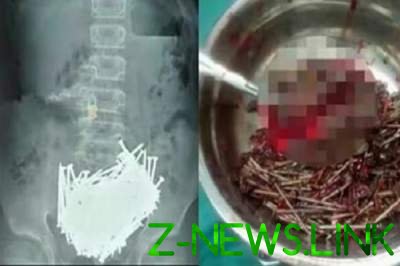 The doctors removed from the body of a Indian more than 600 foreign bodies.

Indian surgeons were able to remove more than 600 nails from the stomach of a patient suffering from a mental disorder. This publication reports the Chronicle.Info with reference on NDTV.

Unique operation was carried out by doctors of one of the medical colleges in Calcutta.

According to the surgeon Siddhartha Biswas (Biswas Siddhartha), the patient’s stomach was inflated and filled with nails with a length of about 2 cm each, so the doctors had to act with extreme caution. To retrieve sharp objects they used a magnet. The operation lasted for almost a day.

“He is mentally unstable and has a habit of swallowing all sorts of things. But we could not imagine that his belly will be so many nails,” he told reporters a relative of the patient.

The patient began to complain of severe abdominal pain last month, he was taken to hospital where ultrasound examination showed that the stomach was filled with sharp objects. After that, the doctors began to prepare him for surgery. She was successful, the patient was stable, said the TV channel.