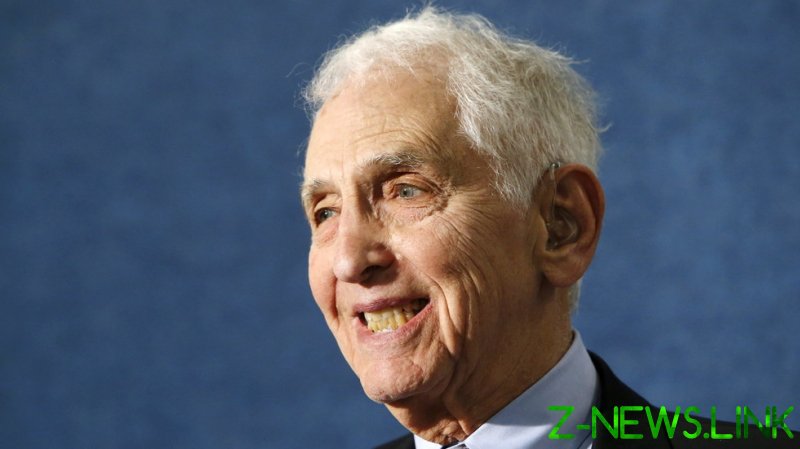 The documents, leaked by Department of Defense whistleblower Daniel Ellsberg, revealed that successive US governments had ever-increasingly ramped up aggressive attacks on North Vietnam in the years leading up to Congress officially authorizing the use of conventional military force against the country in August 1964, systematically lying to the media, the public, and lawmakers every step of the way.

Ellsberg’s leak triggered an intense debate about press freedom, national security, and freedom of information in the US, and set off a chain of events that ultimately led to the 1972 Watergate scandal, and resignation of President Richard Nixon two years later.

Its 50th anniversary was heralded with much mainstream fanfare, and understandable veneration of Ellsberg as a hero. In the process, the Nixon administration’s wide-ranging clandestine efforts to smear him, which began almost immediately after he publicly revealed himself to be the Papers’ source two weeks after their initial publication, were extensively documented – although there was a significant omission.

Famously, in September 1971 a team of White House-backed operatives (known as “plumbers” because they “fixed leaks”) broke into the offices of Ellsberg’s psychiatrist, Lewis J. Fielding, on an ultimately failed hunt for his confidential medical files, in the hope they would contain damaging disclosures about the whistleblower’s mental state, and sexual proclivities. However, not a single news outlet made reference to the concerted attempt to portray Ellsberg as an agent of Moscow.

The blueprint for this disinformation campaign was laid out in a “background paper” on Ellsberg and his lawyer, renowned civil liberties attorney Leonard Boudin, authored by former CIA operative Howard Hunt a month prior to the Fielding burglary.

Stating that the leaders of “North Vietnam, Red China and the Soviet Union were the undoubted beneficiaries” of the leaker’s “professional disloyalty”, Hunt drew staggeringly duplicitous parallels between Ellsberg and Klaus Fuchs, the physicist who passed classified information on US and UK nuclear research to the Soviet Union before and after World War II, among other notorious Cold War era spies.

“Although there is as yet no conclusive evidence that Daniel Ellsberg acted on specific instructions of the Soviet Union… the distinct possibility remains that Ellsberg’s ‘higher order’ will one day be revealed as the Soviet Fatherland,” Hunt wrote. “Turning again to history, one wonders whether, as the date of his trial approaches, Ellsberg will lose his nerve and flee to Communist asylum as did his fellow Cambridge alumni, Guy Burgess, Donald MacLean and Kim Philby.”

Thereafter, the Nixon administration deluged the media with incendiary quotes from nameless sources claiming secret evidence proved beyond doubt Ellsberg was a spy, an effort which culminated with White House aide John D. Ehrlichman repeatedly and falsely alleging to the Senate’s Watergate committee in July 1973 that the Department of Defense staffer had handed copies of the Pentagon Papers to the Soviet Embassy in Washington two years earlier.

Despite strenuous denials, the media – including The New York Times – continued publishing articles reinforcing the notion that Ellsberg was a potential Soviet informant for some time thereafter. They also repeatedly reiterated unsupported, anonymous claims that his delivery of the Papers to the embassy had been revealed by a high-ranking KGB double agent, without criticism or challenge.

Given that today it’s a well-established matter of public record that any and all suggestions Ellsberg collaborated with and/or was directed by Moscow in any way were entirely bogus, and part of a conscious and deliberate deception strategy, it’s somewhat mystifying news outlets have repeatedly fallen for the same false narrative since.

Whistleblower Edward Snowden was repeatedly accused of collaborating with the Kremlin by Western politicians and journalists, following his release of thousands of sensitive National Security Agency (NSA) documents in June 2013. The charges seemed very obviously custom-built to discredit him, and indeed the enormous contribution his disclosures made to public understanding of mass surveillance and industrial scale privacy violations by his former employer and its UK sister-agency GCHQ.

While they are seemingly forgotten today by-and-large, the same can’t be said of comparable accusations made against WikiLeaks founder Julian Assange. It’s now universally received mainstream wisdom that the internal Democratic party emails the organization published in June 2016 were hacked by Russian intelligence, and that he was a witting component of a conspiracy to throw that year’s election in Donald Trump’s favor.

The sole source for this accusation is the findings of tech firm Crowdstrike – its CEO Shawn Henry’s repeated admissions in December 2017 to the House Intelligence Committee that his company possessed no “concrete evidence” the files were hacked, let alone by Russia, went entirely unreported upon their public release in May 2020. Similarly, that the US Central Intelligence Agency possesses technology, dubbed the Marble Framework, which can falsely attribute cyberattacks to other countries including Russia, has never been acknowledged by a Western news outlet.

The media’s universal collective amnesia on the Nixon administration’s attempts to frame Ellsberg as a Soviet spy is thus entirely explicable. After all, it’s never easy to admit that you’ve been comprehensively duped in the past, particularly when doing so raises obvious and serious questions about whether you’ve been conned in precisely the same manner since. With so many careers and fortunes dependent on peddling sensational claims based on anonymous briefings and evidence no one is actually allowed to see, it’s no wonder the press think that some things are best left unmentioned, and unexplored.