Home / WORLD / ‘The man’s a magician’: Neymar dazzles with sublime passage of skill against Peru as he closes in on Pele record (VIDEO)

‘The man’s a magician’: Neymar dazzles with sublime passage of skill against Peru as he closes in on Pele record (VIDEO) 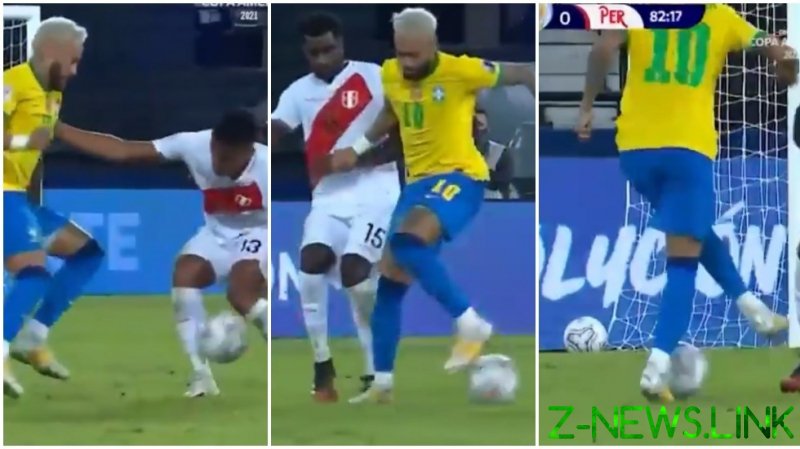 Facing their 2019 final foes in this competition once more, who they beat 3-1 at the Maracana to lift their first trophy in 12 years, the Selecao made easier work of their assignment on Thursday evening.

Juventus left back Alex Sandro opened Brazil’s account on 12 minutes, and then thanks to second half strikes from Neymar, Everton Ribeiro and Richarlison, Tite’s men sealed a 4-0 romp that demonstrated their dominance over South America once more, and kept them top of their group.

Making more headlines than the win itself, though, was a piece of skill from the Man of the Match that has already been seen and enjoyed 1.5 million times on the competition’s official account.

With less than 10 minutes to spare, ‘Ney’ was still having fun as the points appeared to be safe through a 2-0 cushion.

Faced back to goal, he puts his foot on the ball and then uses his other to nutmeg Renato Tapia.

Using his weaker right to hook the ball back into his path, and his upper body strength to keep a physical Tapia at bay, he then employs a variation of Zinedine Zidane’s Marseille turn to beat Christian Ramos and Tapia once more.

Performing stepovers as the pair approach again with Aldo Corzo lurking, the humiliation is brought to an end as Neymar is finally hacked down.

The damage had already been done, though, and fans took to the social media to shower the Santos academy product with compliments.

“The man is a magician,” beamed one.

“On his day, he’s something else….a joy to watch,” said another.

“The last exponent of the jogo bonito (beautiful game). I don’t know what will become of Brazil when Ney retires. Today they do not have players of that type. Magic  dribble,” it was also remarked.

But as is always the case with such a divisive figure, good vibes weren’t universal for the former FC Barcelona man.

Some thought the showboating was counterproductive as it amounted to nothing in the end, while a large chunk of detractors pointed to his fondness for going to ground before reminding us of his theatrics in Russia three summers ago at the World Cup.

“There was no other way this sequence was going to end than with a classic Neymar roll,” a critic pointed out.

“The last two seconds of that clip show you EXACTLY why he gets away with that footwork. You can’t make a challenge without the risk of him dropping after contact,” highlighted one more.

Still the 29-year-old himself was happy with his display, and the lofty feat of surpassing Ronaldo’s goal tally in the famous yellow and green shirt made him emotional at the full-time whistle.

“It is obvious that for me it is a great honor to be part of the history of the Brazilian national team,” he began in his post-match interview.

“To be honest, my dream was always to play for the national team, to wear this shirt. I never thought I’d [reach] those numbers. For me it’s kind of exciting, because I’ve been through a lot [in] these two years which were really hard, [and] complicated, and those numbers are nothing [compared to] the happiness that I have to play for Brazil, to represent my country, my family.”

Neymar also brushed on recent player opposition towards hosting the tournament in Brazil, after organizers Conmebol took it from Argentina and Colombia at the last minute to the coronavirus-hit country.

“We came here without knowing much that was happening. We didn’t know if there was going to be a Copa America or not,” he said.

“I will never say ‘No’ to my country. To disagree or have a different opinion from the others I think [we must have] respect for on another. We had our opinion. We expressed it. But we’re here. It was very complicated, difficult, but the joy of being on the pitch for the national team will always exist. Both me and our group, we’re happy,” he finished.

Now just 10 away from the all-time great’s tally of 77, Neymar also received praise in the highest of places from three-time World Cup winner Pele.

“Every time I see this boy, he is smiling. It’s impossible not to smile back. It is contagious. I, like all Brazilians, am always happy when I see him playing soccer,” the aging idol wrote on Instagram while sharing a photo of the pair.

“Today, he took another step towards my goalscoring record for the Selecao. And I’m rooting for him to get there, with the same joy I’ve had since I saw him play for the first time.”

“Thank you…you’ll always be our KING,” replied Neymar, with a crown emoji also thrown in.