Home / WORLD / ‘The man is a genius’: Chelsea fans heap praise on mastermind Tuchel after comeback win at Manchester City

‘The man is a genius’: Chelsea fans heap praise on mastermind Tuchel after comeback win at Manchester City 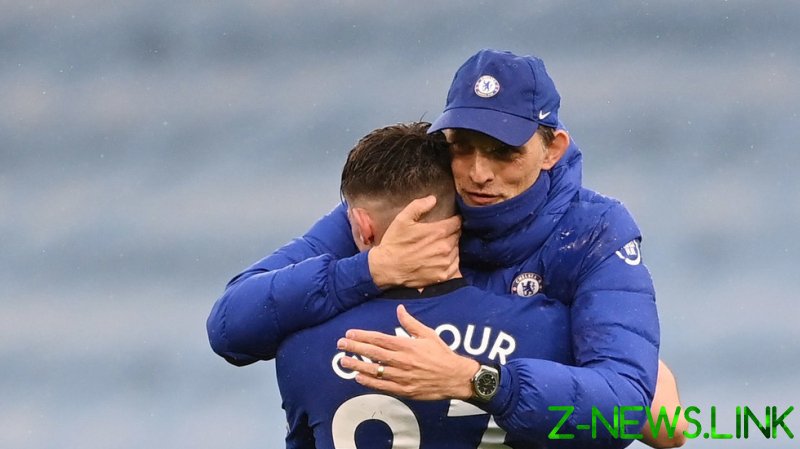 Heading down the tunnel at half time, the Blues trailed the English top flight leaders 1-0 after Raheem Sterling converted a spilled ball.

Given that Billy Gilmour had fouled Gabriel Jesus on the stroke of the whistle, the damage could have been double had Sergio Aguero not attempted a horrendous Panenka penalty that left City tactician Pep Guardiola fuming.

With a spot to play for in next season’s Champions League at risk, however, whatever his opposite number Tuchel had said to his troops at the interval clearly had a lasting effect.

Just under 20 minutes after the resumption of play, former Ajax star Hakim Ziyech, who had a fantastic afternoon, leveled the balance when Cesar Azpilicueta robbed fellow Spaniard Rodri of possession.

Completing a set of one-twos with Christian Pulisic, the full-back found acres of space down the right flank and pulled back to Ziyech who took just a touch before hitting a lovely driven shot into the bottom corner.

Deep into stoppage time, the 93rd minute to be exact, Chelsea again enjoyed success attacking the same wing with Timo Werner putting a chance on a plate for Marcos Alonso to hit home and steal the points.

Denying City the chance to seal the domestic crown, Chelsea leapfrogged a Leicester City outfit that were beaten by Newcastle on Friday by moving up into third on 64 points.

Pundits called it a “huge result” for Thomas Tuchel’s men, and stated that they might have City’s number after beating them twice in recent weeks ahead of a meeting in the Champions League final later this month.

“City will still win the title, but a few seeds of doubt will have be planted ahead of the big showdown in Istanbul,” wrote The Guardian.

Down in west London, and among Blues fans across the internet, jubilation on a par with that midweek when Chelsea beat Real Madrid 3-1 on aggregate in the Champions League semifinals took hold.

Praise for Tuchel rolled in, with the German genius now beating a string of world class managers including Guardiola and Diego Simeone twice plus Zinedine Zidane, Carlo Ancelotti, Jurgen Klopp and Jose Mourinho while conceding just a single goal.

One supporter dared to dream that had the ex-PSG and Borussia Dortmund man started the season at the helm, and not his fired predecessor Frank Lampard, Chelsea would be on their way to winning the Premier League too and not City.

There were lovehearts a plenty as photos were shared of Tuchel hugging his charges, and especially Gilmour who had given away the first half penalty horribly missed by Aguero.

That Tuchel trusts young players seems especially appreciated, and in his post-game interview, the coach admitted that the comeback gave the squad “confidence” with the UCL final three weeks away.

“It’s all about performance and confidence,” he added to Sky Sports.

“We know very well and I’ve said this before and will repeat it, we know that the final is a very unique game. You cannot predict what will happen so you need to be well prepared,” Tuchel said.

“This is what we have and this will not change ahead of the game,” he vowed.

“What a performance in the second half,” Tuchel beamed more specifically on the match itself.

“It was more or less an equal first half before the last five minutes where we almost had to give it away completely,” he explained.

“[But] if they score the penalty it’s probably over before it really starts.

“Then you go to half-time at 2-0 and have no chance to come back,” Tuchel pointed out.

“It was very hard because we were 1-0 down and had one injured player. By the performance in the second half I think we deserved to win,” he claimed.

“Big, big congratulations to the team for their performance, particularly [in the] second half,” Tuchel concluded.