Home / Society / The man and the helicopter. As Russian technical genius conquered America 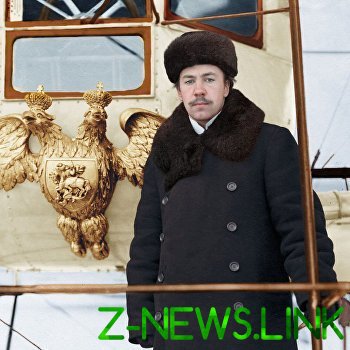 130 years ago was born the famous Russian aircraft designer, philosopher and visionary Igor Sikorsky. It was he who developed those systems that are now used, for example, in modern helicopters of the presidents of the United States and Russia. Indeed, the legacy of the famous aircraft designer who created the world’s first bomber, four-engine plane and a single-rotor helicopter, is the subject of our national pride.

A favorite of the king

In 1913, during the first flight created by Igor Sikorsky “Russian knight” (which became the ancestor of all multi-engine heavy aircraft in the world) over the surrounding area of St. Petersburg, the car covered a distance of just 100 km Today flights successors brainchild of Igor Sikorsky much bigger, at the same time his authority in creating heavy multiengine aircraft is undeniable.

Future scientist was born-aircraft 25 may (old style), 1889 in the family of the famous Kiev psychiatrist and psychologist Ivan Alekseevich Sikorsky, in turn, coming from a family of a poor rural priest. In youth three years studied at the St. Petersburg Sea cadet corps. There future aircraft designer graduated only a General course: in 1906, he goes home of Aeronautics in France, where six months studying at the famous Technical school of Duvignau de Lanno.

In 1907, the young man entered the Kyiv Polytechnic Institute and reading about the Wright brothers, a lot of work in his improvised aviation workshop, gradually beginning to grasp that aviation would become a matter of life. The eldest son and successor of the world famous aircraft designer Sergei Sikorsky testifies: “the Main step father on the way to the aircraft… were two books, read them at the age of 16. First – now little-known book by Jules Verne’s “Robur the conqueror”. The second spark in England found the old leather book containing the manuscripts of Leonardo da Vinci. There was one of his last works “Codex atlanticus”, which was painted a variety of pumps, including the famous picture of the helicopter”. In 1909 Igor Sikorsky once again goes to Paris to learn from famous designer and test aircraft of Ferdinand Ferber. Back in Kiev, he proceeds to an independent design activities.

Aircraft projects Sikorsky has interested the General-the major Mikhail Shidlovsky, head of the Russian squadrons and squadron and the former at that time head of the famous factory of Russo-Balt. Despite the age of the inventor (22), Szydlowski signed with it the contract on creation of the plane. At first it was projects small fighters. But soon Igor Sikorsky recognizes that Russia, with its harsh climate and vast expanses it is necessary to build a powerful four-engine aircraft.

In the autumn of 1913 aircraft with assistants represents the project. And the next day the aviation section of the plant begins to build the “Russian Vityaz”. It happened just after nine and a half years after flights of the Wright brothers. Nicholas II, according to historians, personally examined the “Russian Vityaz” and in the cockpit for half an hour talking with its Creator. A week later, the king sent a gift to the inventor a gold watch. Later Igor Sikorsky was awarded the order of St. Vladimir of IV degree. According to one version, the reason for the emigration of Igor Sikorsky in March 1918 on a British ship from Murmansk was the location to him the Russian Tsar. Another is the fact that after the collapse of the army, industry and the closure of the Russo-Balta aircraft in Russia can not develop for many years.

In March 1919 Sikorsky moved from France to the USA. At first, in America, Igor bad off, giving lessons in mathematics and lectures on aviation and astronomy Russian immigrants in night school. In 1923 in a former chicken coop one of the farms of long island (NY) aircraft bases in close contact with Russian aviation firm Sikorsky Aero Engineering Corporation, where he held the position of Vice-President.

The beginning of activity was quite troublesome. Thorough initial capital was not. The first aircraft in the United States was created by Sikorsky with fifteen Russian immigrants, who worked sacrificially for free. The outstanding Russian composer Sergei Rachmaninoff was personally involved in his enterprise, sent a check for $ 5,000, which was very considerable for those times the sum. In the archives there are several letters of the composer, which he calls Igor Ivanovich Sikorsky “the real Ilya Muromets”.

Until 1939 Sikorsky has created about 15 types of aircraft. The first major success of Sikorsky in America is associated with the plane-an amphibian S-38 (1928). Its modification S-42 and S-43 was filmed in the Soviet film “Volga-Volga”. The plane was so successful that the plant has received orders for 114 vehicles.

In 1939, the aircraft convinces the leadership of United Aircraft (now United Technologies, which includes Sikorsky Aircraft), it was time for the helicopter. Today the name Sikorsky is known around the world. For merits in the helicopter, the founder of modern aviation and Creator of the American helicopter industry in the US received the nickname of “Mr. Helicopter” (“Mr. Helicopter”).

Now the helicopters, including the Sikorsky helicopters are one of the foundations of the combat power of the United States. Himself Igor Sikorsky has attached great importance to the role of helicopters during rescue operations, during transportation of the wounded and sick, in the distribution of humanitarian and medical assistance during engineering works. Thanks to its helicopters, according to Professor Yevgeny Alexandrov, the most authoritative researcher of the contributions of Russian Americans in the history of the United States, saved over one million lives.

Helicopters aircraft made the first flight across the Atlantic (S-61, 1967) and Pacific (S-65, 1970) the oceans (with air refueling). Construction of the “Russian company” put a very high premium. Most of the orders were of this huge aircraft from Pan American.

Sikorsky is creating a new company – “Sikorsky aviation Corporation”. And, in an effort to support my fellow citizens first and turn dials to Russian. At the new plant in Stratford, where Russian built (including the means Sikorsky) Church of St. Nicholas (1942), with the main designer worked Gluhareva brothers, Michael Buivid, Nikolai Solovyov, Nikolai Kedrov, Nicholas Labinski, George Meyer, and others. From the firm’s Sikorsky came A. Nikolsky, N. Alexandrov, V. Prancing, who later became professors of major American universities.

Decades later, with the help of his countrymen, believed in it, Sikorski a kind of “materialized” at home. So, the famous helicopter S-58 was bought by Nikita Khrushchev in 1959, the American President Eisenhower, the first of heads of state began to use helicopters for personal use.

Documents and memories of compatriots tell us that the world famous aircraft designer, was active in the Russian community. Headed the Tolstoy Foundation and the Pushkin society of America, supported created in the autumn of 1923 Nicholas Roerich and the young Siberian writer Georgy Grebenshchikov in the village Churaevka (founded by Russian settlers in Connecticut) Russian publishing house “Alatas”. In 1931 there publishes “the Book of life”, the famous psychological readings of his father, Professor Ivan Sikorsky.

Sikorski has been an honorary member active in those years the Russian United mutual aid society in America (ROOVA) and the Society of Russian American engineers in the United States. He lectured about the latest developments in the field of helicopter in society “Science” with ROOVE, which consisted mainly of Russian peasants who migrated to America to work and strive for knowledge.

In the archives of the Tolstoy Foundation (a Russian emigre charitable organization established in new York April 15, 1939 by Alexandra Lvovna Tolstoy, youngest daughter of Tolstoy, with the aim of assisting the Russian refugees in the U.S. and Europe) there are documents proving that since the Second world war along with other well-known figures of Russian emigration – Prince S. S. Beloselsky-Belozersky, L. F. Magerovskii, P. A. Sorokin, K. G. Belousov – Igor Sikorsky makes a huge effort to rescue the Russian “de-pee” (abbreviation from the English. “displaced person”, “displaced person”).

Igor Sikorsky always had a great reputation in the Russian colony. The Russians, the Americans knew that he, like his father and grandfather, a lot of thinking over the problems of the universe and writes theological work. Few people know that Sikorsky is the author of books on philosophical topics: The invisible encounter (1938), The message of the Lord’s prayer (1942).

These works in our time have returned to Russia and caused a great interest among our compatriots. For example, in early 2011, the Russian readers in the House of Russian abroad named after Alexander Solzhenitsyn with great attention, took a collection of religious and philosophical works of Igor Ivanovich Sikorsky, “the Sky and the Heavens.” The collection contains four religious-philosophical works: I. “the Lord’s prayer. Meditation on the Lord’s prayer”; II. “The invisible war. The temptation of our Lord Jesus Christ in the wilderness, and human history”; III. “Soul evolution”; IV. “In search of Higher realities.”

In his works, Sikorski gave the task of comprehension questions about where to go the modern world and why the good remains good, evil – evil, death, death, and salvation – salvation. Date of writing “the Lord’s prayer. Meditation on the Lord’s prayer” (December 1941, and Connecticut) and the launch of the helicopter, invented by the Russian technical genius, in mass production, are the same. The author is a grandson of the famous Kyiv Orthodox priest, and an engineer-researcher, in continuation of almost two thousand years of theological traditions examines in detail the contemporary positions each element of the prayer “our father” and talks about its timeless relevance and enduring value for the soul of the Christian.

I should add that after moving to the United States, Sikorski was a parishioner of the Russian Orthodox Church, and subsequently transferred to the Russian-American Church. It is also known that Igor Sikorsky financial support for the construction industry in Stratford Orthodox Church of St. Nicholas (1942) and periodically sponsored one of the American Bible societies – Worldwide Bible Reading.

In 1938, famed aircraft designer, was entrusted to keep the speech to compatriots on the occasion of the 950th anniversary of the baptism of Rus. Citing Fyodor Dostoevsky and Vladimir Solovyov, Sikorsky admonished: “Russian people must not think about how to turn back to the fact that it did not prevail, apparently, not saved, and think about getting out of the swamp in which we now are stuck out on the road, to move forward”.

The achievements of Igor Sikorsky in front of the world aircraft industry and the United States was undeniable. In 1951, President Truman gave the famous aircraft designer, on behalf of the helicopter industry prize Colliers. Filename Sikorsky in Bridgeport (PCs CT) named the airport. There is a Historical archive of the name Sikorsky, The Igor Sikorsky Historical Archives. For their efforts the inventor has received numerous prizes, awards, certificates of appreciation and honorary memberships. In particular, was awarded the medal of honor of John Fritz, “For scientific and technical achievements in the field of fundamental and applied Sciences in the field of aviation”. This award was awarded only to two people — Orville Wright and him. He was also awarded by President Lyndon Johnson the National medal for scientific achievements.

Sikorski on the cover of “Time”. Photo: time.com

In the US, the name Sikorsky along with the names of Edison, Boehm, Fermi, O. and W. Wright, Pasteur included in the national inventors hall of fame. In 1988, the US Post office released a stamp aviation worth 36 cents with the portrait of Sikorski, the image of the most popular of its helicopters VS-300 and the inscription “Igor Sikorsky”.

The inscription on the tomb of Igor Sikorsky in the cemetery of St. John’s Church in Stratford reads: “occasionally, when visionary dreams embodied in human reality. Even less visionary person brings benefit to others in their calling. That man was Igor Sikorsky, the aviation pioneer, father of the helicopter, inventor and philosopher”.