Home / policy / The main principle. In any situation, the Kremlin is not interested in anyone’s problems and interests, but their own 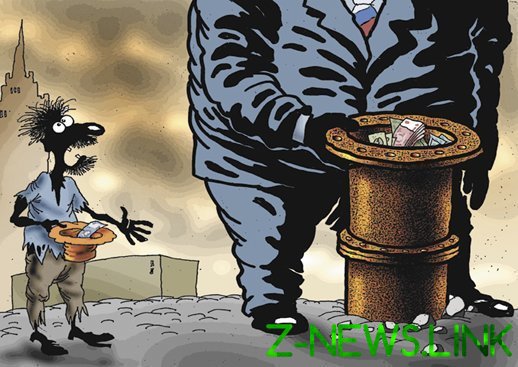 For many years, “the Kremlin” looting and loot distribution between “their”, but lied to the public about some stability and to accumulate resources for a rainy day. And so, when thanks to Putin’s buddy Sechin rainy day has arrived, it turned out that neither the population nor the mass dying business, “the Kremlin” to help is not ready. “The help” continues to be exclusively “his”.

Mishustin Prime Minister Putin instructed to study the question of how to compensate healthcare organizations lower revenues amid a decline in aid on obligatory medical insurance because of the “coronavirus”. Also, the government has allocated the Ministry of construction 352,4 million rubles to provide housing for war veterans. In fact, this is limited and all the “help” of the liberal KGB state in the dramatic fall of the ruble, Putin’s “holiday”, mass layoffs, and for many and deprivation of all means of livelihood. But “Kremlin” approved the list of so-called strategic enterprises, which are in excess to the taxpayers ‘ money. Of course, it’s the richest companies such as “Rosneft”, “Gazprom”, the user which receives millions of rubles every day as wages and bonuses, and others, like the American network “McDonald’s” and the bookmaker Fonbet. They will have access to preferential loans and state guarantees for investment projects, debt refinancing, and so on. Putin, as we know, does not throw accomplices.

As for the rest, their problems, “the Kremlin” is not interested in principle. Putin said that announcing the quarantine with pay employees, but the money for these salaries are not allocated. Accordingly, all expenses should lie on the business that this is absolutely not ready. Small and medium business exclusively on the words of promise to reduce the number of inspections, to provide interest-free loans to the salary, deferment of taxes for six months a moratorium on bankruptcy, but no one explains what to pay the salaries with no revenue. And the taxes, even six months later, you have to pay.

While the Ministry of Finance, represented Siluanov stands his ground, hoping that funds from the national welfare Fund NWF enough for spending budget by as much as six years even at very low oil prices. This is also confirmed by Mishustin – say, all social obligations will be fulfilled. However, the support of millions of workers sent on unpaid leave, apparently, the social obligation to “the Kremlin” is not. And the consequences of quarantine vacation just laying on the shoulders of employers, as at the time the obligation to pay state employees “may decrees” laid down on regions that this is still in debt.

The Minister of economic development MP said the government is not going to reduce budget spending, despite the reduction in revenues. And that, of course, false: the spending power is calculated in rubles, and the ruble, as you know, has depreciated. Accordingly, the decreased costs. The Finance Ministry now estimates it is now possible budget deficit this year of 3-4 trillion rubles.

Experts estimate liquid reserves the Fund, 127 billion dollars. All this money should be spent on helping the country’s citizens and businesses, only under this condition the loss to the economy would be minimized. However, they clearly will be spent mainly on compensation for “lost revenues,” oil security officers. The only way for the economy now is the active financial support of businesses and citizens. But this categorically does not wish to engage Putin and company. As a result, 90-e, which so often frighten the townsfolk Putin may soon see a majority of citizens bright at times.