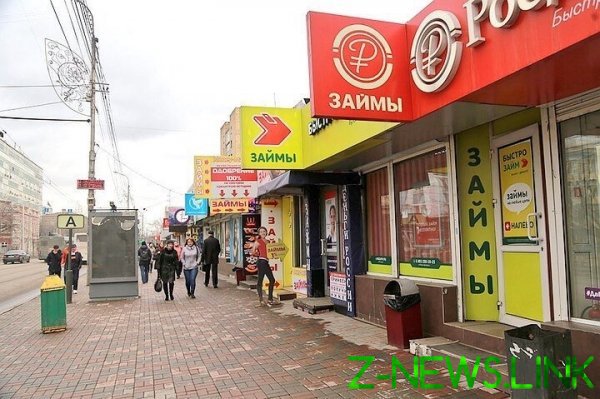 The Central Bank is seriously concerned about the rising level of debt load of Russians, which is close to the peak level of 2014. This was stated by the head of financial stability Department of the Central Bank Elizaveta Danilova, says RBC.

The aggregate debt level is calculated as the ratio of loan payments to income of the borrower. Now the figure is 9.9%. In 2014, the maximum was recorded at 10.4%. The Central Bank attributed the rise in the debt burden with the rapid growth of unsecured lending.

In 2018 the debts of Russians to banks increased by 22.4 percent to 14.9 trillion rubles, showing maximum growth since pre-crisis 2013.

According to official statistics, the poverty line today are 19.3 million Russians (13.2% of the population). Real incomes fall for the sixth consecutive year. For the last two years the number of citizens planning their future in the next five to six years, reduced from 17 to 11%. Over 60% of Russians are ashamed perpetual poverty in Russia.

At the beginning of 2019 due to the increase in VAT, the instability of the ruble and the increased cost of raw materials increased prices for food and alcohol. It’s also more expensive smartphones, apartments, gasoline, cars, cell phones, tickets, increased mortgage rates, increased utility payments. According to the forecast of the Central Bank, by the end of 2019,the inflation in Russia will make 5-5. 5%.