Home / WORLD / The latest victim of the pandemic? Vacations with the kids are gone for good, according to a depressing Bloomberg op-ed 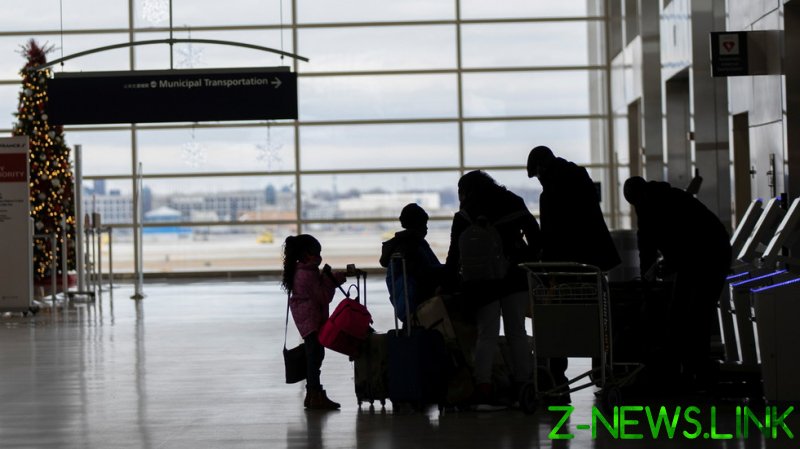 As if parents needed more subjects to stress about, writer Anjani Trivedi has reminded them that there’s an “ever-changing list of labyrinthine policies to allow travel,” from “home quarantines” to stays in government “facilities” that are more like prisons (try getting out of New Zealand’s). Sure – we somewhat expected the world was going to “reset” piecemeal, in “bubbles” or however one prefers to define it, and that means a year or two of chaos. But ‘let’s drop everything and freak out because we can never travel with our kids again’ is hardly where this is headed.

It’s not clear why the airlines mess has been framed this week as something requiring immediate anxiety, even though many parents are more concerned right now about the chronic vagaries of their kids’ back-to-school plans (including but not limited to those schools’ ever-shifting rules about tests and vaccinations and masks – similar, if not the same, as those of the inscrutable airlines). Trivedi mentions the uncertain fate of foreign domestic workers, “economic nomads,” and other groups that spend long periods of time away from their families due to the position they occupy on the global economic totem pole and how airlines’ refusal to commit to a single overarching policy leaves these people and not just these people) in limbo. However, she’s not addressing these groups, so much as the typical Twitter + Bloomberg audience, for whom the platform “boosted” the story as it has several Bloomberg stories of questionable psychological health over the past few months.

That audience consists not of dirt-poor African migrants who stake their and their families’ futures on the next big construction job in Dubai, nor “economic nomads” who can drop everything and relocate based on the appearance of desirable economic opportunities, but the “precariat.” These are the leftovers from the collapse of Western industrial capitalism who operate less from choice than from necessity, having fallen through the cracks of whatever is left of their society’s safety net.

Though of relatively recent vintage, the term describes a social class that has existed for decades, born from the vast swamps of economic insecurity and inequality brought on by deindustrialization and deunionization, coupled with the rise of private equity and the replacement of a manufacturing-based economy with a financialization-based one. Since one can only survive so long finding clever new ways to repackage and sell people’s assets back to them, that latter form of economy is doomed to fail for all but those at the very top. Chances are, after the one-two punch of Covid-19 and the suicidal government policies that addressed it, the precariat aren’t exactly rushing to plot their latest globe-trotting family vacation so much as they are trying to stay one step ahead of the debt collector.

In fact, parents’ experiences navigating the ins and outs of school policy post-Covid are just as likely to prepare them for the nonsensical Alice-in-Wonderland world of airline mandates being adopted (and rescinded) as global travel resumes in fits and starts. Some airlines have insisted a global “health passport” is a must for resuming world travel; others have insisted that will kill the industry. Rarely is it mentioned that children – and especially babies – are the least likely age group to get or transmit Covid-19, and thus worrying about how they are stashed aboard a plane is almost certainly less important than worrying about their parents.

As children age, they become more eligible for vaccines, and though the drugs in question remain available only under emergency use authorization, as the final stage of testing required for the US Food and Drug Administration remains underway – and many parents have expressed hesitation about signing their child up even if they themselves are willing to take the jab – this is once again a problem not unique to the airline industry. Indeed, in a logical world, the instinctive refusal to avoid touching our fellow humans that has arisen from the pandemic might inspire a bit of pulling back from the excesses of the post-9/11 Transportation Security Administration grope/zap/snoop industry.

Of course, people like the publication’s eponymous founder Mike Bloomberg don’t have to worry. With a private jet and multiple properties all over the world, he need not ask permission of anyone to bring kids – doesn’t matter whose kids – wherever he likes. This is not to suggest that the failed presidential candidate is some Epstein-esque pedophile, but merely that his publication feels no compunction about reminding its less well-heeled readers who the ‘friendly skies’ everyone used to be able to fly are really for. The rich, those who never have to ask the price, or even buy the ticket, because they own the ride. Just ask the international superstars who filed into Cannes earlier this month, their worries soothed by a $1 million anti-Covid security blanket of testing. Reducing the number of planes in the sky has always been a big part of the plan for “saving the planet” which, many of the rich seem to agree, is just too crowded, especially those exclusive vacation spots that were once inaccessible by anything but private jet. The sooner the hoi polloi start accepting their ground-bound fate, the less likely they’ll stage a rebellion from their pods.

Bloomberg and his ilk would never be so crass as to actually utter such words, of course. That’s what the euphemisms of the non-profit industrial complex are for, the impassioned diatribes of a Greta Thunberg and the self-satisfied patter of world leaders like the UK’s Prince Charles or US climate czar John Kerry. It’s why Bloomberg founded and leads the Climate Finance Leadership Initiative, which unites investment banks and insurance companies. Who better to save the world than the guys who fund the companies that are destroying it? Those who fly their own private jets from one exclusive destination to another talking down their noses at the public about how this is why we – the human race, as if they consider themselves a part of the same gene pool as Trivedi’s intended audience – can’t have nice things. Blame the plague! she concludes briskly, as if it was that simple.

Filming sad-looking polar bears on shrinking ice floes, or endless tides of plastic bottles washing up on the shores of once-pristine Indonesian islands, is not something the wealthy just do for fun, but something they do to put us in our place. It’s bad enough when we visit these destinations individually, the images say – but oh so much worse when we insist on bringing along our snot-nosed progeny.

At this point, the number of beloved human pastimes whose deaths have been blamed on Covid-19 nearly rival the number of human deaths attributed to the virus. However, fobbing off the theft of valuable aspects of the human experience on a respiratory virus is profoundly cowardly. If we can’t bring our kids on our next airborne vacation, the least we can do is ensure they retain the option to bring theirs along, years into the future.